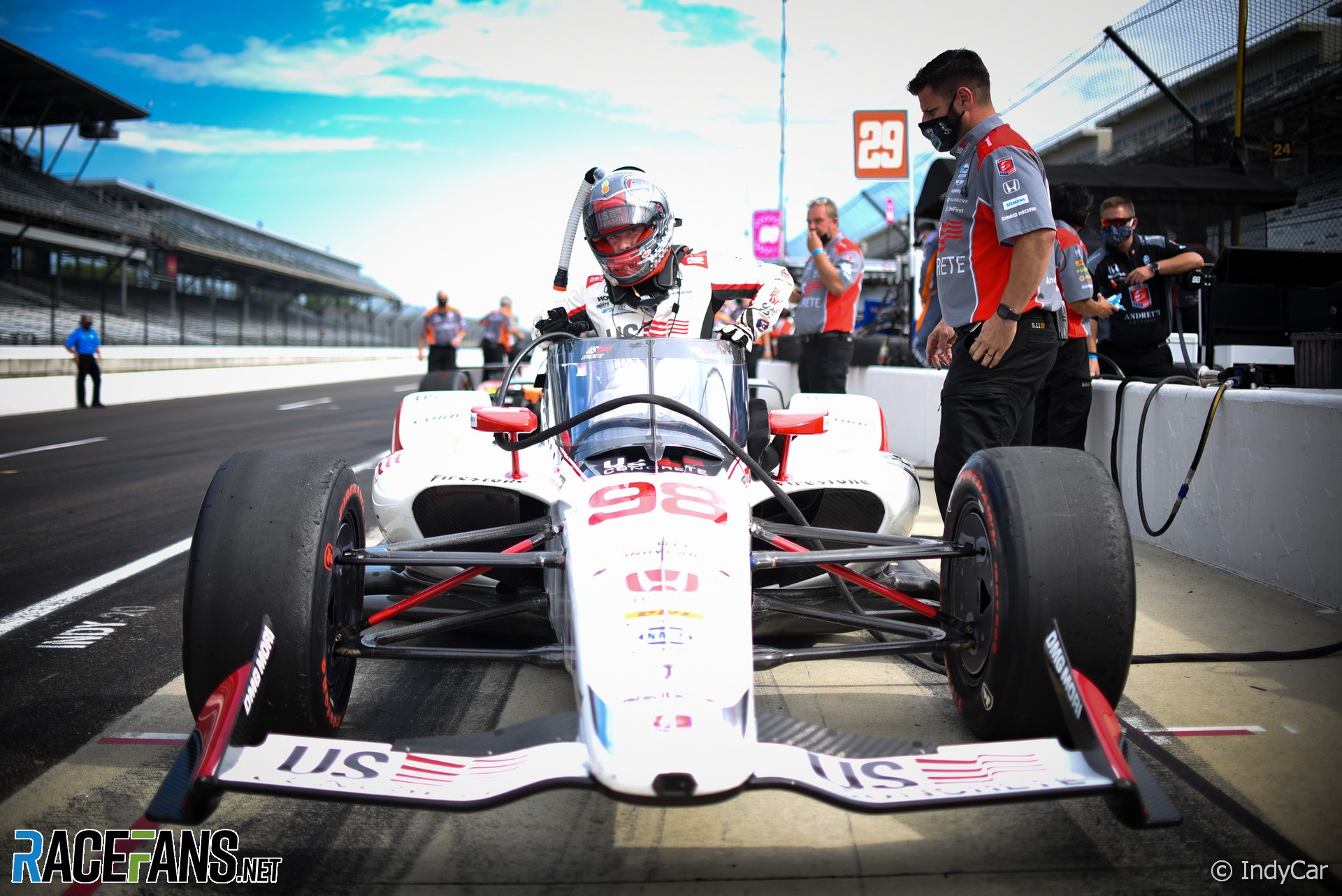 In the round-up: Andretti-Hondas swept the top four places in first qualifying for the Indianapolis 500 while Fernando Alonso, who unsuccessfully tried to get into one of their cars for the race, qualified 26th in his McLaren SP-Chevrolet.

The first day of qualifying for the Indianapolis 500 decided which drivers will compete for the top nine places on the starting grid on Sunday, and fixed the remaining places on the 33-car line-up.

Marco Andretti set the pace with a four-lap average of 372.323kph (231.35mph). He was the first of four Andretti-Hondas in the top four places, while only one Chevrolet-powered driver appeared in the ‘fast nine’. Remarkably, this was Ed Carpenter’s Rinus VeeKay, one of two rookies among the nine, along with Alex Palou for Coyne.

Palou’s fellow Spaniard Alonso could only manage 26th on the 33-car grid. Unlike last year, he and his rivals were at no risk of failing to make the cut, as exactly 33 cars entered. While Honda powered 11 of the top 12 cars, Alonso’s McLaren SP was one of 12 Chevrolets in the bottom 13.

Carlos Sainz Jnr said he’s missing the feeling of racing in front of his home crowd this weekend when asked by RaceFans:

Normally Spain has always been a very good hunting ground for me. I’ve always got really, really strong races here, very strong points. And I always feel a bit more nervous in this race, nervous in a positive way, because I see a lot of people cheering for me, like they call it in football the home advantage.

I don’t know if it has something to do with the feeling that I get here and the results I’ve scored here in the past. But I do feel like it’s too much of a coincidence. So I tend to incline that it does make a difference.

So for me this weekend, for not having them and not having the whole crowd here cheering for me, not having all those events that make your life a bit more stressful but also a bit more exciting with the public then it’s definitely different and I’m missing them. And I miss that feeling.

I still put pressure on myself and try to keep that feeling with the fans at home. I’m not sure, but I tend to think that it had a bit of an impact in the past.

|@Max33Verstappen: "Mate no power out of the [censored by FOM] last corner."
"Yep, understood. Ultra-slow lap please. It's not qualifying just yet mate. So slow lap."
"I know, but…" #F1 #SpanishGP

Alex Palou, on media call, notes that Spanish media are mostly focused on Fernando Alonso and not on him. Points out that news stories died out as Alonso slid down the time sheets.

Kimi Raikkonen: "The car felt a lot better and it gave me the confidence to drive it how I wanted. We made it to Q2 and we could have achieved even more, but we didn’t have any more sets of soft tyres so we had to use the mediums."

"Q3 was very tight and even if at the end I’m happy, inside myself I’m also a bit disappointed because you always feel like you could have done slightly better and maybe get a few more hundredths out of the car."

"Nicholas’s final lap was hurt a little by traffic in the final chicane, and George’s tyre preparation was compromised by the inevitable traffic jam in the last sector. However, the reality is that these things happen during qualifying sessions and the best defence is basic car pace, and we didn’t have enough of that today."

Does F1 need another new rule to make out-laps safer, or does the solution lie elsewhere?

They just need to ask Pirelli to make better tyres that don’t need to be babied as much as the current ones do.

They are far too temperature sensitive with far too small an operating window, That is the only reason they need to be driven so slowly to prevent them either melting and falling to bits or simply been outside the working range and therefore offering no performance.

Not even the extremely soft one-to-two lap qualifying tyres of the eighties and nineties were this extreme in terms of needing to be managed on the out laps. And back then you had more cars with vastly greater performance differences and a far bigger talent difference between drivers on far narrower, More dangerous circuits and much smaller mirrors without the benefit of GPS.

But of course like typical F1 they will probably throw a band aid over the ‘issue’ with a minimum lap time rather than actually working to fix the root of the problem. Another ‘Pirelli rule’ brought in that was never needed when F1 had proper racing tyres
@Roger-ayles