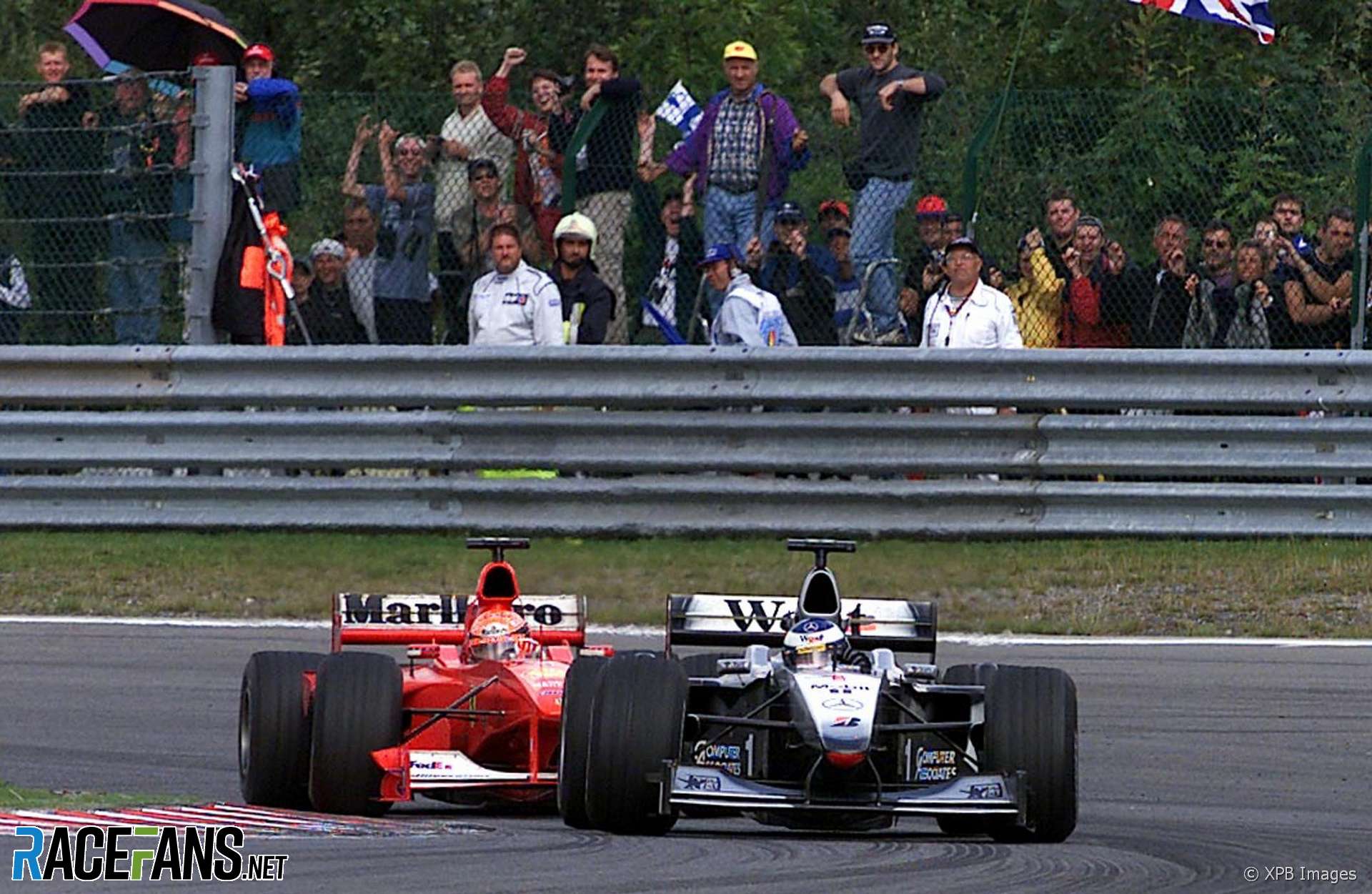 The tide of the 2000 season appeared to be turning as the car arrived at Spa-Francorchamps for the 13th round.

McLaren’s Mika Hakkinen had capitalised on a run of retirements for Michael Schumacher, who hadn’t won since the Canadian Grand Prix. Hakkinen had moved into the championship lead, two points clear of Schumacher’s Ferrari, with the second McLaren of David Coulthard still very much in the mix.

Although the title fight was exciting, and there had been a number of enjoyable and interesting races, many were craving a lights-to-flag scrap between Hakkinen and Schumacher. That all changed in Belgium, the Spa circuit serving up another classic race.

The might venue itself was under something of a shadow, having been omitted from the provisional 2001 schedule due to the country’s hardline stance on tobacco advertising. Its place was eventually reinstated for the following season, but the very fact it had ever been in doubt was a depressing indication of where F1’s priorities lay.

In hot, dry conditions, Hakkinen and Coulthard set the practice pace. Schumacher ran well, albeit eight-tenths of a second adrift of Coulthard on Friday. Rookie Jenson Button’s performances in the Williams continued to catch the eye – he was second-quickest in the final practice session. The drama was mainly confined to the Porsche Supercup paddock who had to abandon their weekend after practice due to concerns over their Pirelli tyres.

The weather held for qualifying where Hakkinen claimed a fifth pole of the season over seven tenths of a second clear of Jarno Trulli, who continued the Jordan tradition of strong performances at Spa. Button qualified third in the Williams, continuing his excellent weekend, and relegating Hakkinen’s main title rival Schumacher to fourth place, almost a second adrift.

Coulthard was only fifth, the McLaren driver frustrated as he felt he could have gone faster, while Ralf Schumacher completed the top six in the second Williams. Rubens Barrichello, who’d started on pole for Jordan six years earlier, could only manage 10th. Jos Verstappen, enjoying the closest thing he had to a home grand prix, lined up 18th ahead of the two Minardis.

In characteristic Spa fashion, Sunday produced a total change in the weather. Heavy rain greeted the drivers for the pre-race warm-up session. Giancarlo Fisichella had a big shunt at Stavelot, inverting his Benetton, and forcing him to start in the spare car.

By race time the rain had stopped but the track was still damp. This prompted the ten-novel decision to start the race behind the Safety Car, the organisers anxious to avoid a repeat of the carnage which occured two years earlier.

After a single lap the Safety Car released Hakkinen and the rest of the field. All opted to start on wet tyres save for Pedro Diniz. The majority decision was vindicated when the Sauber driver spun behind the Safety Car and plummeted to the back of the field.

As the field explored the tricky conditions, Barrichello took advantage of an error from Herbert to grab ninth. Hakkinen began to stretch his lead while Button put pressure on Trulli. Unfortunately for the Williams driver one attempt to pass the Jordan at the bus stop chicane opened the door for Schumacher to take third.

Hakkinen was soon 10 seconds up the road from the Jordan. Schumacher had to find a way through and at the start of lap six went for the inside at the La Source hairpin to take second. Button tried to follow the Ferrari but made contact with Trulli, forcing the Jordan into retirement.

By lap nine, with the track drying, the field began to pit for Bridgestone’s grooved dry-weather tyres. With the track in this state Schumacher excelled and began to close down Hakkinen’s lead. Then on lap 13 the McLaren driver hit a damp patch at Stavelot and spun, handing the lead to Schumacher

The Ferrari began to pull clear, leading by 11 seconds at half distance, but further pit stops for fuel would be needed. One reason for Schumacher’s early speed became clear as he pitted relatively early. Hakkinen reaped the advantage of running four laps longer on his last few kilos of fuel before pitting.

Ralf Schumacher was now up to third ahead of team mate Button, Williams enjoying one of their best weekends of the season so far. Coulthard was fifth with Frentzen in the sole remaining Jordan sixth.

Once the pit stops were completed the chase was on. Hakkinen, who’d made more concessions to dry weather running than Schumacher, inexorably reeled in the Ferrari. Schumacher, struggling, with his tyres was searching out wet patches to cool them down.

On lap 40 Hakkinen got his first shot at Schumacher drafting him down the Kemmel straight into Les Combes. Schumacher defended with his customary vigour, the pair touching at well over 320kph, causing slight damage to the McLaren’s front wing.

Hakkinen was not deterred, however, and as they hit the Kemmel straight next time around he tried again. This time they had traffic ahead in the shape of Ricardo Zonta. While the BAR driver commendably held his nerve and his line, the leading pair flashed either side of the BAR, Hakkinen seizing the inside line for Les Combes and moving into the lead.

It was an instantly iconic move, and a huge blow for Schumacher both in terms of the championship, and an on-track victory for a driver often considered less than a match for Schumacher’s formidable racecraft. Back in the pits after the race, Hakkinen let Schumacher know what he thought of his earlier Kemmel swerve in no uncertain terms.

The move sealed the win for Hakkinen, which he collected three laps later, along with 10 precious championship points. Ralf Schumacher took third, while Coulthard made a late pass on Button for fourth, and Frentzen completed the points.

Having enjoyed a 21-point lead early in the championship, Schumacher now trailed Hakkinen by six with four races remaining. It was by no means an insurmountable lead, but the momentum was unquestionably on the side of the reinvigorated reigning champion. Fourth pace for Coulthard left him 13 points adrift and now increasingly an outside challenger.