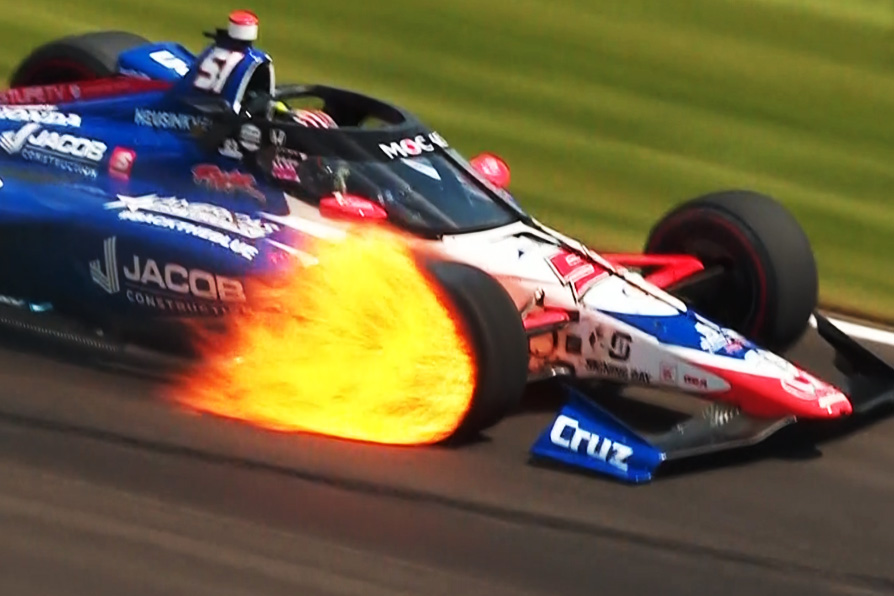 In the round-up: IndyCar driver James Davison praised the protection provided by the series’ new Aeroscreen after his bizarre brake explosion during last week’s Indianapolis 500.

Worth mentioning. We still don’t definitively know what caused the brake malfunction.

The data shows the front brake pressure slowly started on the pace laps. The moment I took the green it exponentially ramped to 250+ psi. Bizarre. pic.twitter.com/NMdxwyAJ5n

One year on. We’ll all be racing for you, Anthoine. We miss you mate!! #AH19 ❤️ pic.twitter.com/IgMePd4KRl

|@PierreGasly and others leave tributes for @AnthoineH at the scene of his crash during last year's @FIA_F2 feature race at @CircuitSpa. #F2 #F1 #BelgianGP #AH19 pic.twitter.com/NIbdk0UqSJ

Funny from @lance_stroll when @SChecoPerez admits he can't remember anything about @AIAPortimao, which he last raced at in 2009:

"The first corner is flat left…"#F1

Brazil is set to lose free-to-air F1 broadcasts next year as TV Globo will not extend its contract to show the championship.

"Wehrlein, who steps in at Porsche in place of the outgoing Neel Jani, made himself familiar with the 99X Electric at a two-day test in Germany alongside Andre Lotterer."

Nighttime F1 grand prix in Sochi may be exciting, but races to continue daytime - promoter (TASS)

"We still have time to evaluate how effective and economically feasible it will be, because the Grand Prix in the daytime offers numerous advantages and it still has the potential"

"Rimac has announced that Nico Rosberg, who became an F1 world champion in 2016, placed an order for the Rimac C Two in early 2019 after viewing the car with the company's founder and CEO Mate Rimac."

"We’ve watched other people win the Indy 500, and then they can’t get ready for the next race, but I’m confident we will come to Gateway strong. Takuma is the defending winner there; he did a great job last year."

'It’s all about balance,' says Sargeant, as he strives for more F3 wins (F3)

"In races, DRS is a massive advantage for the second driver. Because of that, it’s really important to try and build that gap, as it makes it much more difficult for the second placed driver to make a move."

Expecting Lewis Hamilton to do the same as competitors in others sports have done in America by boycotting this weekend’s race is unrealistic because of the differences between the sports, said RP:

I think there is a different dynamic between Hamilton, the Mercedes team, and F1.

Hamilton is the most visible and member of an international team and business. Thousands of people who are expecting a performance bonus. They have a complicated relationship with Mercedes, FIA, Liberty Media, race promoters, and fans. I can see why Hamilton does not want to let them down.

Contrast that to the NBA: 12 guys, training staff versus the owners. In a different country that is having a political upheaval.

I understand if he wants to take a different approach.
RP (@slotopen)