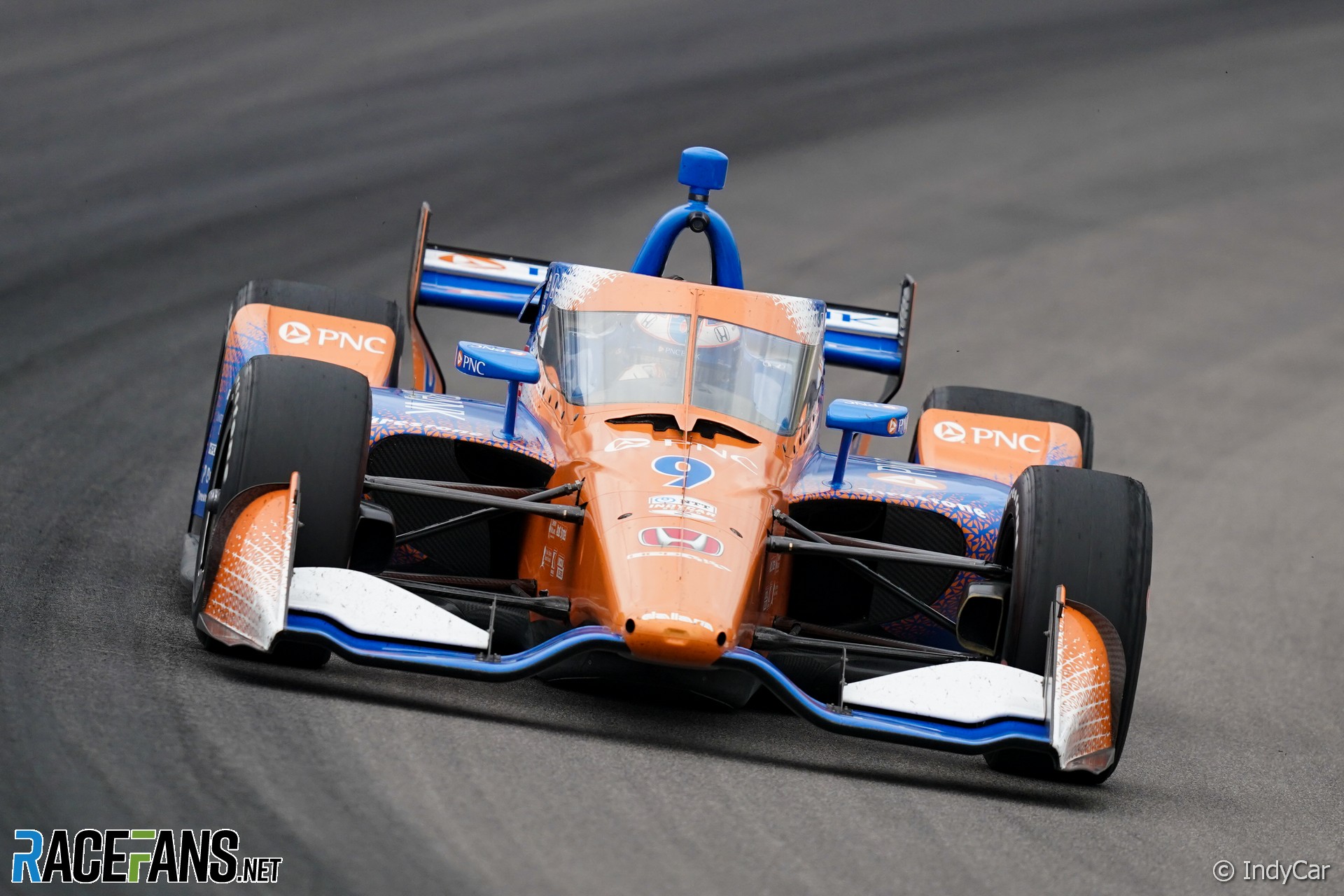 Just six days after losing the Indianapolis 500 to Takuma Sato, Scott Dixon made amends by holding off the RLL driver to win at Gateway.

The race got off to a shambolic start as a multi-car crash wiped out several drivers. As the field bunched up coming to the line, Alex Palou and Simon Pagenaud pulled out of the queue. Oliver Askew clipped Pagenaud from behind and sent him spinning into the consistently luckless Alexander Rossi.

Zach Veach then piled into the scene, ramming Marco Andretti into Ed Carpenter. Rossi and Veach were out, Carpenter’s bent car went behind the wall for extensive repairs, and Pagenaud limped on, only to be black-flagged later on as he was lapping too slowly in his damaged chassis.

Pole winner Will Power held the lead from Pato O’Ward when the race restarted on lap 13. They ran in that order until the first pit stops began under green flag conditions 50 laps later.

Power managed to lose two places at the stop: One to O’Ward who pitted the lap before him, and another to Dixon who came in two laps later. O’Ward therefore took up the lead, continuing McLaren SP’s strong recent run.

A sprinkling of rain caused a second caution period on the 109th lap of 200. This was bad news for Jack Harvey, who’d just pitted from fourth, costing him the two places he gained from Takuma Sato and Josef Newgarden on lap one, the further place he’d picked up in the pits, and several more besides.

The drivers pitted again under the caution period and Dixon’s straighter run out of his pit box almost helped him jump ahead of O’Ward. At the restart the McLaren SP driver briefly led a train of three Ganassi cars – Dixon, Marcus Ericsson and Felix Rosenqvist – but the latter slipped back after getting crossed up when Colton Herta went around the outside of him.

The field would have to make one further pit stop before the chequered flag. O’Ward and Dixon came in together, and this time Ganassi got the job done, handing Dixon the effective lead. But there was still a concern other drivers would run longer and try to jump them.

Takuma Sato attempted to do just that, but a slow RLL pit stop left him further back in the pack than expected. He quickly made amends with a fierce sweep around the outside of O’Ward, and began pursuit of Dixon.

With 10 laps to go Dixon had Sato looming in his mirrors, and the soon-to-be-lapped Santino Ferrucci growing larger in his field of vision. Despite the pressure from behind, Dixon resisted Sato to the flag, and grabbed his fourth win of the season.

Dixon’s lead in the title race is now up to 117 points, but Sato and the rest will have another chance to stop him running away with the championship tomorrow in the second race at Gateway.