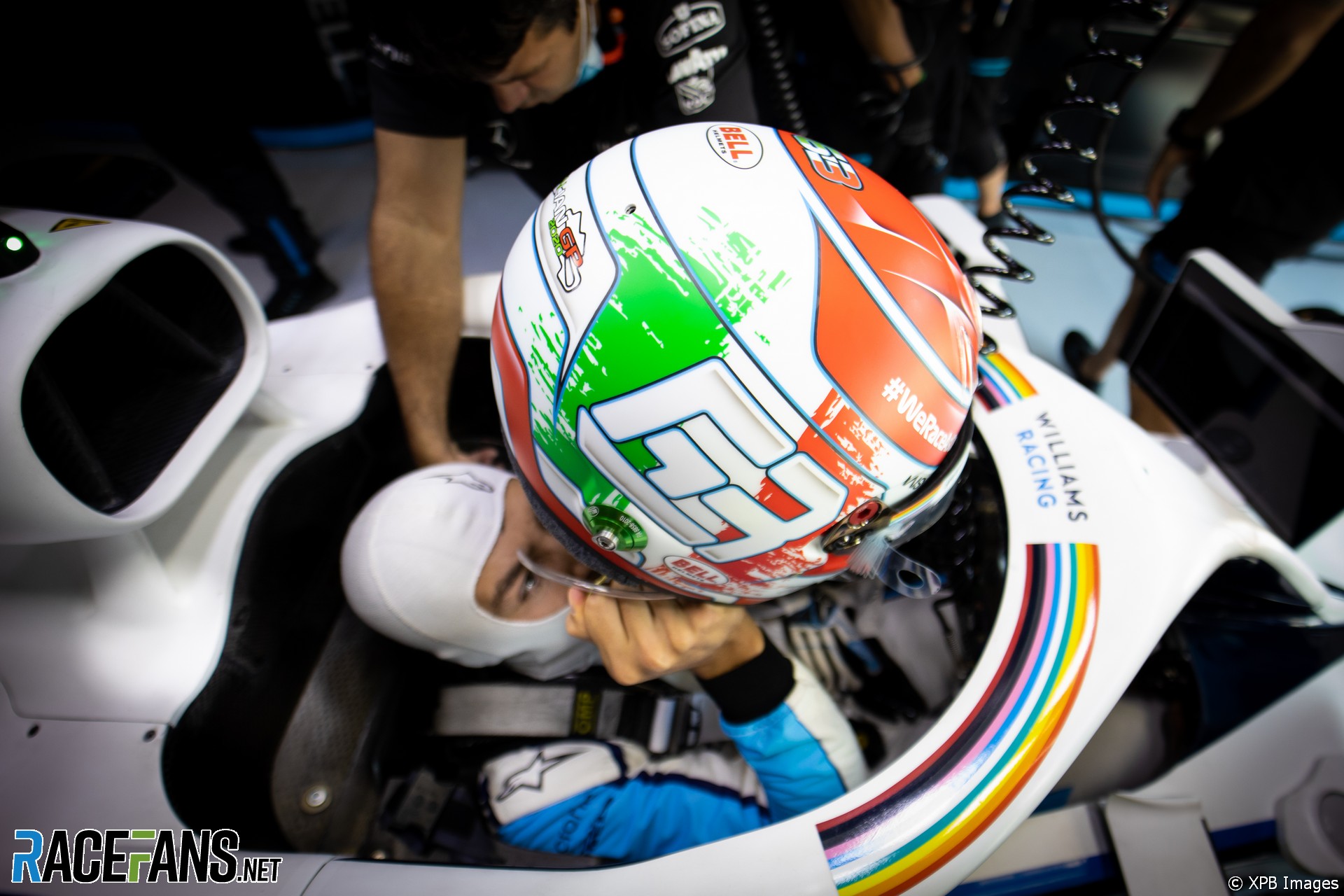 In the round-up: George Russell is confident there’s more time to be found from his Williams after experimenting with an “extreme” set-up in second practice.

Russell only drove in second practice yesterday after Roy Nissany drove his car in first practice:

I’m getting used to these one-sessions now. It was tricky out there, to be honest. We went quite extreme with the set-up for my second low-fuel run and it was too far, hence why I only improved one tenth compared to our second run.

So I think our pace is definitely than we shown on paper. I don’t think we are necessarily in the fight with Haas and Alfa this weekend, just the characteristics of this circuit do go against us but like I say, I think we can be there in the race and see what we can do.

Wanted to give you guys a little health update after my crash yesterday, I’m going to need a few months to recover, I fractured a couple vertebrae in my neck, as well as above my right eye. Thanks to everyone who has reached out, it means the world to me. I appreciate you all♥️ pic.twitter.com/Y43ftI43RN

Some v good advice from my good friends @Autodromo_Monza, but for the record it’s spelt as one word, so @RacingLines pic.twitter.com/UkcClcPOVW

Schumacher did a Verstappen, dropped it mid-corner and spun but he hit the barrier backwards. He's OK but that's ended the session earlier and Ilott is on pole! Tsunoda P2, Ghiotto P3.

Only Mazepin improved, got himself up to P6 before the red flag #F2 #ItalianGP

Nice Friday spent with Seb in the grandstands watching ourselves driving around in circles. pic.twitter.com/G3x9diVoYe

Severe withdrawal symptoms going on here. First Italian GP at Monza I've missed since 1974. Mind you, not sure I'd want to be there without the madness of passionate fans who help make this extraordinary place what it is. #ItalianGP #F1

Today it should have been my pole, I did an incredible lap, I was proud. Unfortunately I took a five grid place penalty. So disappointed by this decision.
Tomorrow I will start P2 because some guys behind me took also a penalty.

Tex, who is listed as employee number eight in McLaren’s records, has decided to retire from McLaren Racing after an incredible 55 years of service. pic.twitter.com/QuQWF1OIMt

"Today was by far the best Friday since the start of the season. We were sixth this morning and fourth in the afternoon, and I must say the feeling in the car was really good! I could push and managed to put in some good laps. Unfortunately, we had a small issue with a damper at the end of the session while doing the long run, so we had to stop a bit earlier than the others, but generally speaking, we are pretty happy."

"Pocono Raceway eclipses 30 Million kWh and achieves 75% waste diversion, whereas waste is diverted from landfills to be recycled or composted."

"The FIA and Formula 1 can today confirm that between Friday 28th August and Thursday 3rd September, 5,704 tests for COVID-19 have been performed on drivers, teams and personnel. Of these, 2 people tested positive. The FIA and Formula 1 are providing this aggregated information for the purposes of competition integrity and transparency. No specific details as to teams or individuals will be provided by the FIA or Formula 1 and results will be made public every 7 days."

"I'm really proud. It was one of my goals before the end of the season to get pole position. It feels amazing in Monza. This track is amazing, so big thanks to the team. The lap was amazing. I had a big tow, and everything was good, and then my first pole. Super happy."

Will the drivers avoid a repeat of last year’s qualifying mess today?

How did they qualify here years ago with more cars on the grid years ago? Slipstream may be more beneficial now but it isn’t hard at all to get the more important job done in everyone does the sensible things and themselves a little further apart and don’t go all at once.

I think some smart teams in Q3 may leave earlier than the rest that all wait until the last moment on their second attempt.
Ben Rowe (@thegianthogweed)

Happy birthday to Maciek and Us_Peter!