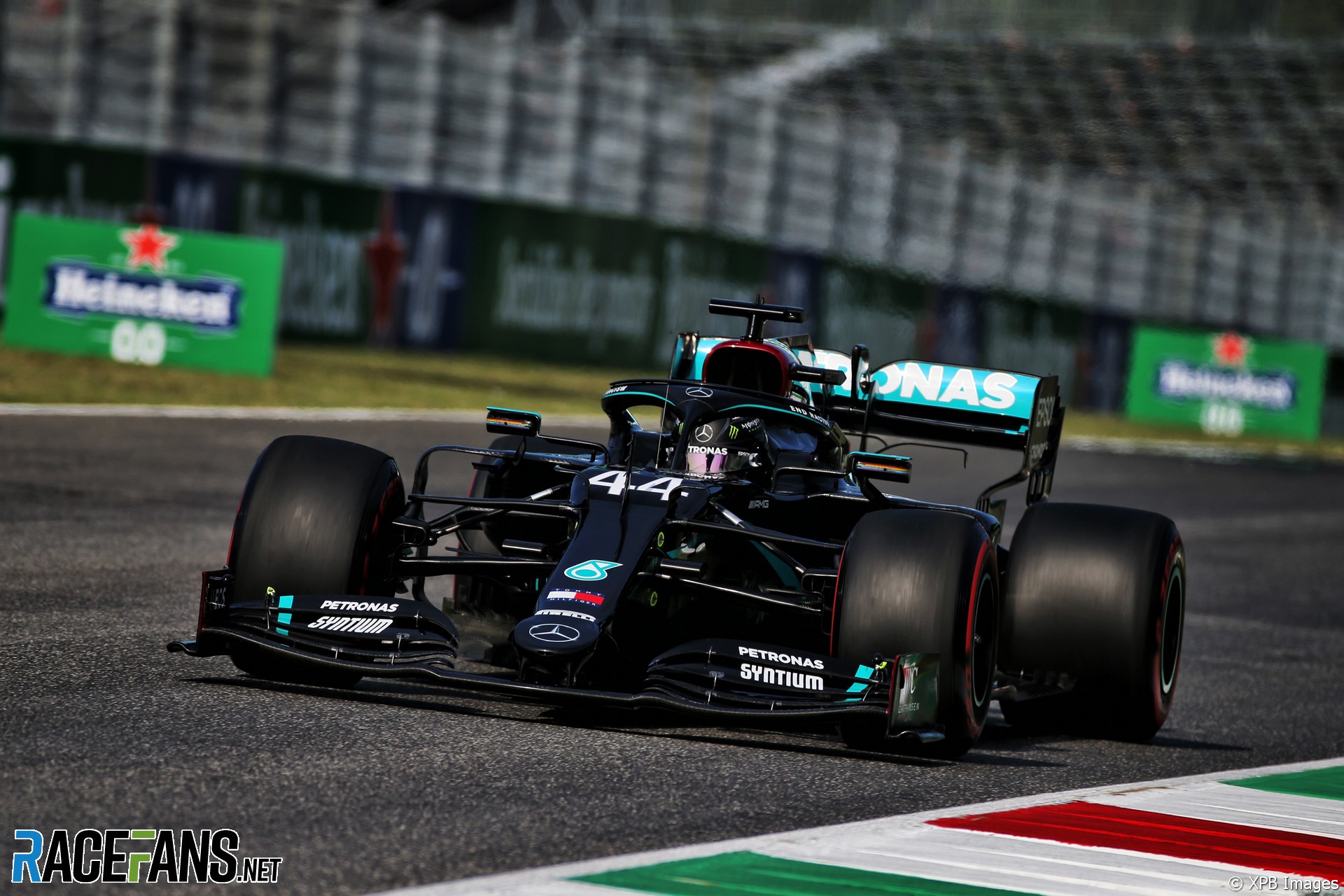 The pair traded times separated by hundredths of a second, but the battle was decided in unsatisfying circumstances when Esteban Ocon spun, bringing out the yellow flags and forcing Bottas to abort his final run.

Having swept all three practice sessions, Bottas remained the driver to beat at the start of qualifying. But there was very little in it – his opening effort of 1’15.749 was just 29 thousandths of a second faster than Hamilton managed.

Max Verstappen put his Red Bull third, but well over half a second off Bottas, separated from team mate Alexander Albon by the Racing Point pair. Lance Stroll, the only RP20 driver to have the latest aerodynamic specification on his car, initially led his team mate.

Sergio Perez did an extra run which put him ahead of his team mate, though neither were under threat of being eliminated in the first round.

Nicholas Latifi, enjoying a strong weekend in the Williams, held 13th ahead of the final runs, putting him ahead of Sebastian Vettel, Lando Norris and Monza winner Pierre Gasly. George Russell, who had been unable to set a time in final practice due to a brake-by-wire failure, was 18th ahead of the Haas pair as the last laps began.

Russell dropped two wheels off the track at Savelli but kept his foot in and managed to improve his time. It wasn’t enough for him to make the cut for Q2, though he did sustain his record of out-qualifying his team mate.

“Not enough, not enough, sorry guys,” he said. “How the hell we finished that I have no idea. I think I damaged the rear.”

“A bit of off-roading probably didn’t help that,” he added, thanking the team for repairing his car between sessions.

Vettel was the last driver to claim a place in Q2, and he took it at the expense of Gasly, who was frustrated at failing to make the cut.

Romain Grosjean was aggravated at being overtaken by both Alfa Romeos immediately before starting his lap. He made it through to Q2, but was not impressed. “There’s no rules, but that’s just not good.”

It remained close between the Mercedes drivers in the second part of qualifying, but this time Hamilton moved ahead, by just 13 thousandths of a second. Verstappen was in the hunt as well, improving to just over a tenth of a second away from the Mercedes, but was frustrated at being held up by Stroll as he left the pits.

Daniil Kvyat and Carlos Sainz Jnr were left in the drop zone after their first laps, the pair setting identical times of 1’16.854. Sainz complained about the time lost in traffic on his lap, which left him almost two-tenths off his team mate, holding the final spot in the top 10.

With a clearer final run, Sainz improved to 10th, which was enough to edge his team mate out of the top 10. Kvyat failed to improve his time after going off at the same corner Russell had, only more so. Raikkonen matched Kvyat’s time but will start behind him having set it later.

Sebastian Vettel also went no further, though Charles Leclerc ensured at least one of the Ferraris would start inside the top 10 for the team’s 1,000th race.

Grosjean, who had been 10th quickest in final practice, was frustrated at ending Q2 in last, particularly after being called to the weigh bridge again and losing time at the start of his lap. “I don’t know where the competitiveness from practice three has gone,” he said. “But starting the lap four-tenths down is never ideal is it?”

All drivers ran the soft tyre, which offered a lap time improvement of around nine tenths of a second over the medium, putting them on the same compound for the start of the race.

Hamilton held his advantage as Q3 began, but the gaps remained very slim. Bottas was fractionally quicker through the first sector, but Hamilton regained the advantage over the rest of the lap. Even so, the two black cars were separated by less than six hundredths of a second at the line.

Verstappen couldn’t beat his best time from Q2 with his first run. Asked where the team could improve his balance Verstappen said: “It’s fine, I just didn’t have grip.” Albon was fourth after the first runs, while Perez ran after the first group of drivers and set the fifth-fastest time.

Hamilton didn’t get off to a great start with his final run. He was fractionally slower in the first sector, but improved through the middle of the lap. However the contest for pole position was decided when Esteban Ocon’s car snapped sideways at the exit of Poggio Secco.

The Renault stopped by the side of the lap as Bottas arrived on the scene and had to back off. “Shit,” he exclaimed as Hamilton’s pole position was secured.

Verstappen did improve his lap time, but stayed third, Albon backing him up in fourth. Leclerc claimed a superb fifth for Ferrari, ahead of the Racing Point pair. Perez led Stroll, though his one-place grid penalty will drop him behind his team mate.