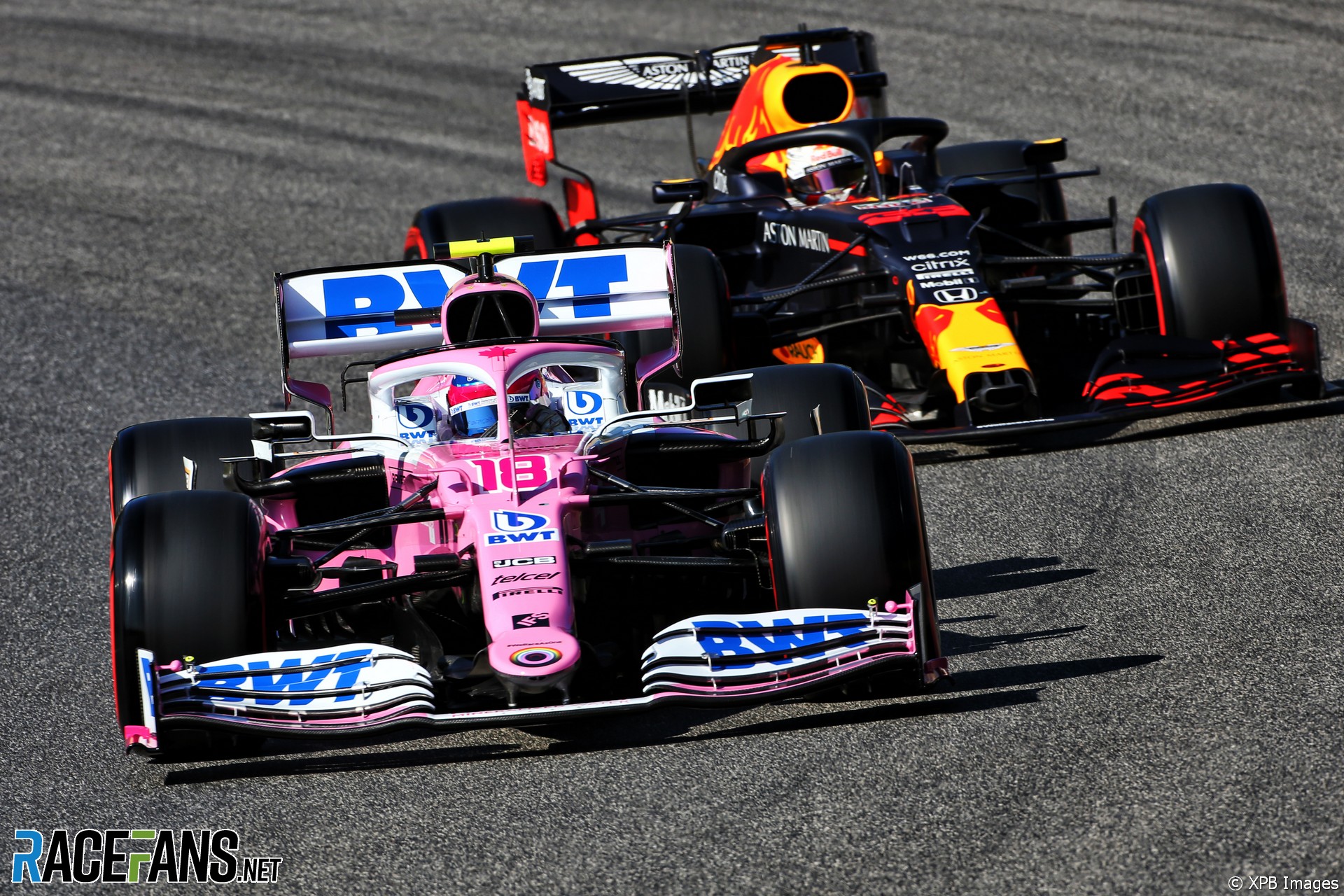 For the first time since the season-opening Austrian Grand Prix two months ago Mercedes and Red Bull have swept the front two rows on the grid for this weekend’s race.

Mercedes claimed the front row, to no one’s real surprise. But Red Bull are closer than ever – Max Verstappen was just three-tenths of a second slower.

Previously we’ve seen Red Bull close the gap to Mercedes on race day. Whether that’s still going to happen in the ‘post-quali-mode-ban’ era is something we should begin to discover tomorrow.

Red Bull may be relieved to have a Ferrari immediately behind them on the grid for once. Leclerc is the third-slowest car in the speed trap, so shouldn’t be too great a threat to them, and puts one more car between them and the Racing Points, which have made very rapid starts so far this year.

All the drivers in the top 10 will start the race on the soft tyres. Pole winner Lewis Hamilton said this was due to concerns over being beaten on the long run to San Donato, the wide, looping right-hander which opens a lap of Mugello.

“I wanted to use the medium tyre but there is a loss at the start,” said Hamilton. “We have a very long run uphill to turn one. Whilst in the first stint a medium tyre would perhaps be better in terms of pace and length, you lose metres just from the compound into turn one so we didn’t want to take that risk.”

On this punishing circuit, the soft tyre is unlikely to get them very far. It wouldn’t be a surprise to see the likes of Lando Norris and Daniil Kvyat on row six, the first drivers who are allowed to start on new tyres, to opt for mediums, if they have them.

Being able to run longer in the first stint on mediums could made the difference between running a one or two-stop strategy. Some drivers suspect those starting on softs will have no choice but to opt for a two-stop strategy.

“This could still be a one stop, but it’s probably the best chance of a two-stop that we’ve had for a long time,” said Kevin Magnussen.

If that’s the case, the teams who could gain the most from it will be those who commit to it early. With tyres likely to drop off quickly, the ‘undercut’ effect should prove powerful, meaning drivers can gain significant a performance advantage by getting onto new tyres before their rivals.

Running a two-stop strategy means the risk of encountering more traffic, which is why teams generally try to avoid it. So how hard will overtaking be in F1 at Mugello?

There was a fair amount of passing in the single, long DRS zone in the Formula 2 and Formula 3 races. Magnussen expects “it’s going to be way harder in F1”, but potentially not as difficult as drivers expected when they arrived at the circuit.

“The DRS zone is really long,” he said, contradicting Antonio Giovinazzi’s observation yesterday, “and given we are on pretty high downforce for this track the DRS gain will be pretty big as well.

“So we’ve got a big DRS gain and a very long zone. So who knows, no one’s no one’s tried it before. So we’ll see tomorrow.”

Mugello’s extensive gravel traps and tight confines may also increase the likelihood of a Safety Car period. One was triggered in today’s Formula 2 race after Giuliano Alesi pulled over by a marshal post but found there wasn’t enough room for them to get his car behind the barrier – much as what happened with Magnussen’s car at Monza last week.

Will this be enough to tempt Red Bull, whose car is fairly quick on the straights this weekend, into attacking the Mercedes by committing early to a two-stop strategy? With Alexander Albon finally backing Verstappen up where he needs to be on the grid, they are at least in position to consider it.

Will we finally see a proper scrap between Mercedes and Red Bull on Sunday? And what can Leclerc do from fifth on the grid in Ferrari’s 1000th world championship race?

Share your views on the Tuscan Grand Prix Ferrari 1000 in the comments.