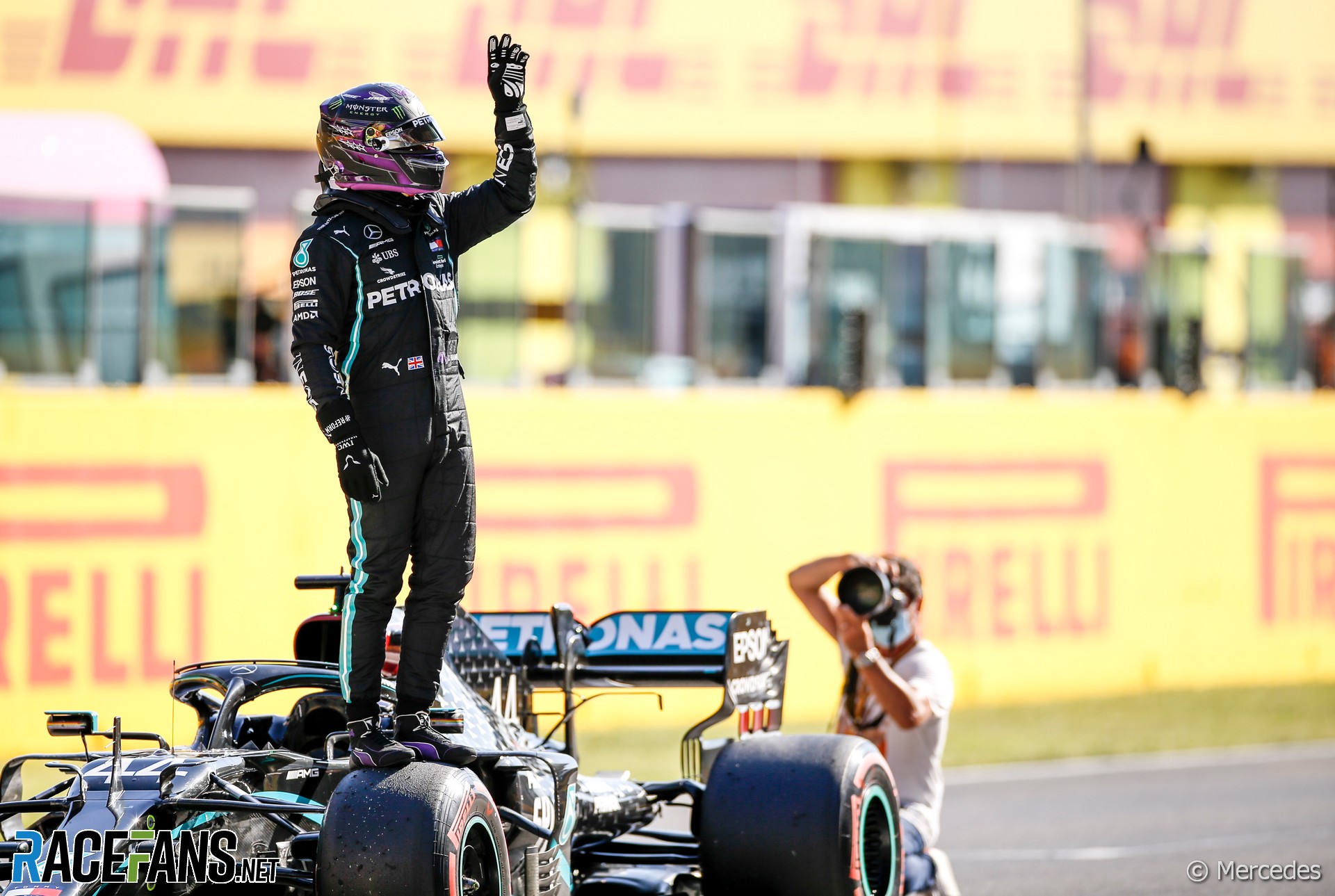 When Michael Schumacher scored his 90th career victory at Monza in 2006, he marked the occasion by announcing his retirement.

Lewis Hamilton did not declare his intention to retire after becoming the second driver in Formula 1 history to reach 90 wins yesterday, and can now equal Schumacher’s all-time record of 91 wins by the end of the month.

While Hamilton remains yet to confirm his plans beyond the end of the 2020 F1 season, he has at least eight more races this year to surpass Schumacher’s record.

So whenever Hamilton chooses to end his career, there’s a strong chance he’ll have won more races than Schumacher by then. He’ll most likely have a better winning rate too as he’s already ahead by 34.7% to 29.7%.

It would take a strange turn of events for him to end his career with a worse one. Hamilton would need to fail to win the next 45 races in a row, then retire (likely at the end of 2022), to leave F1 with a lower winning rate than Schumacher.

Hamilton has won 25 of his last 45 starts, so that doesn’t seem likely. Unless, of course, he does what Schumacher did, and end his career with three win-less seasons (after reversing his original retirement decision).

The record winning rate is not held by Schumacher, however. To beat that, Hamilton would need to go on a serious winning streak.

Lee Wallard only started two world championship races and won one of them. To beat his 50% winning rate, Hamilton would have to win the next 80 races in a row (the current record for which is nine, held by Sebastian Vettel and Alberto Ascari). Even then, it’s doubtful there would be anyone left watching the sport to take notice of his achievement.

If we ignore Wallard on the grounds that his two starts were in the Indianapolis 500 which were not run to F1 rules, Hamilton’s next target is Juan Manuel Fangio’s 47.06% winning rate, achieved with 24 wins from 51 starts. To beat that, Hamilton ‘only’ needs to win the next 61 races.

Hamilton also notched up his 51st fastest lap (26 shy of Schumacher’s record) and 95th pole position. He took his 222nd points finish, which is a record, but as ever with these records it’s skewed by changes to the points system over the years. In most of Hamilton’s starts the top 10 drivers scored points, while previous record-holder Schumacher could only score points for top-six or top-eight finishes in most races he started.

Alexander Albon finally scored the podium finish he’s been threatening to take since Brazil last year. He is the first Thai driver ever to stand on the podium, and the 29th different nationality in the history of Formula 1.

So far this year 15 different drivers have run inside the top three places. They include Nico Hulkenberg, who only started two races, but not Vettel.

Hanoi should have been the 75th different circuit to hold a round of the world championship, but the disruption to the calendar meant that honour fell to Mugello instead. We’ll have another new venue before the end of the year as well – Autodromo do Algarve – so Hanoi will likely be the 77th new circuit.

The ‘Tuscan Grand Prix’ is also the third different race title this year, with three more to come: Eifel, Emilia-Romagna and Sakhir.

The race held the unusual distinction of having three separate standings starts. This has only happened twice before in F1 history. The 1987 Austrian Grand Prix and the 1990 Belgian Grand Prix were also red-flagged and restarted from the grid twice.

Have you spotted any other interesting stats and facts from the Tuscan Grand Prix Ferrari 1000? Share them in the comments.