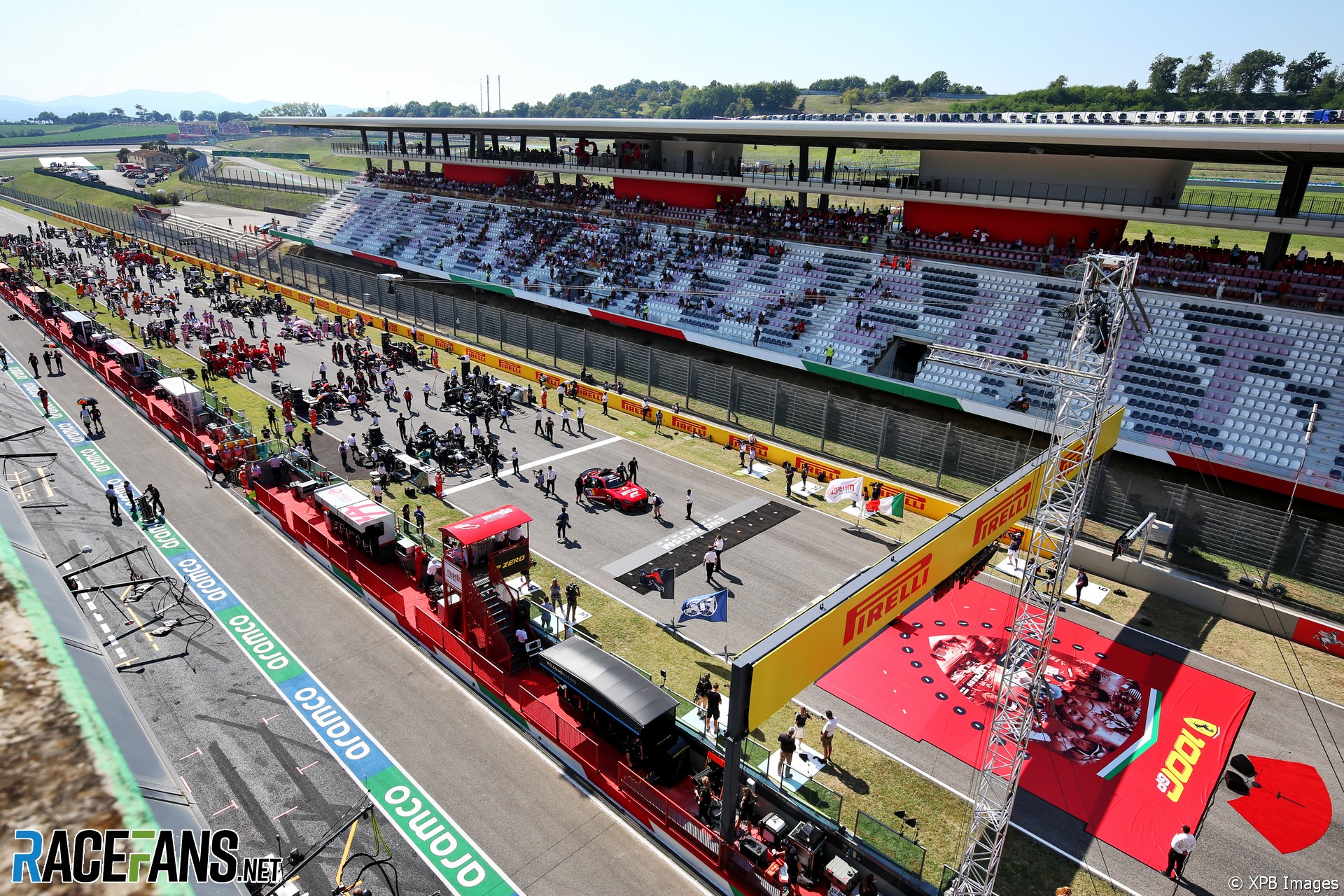 After Monza I alluded to “exciting visits planned” for the four-day gap to Mugello. I was invited to Dallara in Varano de’ Melegari near Parma on Monday before the race, hosted by Giampaulo Dallara himself.

An AlphaTauri factory visit and Franz Tost interview was also planned for Tuesday, before a drive down the SR65 to the scene of Ferrari’s 1,000th grand prix start.

I’d met Mr Dallara before and always found him refreshingly open. When the opportunity of visiting the world’s largest race car manufacturer arose, I jumped at it. Much as I was enthralled by his tales of joining Ferrari at the age of 23, working for Maserati and Lamborghini and de Tomaso plus, of course, with more recent teams such as BMS, Midland, HRT and Haas, it was the Dallara Academy he founded that most impressed me. 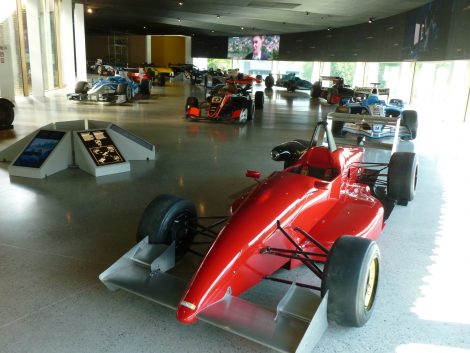 Situated on the ground floor of the museum, the academy provides introduces motorsport technology to school children via miniature simulation rigs such a scaled wind tunnel. A wonderful concept, and absolute proof why this modest man – he lives in his original house beside the factory producing the Stradale road car, down the road from its space age replacement – is rightly considered a legend across motorsport.

As I leave Mr Giampaulo presents me with copy of the latest Dallara book. Although the dedication is far too kind, I am most humbled by the gesture. Thank ever so much for the visit, and all you’ve done for motorsport, Mr Dallara.

Tuesday sees me head for Faenza and F1’s most recent race winners, having (fortuitously) requested a visit three weeks earlier as the route to Mugello took me close to the town situated near Imola. Franz Tost and his team could not have been more obliging – he showed me around personally despite his obviously busy schedule, while the entire workforce was on an absolute high after their Monza victory. 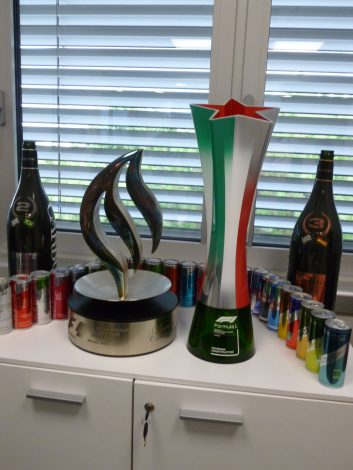 I’d visited twice before in its previous incarnations – in 2005 during its Minardi period, and in 2012 as Toro Rosso. I was amazed by the recent expansion: Where the team was spread over seven disparate sites when I first visited and employed 100 people, there were three (larger) facilities housing 300 heads seven years later.

Apart from renaming, the team has since acquired a furniture factory across the road from its original base, and now straddles both sites, employing 450 staff plus 100 contractors during peak periods. Pierre Gasly’s win on Sunday amply rewarded the expansion, and it was wonderful to see the trophy and his helmet alongside the equivalents alongside of those of Sebastian Vettel, the team’s only other winner (Monza 2008).

No surprise that Red Bull Racing boss Christian Horner now refers to AlphaTauri as “a sister team”, rather than “junior” as in the past.

I head down some of the world’s most beautiful driving roads to Mugello, taking in portions of the (original) Mille Miglia route. En route I marvel at the skills of Stirling Moss and Piero Taruffi, who averaged close to 160km/h for days on end, in all weather, with sparse rest breaks. Breathtaking scenery, endless corners, sunny skies and a freshly-toasted ham panino at the summit – sheer bliss, even in a 180bhp shopping wagon.

I check into an agriturismo – a working farm, in this case olives and honey plus more standard produce, which offers accommodation alongside home-grown fare – which I’d booked as home for the next four days. Set in gently rolling Tuscan hills amongst quaint villages and situated ten kilometres from the circuit, it is perfect for my needs.

The big story of the day is that Racing Point has informed Sergio Perez his services will not be required after the end of the season, paving the way for Sebastian Vettel to join the team for 2021. 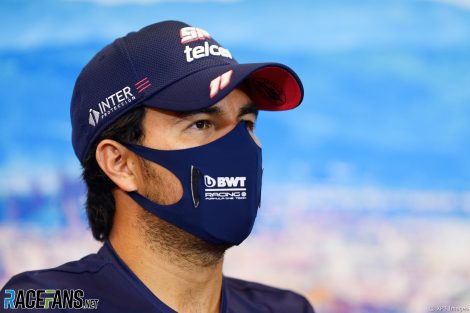 Vettel’s confirmation at Racing Point is announced in the morning. After that I head for circuit and my first Covid-19 test of the weekend, which thankfully is less uncomfortable than my last one at Monza, which I’m hoping was a one-off.

I’d been to Mugello before, in 2012, for F1 testing, and recall its beautiful setting, which rivals that of Austria’s Red Bull Ring. That’s not the only similarity: both are fast, flowing and owned by an F1 entrant, in this case Ferrari.

The usual FIA driver media conferences begin at 2pm, but are spoiled by internet connection problems. When will promoters realise that internet is crucial to our work – particularly with Zoom calls – and anything less than reliable fast speeds is unacceptable. Downloading files over media centre Wi-fi took an hour; the same files via 4G took 15 minutes. A colleague in Hungary needed just five minutes on his office connection.

On Thursday evening I receive a call from a well-placed source, who explains some comments made by Perez. Outlandish as the explanations appear, I follow up and am rewarded with confirmation from other sources, the details of which we run on Saturday morning. I also learn that Racing Point and Haas have settled their dispute over Column 1 prize money worth tens of millions, which is subsequently confirmed by the respective team principals during Friday’s FIA press conference. 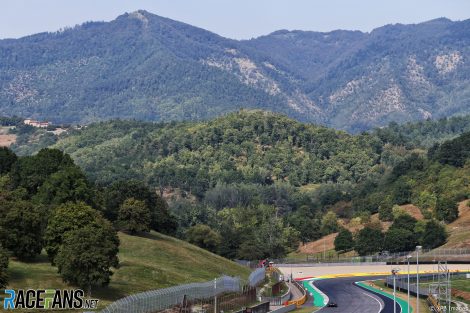 Wonderful to watch F1 cars circulating on this old-school circuit. It’s everything F1 should be. It’s equally obvious why Mugello has not hosted F1 before, yet pulls capacity crowds for Moto GP: F1 would stretch the infrastructure beyond limits, while bikers are happy campers and don’t cause jams. I also wonder whether the gravel traps that demarcate track limits will cause stoppages on race day…

Having heard about a ‘soft landing’ concession offered to teams that need to reduce staff to meet 2021’s $145 million budget cap, I raise the matter during the FIA press conference. It seems Ferrari argued it needs time and headroom to comply with Italian labour laws, and thus a $6m allowance was agreed across the board. However, teams may now delay their restructuring for six months provided they stay within $151m.

Track signage crews are also staying at the agriturismo, who tell me they are expected to work night shifts. As Mugello is a new race venue for F1 there is no history of signage visibility. F1 commits to minimum visibility blocks for sponsors, so the crew expects to add signage once camera angles and speeds of cars are established. I spot their van as I leave the circuit.

Rumours that Mercedes plans to sell its F1 team refuse to die, with 30% shareholder Toto Wolff linked to the buy-out in partnership with Racing Point/Aston Martin boss Lawrence Stroll, the Austrian’s current buddy. Indeed, Eddie Jordan links Jim Ratcliffe, amongst Britain’s richest men and owner of team sponsor Ineos, to the purchase. There is history: Ineos sponsored the Sky TV cycling team before acquiring it outright. 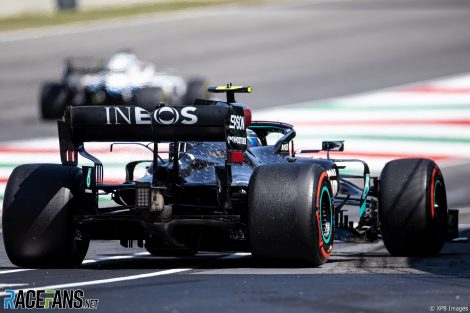 However on Sunday Wolff rubbishes the reports, calling them “made-up”.

During his media session before final practice I question Zak Brown about the impact of the $200m fee demanded from incoming teams, split equally across the existing field. Euphemistically called an ‘entry fee’, it’s basically a franchise fee aimed at boosting the value of existing outfits. All well and good, but the net result is that F1 is unlikely to boost grids beyond the current 10 teams, making it a massively short-sighted move, in my opinion.

After lunch – kudos to the promoter for some excellent catering – FIA president and ex-Ferrari boss Jean Todt hosts a select media session. Apart from expressing his distaste for reverse grids – he abhors gimmicks and prefers single ‘hot laps’ to determine grids as per Formula E – he reveals that FIA consultants expect F1’s Covid restrictions to continue well into 2021. He also regales us with recollections from his Ferrari years. 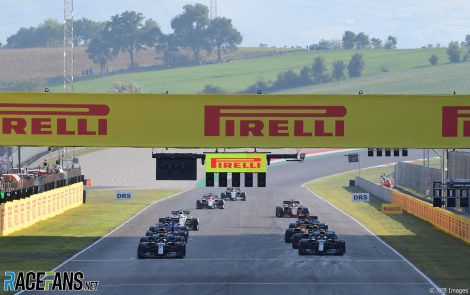 Arrive at circuit at 11am and have final Covid test of this set, then head to media centre, stopping briefly to check out final preparations to the ex-Michael Schumacher Ferrari F2004 ahead of demonstration laps by the seven-time world champion’s son Mick. He bagged his first Formula 2 win of 2020 at Monza, and as we report that morning his final placing in the championship will determine whether he becomes the third Schumacher to race in F1 next year.

After lunch I prepare for the race ahead. Usually grid walks form part of my pre-race ritual, but Covid has scuppered these, so lately it’s been a matter of peering through windows in the media centre. However, Mugello’s catering area has an open air balcony overlooking the start, and while I’m 20 metres away from the action, I appreciate this return to semi-normality.

A (limited) crowd in the stands add to the atmosphere, and I relish that familiar smell of hi-tech oil, petrol, rubber as the cars line up. Never have the hybrids sounded better, either.

The race proves a very lively affair. I leave the media centre at 7:30pm and head for Modena and a planned overnight halt before departing for Belgium on Monday. Unfortunately, as the airline cancelled my flight to Sochi at short notice, this will be the last Paddock Diary until F1 returns to the Nurburgring. I look forward to bringing you more first-hand from there, and our other regular coverage will continue in the meantime.