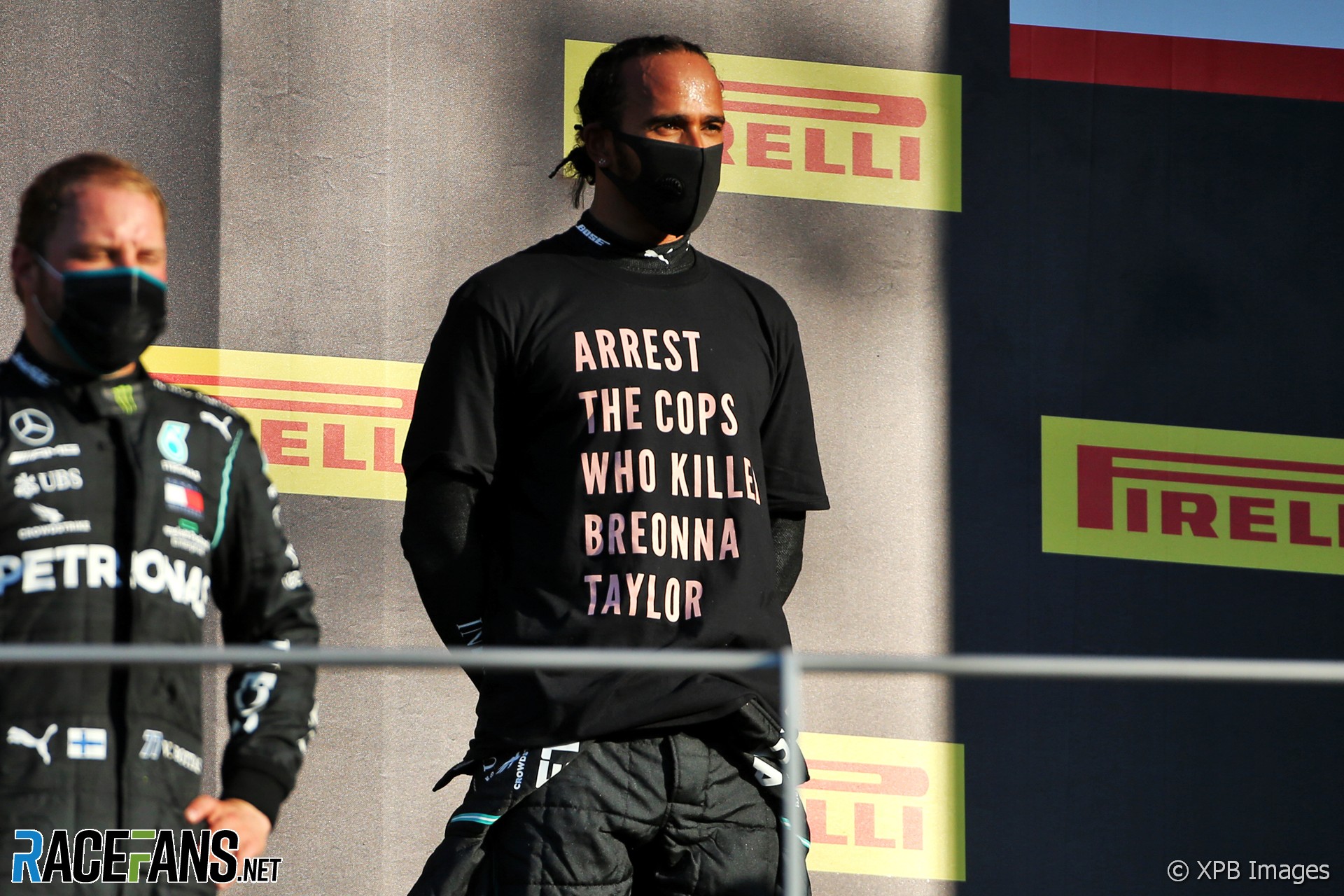 Lewis Hamilton expects new rules will be introduced by the FIA this weekend in response to the T-shirt he wore on the podium at Mugello.

Following his victory in the Tuscan Grand Prix, Hamilton wore a T-shirt bearing the messages “arrest the cops who killed Breonna Taylor” and “say her name”. He also wore the shirt during the pre-race end racism observance and his post-race interview.

The FIA is sensitive to grands prix being used for political gestures. In 2006 the Turkish Grand Prix promoter was fined $5 million – a record at the time – when their podium presentation was deemed to have violated the sport’s political neutrality.

While Hamilton said he has not spoken to the FIA about the T-shirt, or whether its message was considered a political statement, he expects the rules will be changed this weekend to prevent anyone from doing the same.

“I haven’t spoken to them but I heard that tomorrow they’re coming out with a new ruling of some sort saying what we can and cannot do,” said Hamilton in today’s FIA press conference.

He indicated any change will not dissuade him from using his high-profile position to continue raising awareness of racism and supporting the Black Lives Matter movement.

“I don’t know what they’re going to do this weekend. But lots of rules have been written for me over the years, that hasn’t stopped me.

“What I will do is just continue to try to work with Formula 1 and with the FIA to make sure the messaging is right. Could it be better? Of course, it could always be better, but that’s part of the learning curve.”

Taylor was shot eight times and killed by police officers who entered her home in Kentucky in March. The case has been highlighted by worldwide anti-racism protests and the Black Lives Matter movement. Hamilton said the issue at stake is a matter of human rights and not politics, and he was encouraged by the response his gesture received among his supporters.

“What was really positive was the support that I’ve got from the fans,” he said. “I think the fans have been amazing.

“I don’t regret a single moment of it. I usually follow my heart and do what I feel is right. I felt that that was me following my heart I did something that’s never really happened in Formula 1 and obviously they’ll stop it from happening moving forward.

“People do talk about sport not being a place for politics. Ultimately it’s a human rights issue and in my opinion that is something that we should be pushing towards.

“We have a huge group of amazing people that watch our sport from multiple different backgrounds and cultures and we should definitely be pushing positive messages towards them. Especially for equality.”

Hamilton added the FIA’s road safety agenda, which president Jean Todt is a prominent supporter of, is “also, you could say, almost human rights.”

He said he understands the FIA’s desire not to be seen as endorsing political messages. “As a business and as an organisation they’ve obviously got certain limits that they feel they have to work within. They’re obviously trying to make everyone happy which is obviously what they’ve tried to do, and do the right thing.

“So again I think this is a learning process for everyone because people have been happy with the norm here of how life and society has operated. But ultimately the world, and the younger generation particularly, are more conscious that things aren’t equal and change is needed.

“So it does take conversations with people and things like Mugello happening for people to spark the conversation that perhaps would never have taken place if it didn’t happen.”