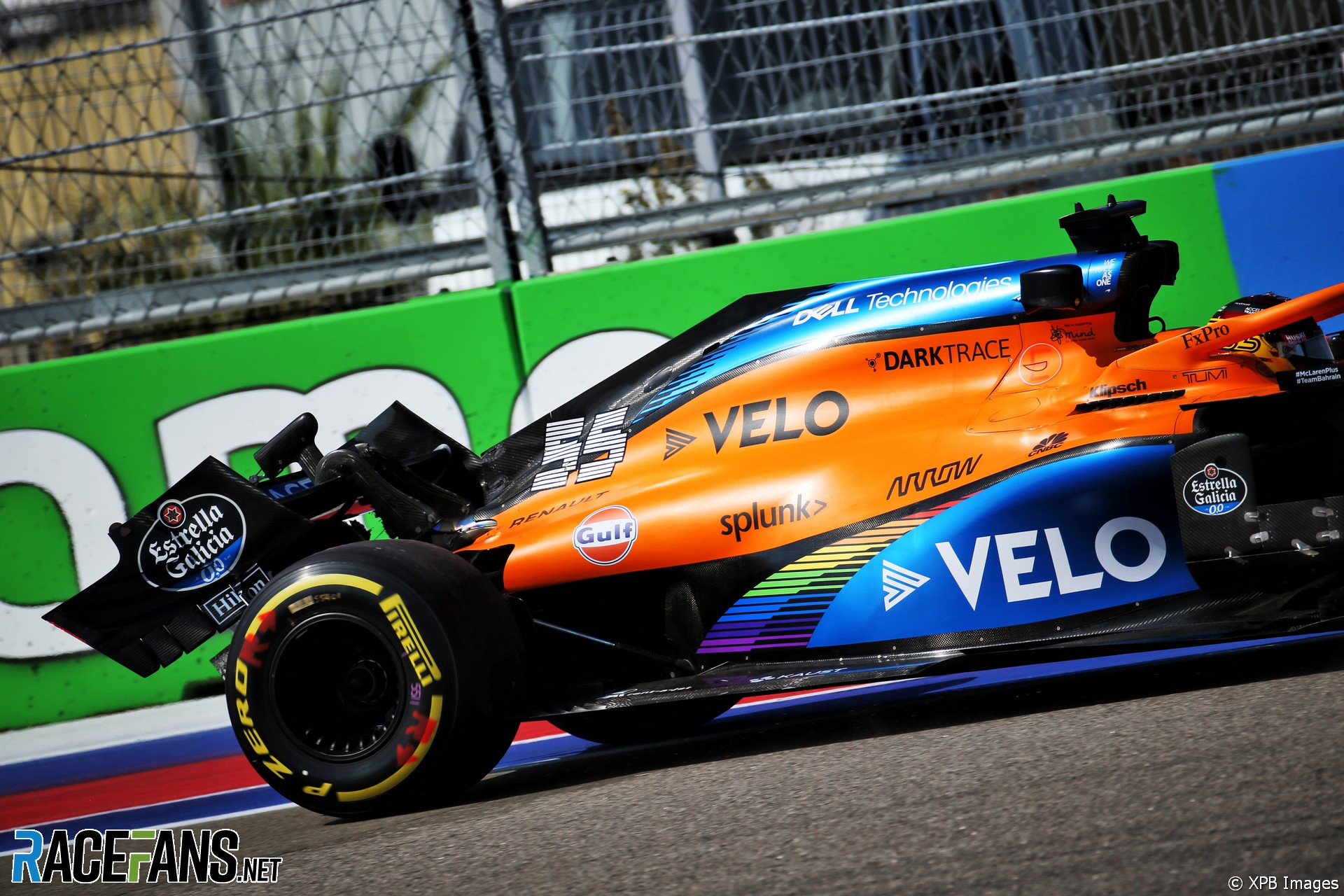 Valtteri Bottas was fastest in the first practice session at Sochi while team mate Lewis Hamilton was unexpectedly last among the 19 drivers who set times.

The first 90 minutes of running at Sochi Autodrom was also disrupted by separate crashes for Carlos Sainz Jnr and Nicholas Latifi.

After very slow starts to practice in Monza and Mugello, cars were straight out on track at Sochi with several teams bringing upgrades – Lance Stroll running new parts on his Racing Point and both McLaren cars trying a new “nosebox” evolved from their Mugello update.

However McLaren’s running was not helped when Sainz crashed into the barriers at turn seven. The MCL35 slid in backwards, breaking both the wing and the car’s rear structure. He was able to return to the pits with the wing hanging off the back of the car, under warning from his engineer to go as slowly as possible. He only managed half an hour of running in the upgraded car, which his team were unable to repair before the end of the session.

Latifi also crashed in almost the same place later in the session. Drivers had been being warned about crosswinds in turns 10 and 13 but both Latifi and Sainz’s crashes seemed to be the rear sliding out from under them in the 90-degree corner at turn seven. Latifi’s crash was heavier than Sainz’s, going into the barrier side-on with the left of his car crumpled into the tyre barriers, bringing out a brief red flag to retrieve the Williams.

Daniil Kvyat looked rapid early briefly topped the times at his home grand prix while running on medium tyres early in the session. But Bottas was able to move ahead on the harder compound, followed by the Renaults, Verstappen and the Racing Point cars.

Hamilton suffered an uncharacteristically low-key session, only setting times on hard tyres and without a huge amount of running after suffering a lock-up what flat-spotted his front-left. He finished the session 19th fastest, almost three seconds back from Bottas’ time. His initial attempt at setting a soft tyre time was also disrupted by the Virtual Safety Car triggered out by Sainz’s crash

Several drivers complained about being held up by their rivals, but no investigations were registered, and Bottas finished the session fastest with a 1’34.923. As the track was still very green at this stage in the weekend, this was over three seconds why of Charles Leclerc’s 2019 pole time of 1’31.628.