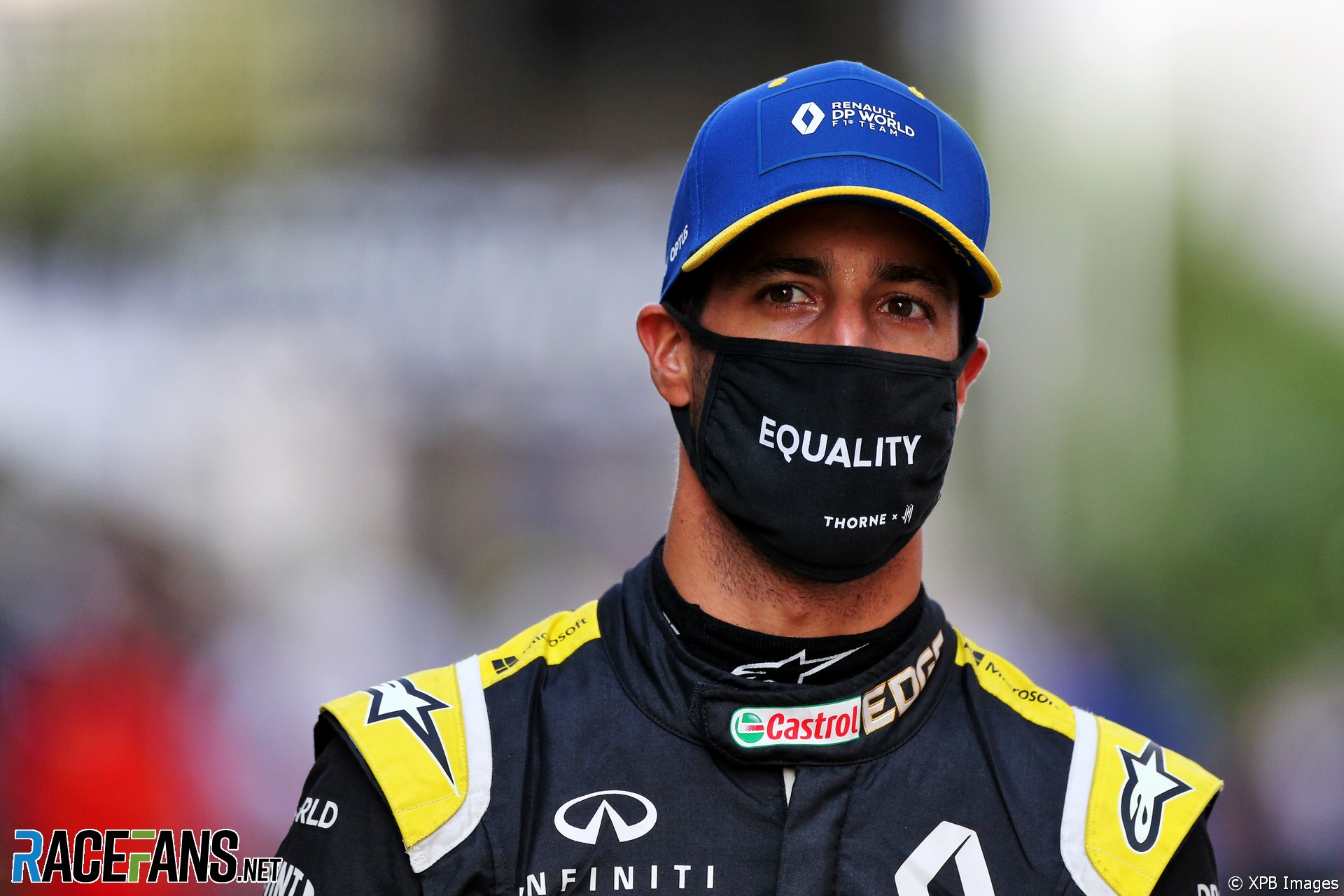 In the round-up: Daniel Ricciardo talks about the importance of being willing to face some criticism in speaking out against racism.

The Renault driver, who has swapped the leopard print mask he sported at Mugello for one printed with the word ‘equality’, said silence on issue of racism is a big part of the problem:

This weekend, the equality mask – I don’t think that’s too offensive or strong, I’d like to think it’s fairly well-received on all platforms.

So to start talking about things you’ve never spoken about before, whether it’s on racism, whether it’s on mental health or any of these subjects, it is a little bit daunting and you have to be prepared to open yourself up for a little bit of criticism – or maybe not 100% positive feedback.

But I think if it’s something that you feel strongly about and you believe in then I don’t see why not. I think that, especially with the racism stuff, a big problem is – as I guess you guys have seen now and understood – it’s the silence and it’s the people who are too comfortable in their shell, in not speaking up and I think that’s the thing, just encouraging you if you do have a voice and a positive one then let it be heard.

Can we just take a moment to appreciate this incredible addition to @WilliamsRacing? pic.twitter.com/kUCNr9tZzE

The return of Detective Davidson 👀🕵️‍♂️@antdavidson spotted @alex_albon looking at some lap data during qualifying.

6/10 times in Q2 this season. We're not there by accident. Mega job guys, lap was gooood 💪 pic.twitter.com/ZayZSSUC1o

This weekend we will pay tribute to Clive Byfield on our cars. Clive, who was part of the McLaren family for more than 40 years, sadly passed away recently and we will carry his name on our cars in his memory. 🧡https://t.co/vgh4PfxMIj pic.twitter.com/wu7AZNH2q2

⚠️ UPDATE: The race is suspended until further notice. There will be no further updates until 7am CEST and no re-start before 8am CEST. #24hNBR

"Given the grid positions of the Honda-powered cars and our race pace during free practice, we should expect all of them to be in the points. With Max starting on the medium tyre and the pole man starting on the softs, we could see a very interesting battle at the front."

"'He is for me the greatest driver that our generation has seen. I’m confident that he will break the record of Michael Schumacher, who was also a fabulous driver,' Williams told reporters on Saturday."

Virtuosi, Carlin, DAMS and ART Grand Prix lodged notice of their intention to appeal the 'leniency' of the sanction awarded by the stewards to René Rosin, the team principal of Prema. The team were fined for the team principal having verbally and gesturally contacted his mechanics during the race to indicate a change of order to driver pit stops.

'I'm very proud of them' says Schumacher on Prema (source)

"'It's definitely among the top drives,' beamed a smiley Mick Schumacher in the wake of his second victory in Formula 2 - a win that strengthened his grip on the drivers championship."

"Scott McLaughlin’s victory in the opening race of the SuperSprint has secured Ford the Supercars champion manufacturer award for the second straight year."

"The 38.15km Çetibeli had been marked down as the rockiest and toughest special stage of the weekend. One that everyone should be fearful about. In a minute-by-minute timeline, we chart the drama that unfolded and the effect each incident had on the rally and the fight for the drivers’ and manufacturers’ titles in the FIA World Rally Championship."

"'In a position where you’re visible publicly and doing things to get exposure, if you can promote a positive message, then that’s a great opportunity to do so,' Martin says in tandem with her activism. It’s the same with any other driver—she hopes that if more big names in the sport genuinely speak out in support of the LGBTQ+ community, then we can start seeing a big change in the atmosphere surrounding the motorsport world."

HAL muses on the combination of business, sentimentality, results, prestige, and family ties which have come together to cost Sergio Perez his drive at Racing Point:

He did a great job and did not deserve to loose his seat and he is out right at the moment where the team is getting places and set for great results.

It must be more painful even if Perez’s ego is often reported as pretty big. But honestly, the team’s decision make sense. They are not ditching Perez because they want to replace him. They’ve jumped on a sudden opportunity to hire a four-time world champion and therefore have to release a driver.

Sure, Perez is arguably performing better than Stroll. But we know the story and Stroll is doing quite decently this year, so it’s not as if this was a wasted seat. He is still very very young (In fact he probably came too early in F1), so him and Vettel make a good duo I suppose. Seems Lawrence Stroll is a smart guy who knows how to build a project.
HAL