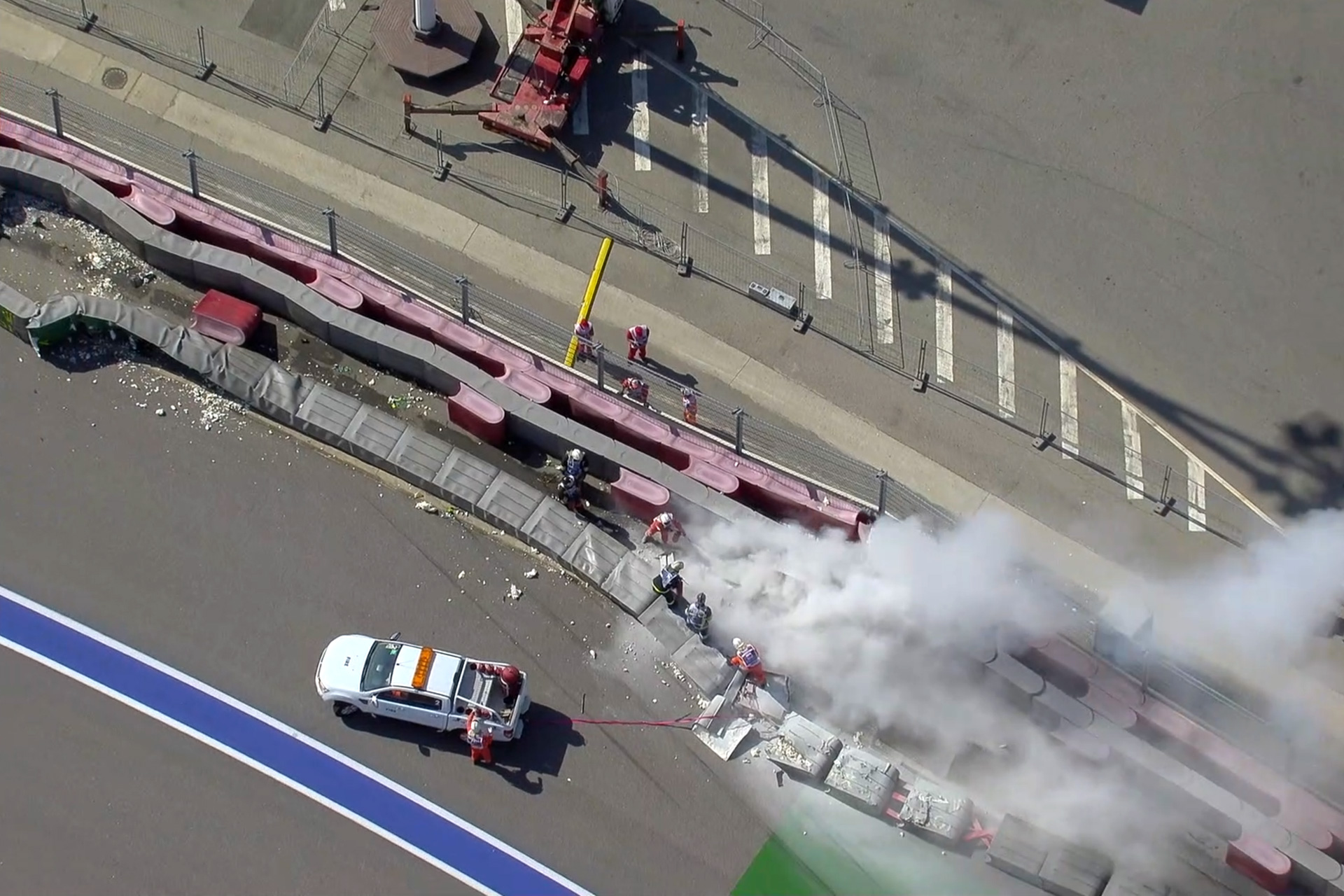 Formula 1 drivers praised the performance of the TecPro barrier in the huge crash which brought Sunday’s Formula 2 race to an early end.

The F2 sprint race was red-flagged after Jack Aitken and Luca Ghiotto tangled in turn three. The pair crashed heavily into the TecPro barrier on the outside of the corner, but both were able to climb out of their cars unaided.

The crash caused extensive damage to the barrier, and the race could not be restarted before the afternoon’s grand prix began. Nonetheless Daniel Ricciardo was among those who were impressed by how the barrier performed.

“The crash was obviously very big,” said the Renault driver. “TecPro I think was really good for that. I was quite amazed that they got out so easily, which was obviously what I wanted to see.

“I would definitely say the TecPro is very important on some of these high-speed corners. It does absorb a lot and and lets the car kind of slow down gradually by the look of it.”

Ghiotto’s car caught fire after he climbed out of it, and it took several minutes for the marshals to bring the fire under control.

“I don’t want to be critical in such an accident, but the marshals, I think they were quite slow to put the fire,” said Ricciardo. “Obviously Ghiotto had got out of the car but I would like to think that they would have acted quicker if he was struggling to get out.”

George Russell, who was involved in a heavy crash with Antonio Giovinazzi at Spa, was also impressed by the performance of the barrier.

“Obviously it was really positive to see those guys get out of the cars so quickly,” he said. “It was such a huge impact, it was a scary speed and I guess it shows what a great job the FIA have been doing and F2 to create such a strong car.

“The TecPro was also really interesting. It obviously took the speed out of it really well. What was really quite nice, you didn’t have like a rebound effect, which is often what have with tyres like you saw with Giovinazzi’s incident at Spa. Hit a tyre barrier and you rebound back into the line of [fire] of others.”

However Russell also expressed concern over the potential implications of the fire. “The only negative is that the TecPro went over top of the car, that car ended up on fire and he was very fortunate to be able to get out of it.

“Had that TecPro been over the top of his helmet it may have been a different story. But all in all, to see a crash at that speed is shocking and the way everyone walked away from it was refreshing for drivers.”

FIA Formula 1 race director Michael Masi visited the scene of the crash while marshals were repairing the barriers. He said the FIA would scrutinise the incident closely to see what lessons could be learned, but he was satisfied with the speed with which the fire was extinguished.

“The challenge was that it was quite a distance between two marshal posts is where the incident occurred,” he said. “So the firemen from the marshal posts that were both on the side of the incident – I wouldn’t want to be running with a fire extinguisher for the best part of 150-odd metres or whatever.

“As soon as the race was suspended and all of the competition cars had gone past, we also saw marshals from the opposite side of the track cross. So I think that in the circumstances, yes, seeing a fire is never good, the positive part was that both drivers got out unscathed, which is the most important element of all.”

The race, the second of three events in all categories at Sochi Autodrom last weekend, was cut short after seven laps and not restarted. Half points were awarded to the competitors.

Masi said it was “unfortunate” the race was curtailed, “but, at the end of the day, we have a timetable to adhere to, for starters. And secondly, the degree of that incident and the repair that needed to take place, I think in the end it took in the vicinity of 90 minutes to do that repair.

“So I think what happened, yes, it was unfortunate that the FIA Formula 2 championship didn’t get to complete its race but it does happen occasionally.”