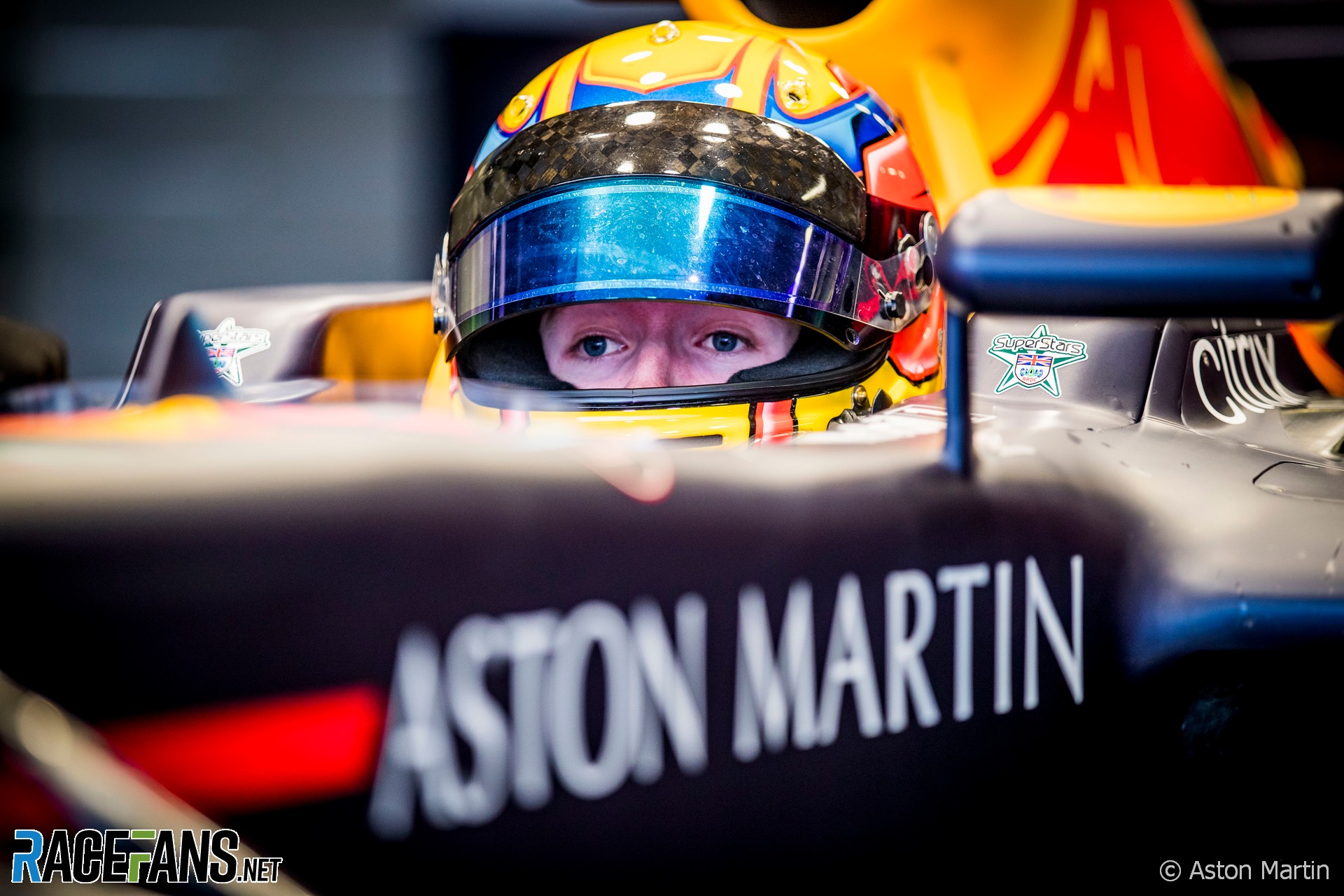 In the round-up: BRDC Young Driver award winner Johnathan Hoggard has completed a day of testing in a 2012 Red Bull Formula 1 car, as part of his prize.

Hoggard, 19, competed in British F3 last season, finishing second to Clement Novalak. He said he had a “massive smile” on his face while driving the Red Bull car. “I tried to block out a lot of the emotion and I focused on the apexes and the braking zones,” said Hoggard. “In some ways it actually felt a lot like a normal test day in F3, but you are going a lot faster and you have a massive smile on your face while you are doing it.

“When you start karting, F1 is your dream, but you never know whether you’ll get the chance to drive one of these cars.”

Mixed conditions meant Hoggard drove 21 laps during the afternoon, after the track had dried.

We are delighted to confirm that Sean Gelael will return for the final two rounds of the 2020 @FIA_F2 season in Bahrain, having fully recovered from the injury he sustained in Barcelona.#F2 #AllezLesBleus pic.twitter.com/iXFPgtc3w7

Oliver Askew will race in the No. 7 Arrow McLaren SP Chevrolet at the Firestone Grand Prix of St. Petersburg, having been declared fit to compete by the INDYCAR Medical Team. #INDYCAR #FirestoneGP pic.twitter.com/2i0usy7Z3r

The first Russian driver to race in Formula 1, @VitalyPetrov, will make his debut as a steward at this weekend's #PortugueseGP.https://t.co/W6R5dpDML3 #F1

A post shared by FIA Women In Motorsport (@fiawim)

Ferrari will ensure Giovinazzi and Mick Schumacher have F1 seats next year at Alfa Romeo and Haas, though it remains to be seen who will drive for which team.

"Rounds one and two of season seven will take place in Santiago on January 16 and 17. Our first double header in the Chilean capital, the back-to-back races in this iconic city centre will mark the start of Formula E’s inaugural season as an FIA world championship. For health and safety purposes, and working closely with the authorities in Santiago, the event will be held behind closed doors."

"NSW Health is tonight calling on anyone who attended the Bathurst 1000 motor race on the weekend as well as residents of Bathurst with any symptoms that could signal Covid-19 to get tested as soon as possible after remnants of the COVID-19 virus were detected in raw sewage in the area today."

FDA 2020 scouting world finals: the best youngsters from around the world come to Maranello (Ferrari)

"Three are from Europe: Charlie Wurz from Monaco, the Russian Nikita Bedrin and Sweden’s Viktor Gustavsson. The first two of these already came to Maranello a few days ago, as part of a camp organised with ACI Sport and Tony Kart. From the Latin American region, there’s Mexico’s Santiago Ramos Reynoso, with from Oceania, the Australians Marcos Flack and James Wharton."

"Last year they made a really big step forward and caught a few people by surprise. There were some management changes; Andreas Seidl joined (from Porsche), who has been fundamental in teams getting back to the front in the past. They’re in a good phase right now and there’s a lot to be excited about. I think I can have a really positive impact when I get there."

"'Our initial estimates, which I consider realistic, pointed towards an economic impact of around €30 million. In light of the current situation, the number will be lower, but we will only know at the end of the event,' the local mayor told us."

Socksolid says F1’s downforce reduction measures are only dramatic because current cars have so much:

After all, it is all about adding as much downforce as possible until the drag starts cancelling any potential lap time benefit. Or maxing out the downforce more often than not. The lower the downforce level maximum, the more it is used.

If I remember correctly in 2016 the teams used maximum downforce setup everywhere. Which in theory I think is a great thing as it allows smaller teams to focus on single aero package that can be used everywhere with little changes.

Sadly the financial practicalities limit a lot what can be done. What is scary is that they are still talking about 2021 season aero rules. Cutting it pretty close…
@Socksolid