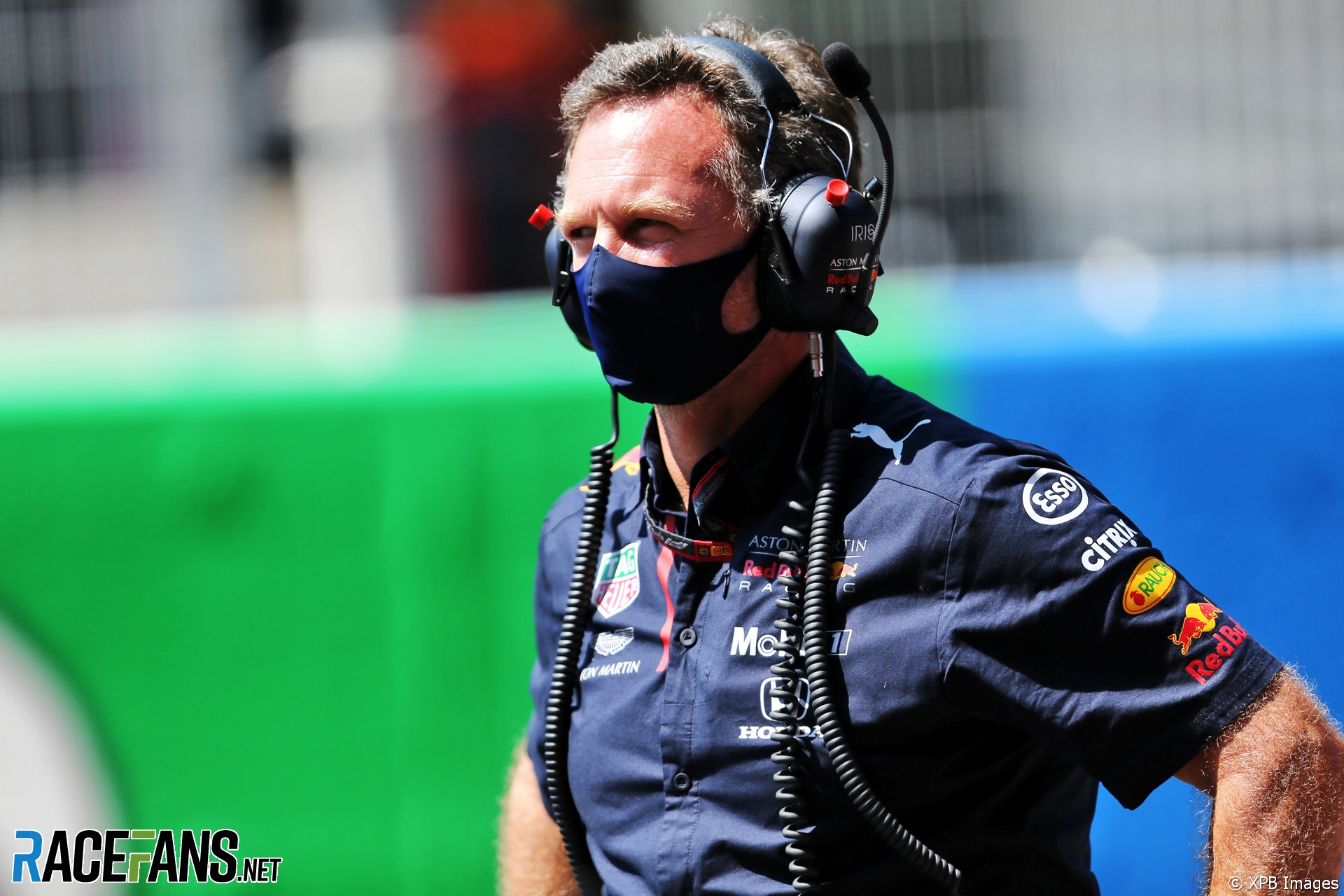 Red Bull team principal Christian Horner says “the only option that works” for the team is to take over Honda’s engine supply after the manufacturer’s planned departure at the end of the 2021 F1 season.

Honda’s intended exit leaves Red Bull and sister team AlphaTauri seeking a new engine supplier for 2022 and beyond. Horner says their preferred option is to continue using Honda’s engines, but that can only happen if F1 freezes engine development after next season.

“Obviously we’ve got a little bit of time,” he told Sky. “We’ve got just under 18 months to get ourselves sorted.

“But the more we look, there really only is one option that works and that would be to agree something with Honda where we could take on the [intellectual property] for the Honda engine.

“But of course that would have to be dependent on the regulations. It would only make sense for an independent engine supplier, as Red Bull would effectively be, if there was a freeze because it would just be impossible to fund the kind of development spend that goes on with these engines.”

“All that details needs to be fixed with Honda’s senior management,” he added. “But it’s so dependent on what the regulations are going to be. It’s absolutely fundamental that there has to be an engine freeze with these power units until the introduction of the new engines.”

F1 should introduce a freeze to prevent the sport being left with just three engine suppliers, said Horner.

“It’s a big wake-up call for Formula 1 to have a major engine manufacturer like Honda walk away from the sport at the end of ’21. That leaves only three engine suppliers. That’s a very precarious place for the sport to be. So that’s why the governing body really needs to take control of this.”

“The FIA, the commercial rights holder, they need to step up and do their bit,” he added. “I think that for Formula 1 to lose an engine manufacturer is not a good thing. It would be criminal to see those engines just on a shelf somewhere in a Japanese warehouse.”

Mercedes, who will have four engine customers next year, have already ruled out supplying further power units to either Red Bull-owned team. That leaves Red Bull with two options among the current suppliers – Ferrari and Renault – but Horner said “all focus is on plan A”, which is to continue using Honda power.

“Toto’s made Mercedes’ case very clear,” he said. “Obviously Ferrari have got their own issues that they’re dealing with.

Under F1’s rules, if Red Bull or AlphaTauri do not have a power unit supply for 2022 agreed by June 1st next year then whichever manufacturer is supplying the fewest teams – currently Renault – would be required to supply them.

During the Eifel Grand Prix Renault managing director Cyril Abiteboul said he had not yet been approached by Red Bull.

“I don’t think it’s a question of whether we are open or not open,” he said. “We know the regulation. When you are a participant to the sport you have to accept the rules. It’s part of the sporting regulation. So, we know what that is.

“We also know the details, including in terms of timing and as anyone can check in the sporting regulations, there is still quite a bit of time before we get there.

“I can’t imagine that they don’t have a ‘Plan A’ or ‘Plan B’ and I think we are very far in the pecking order of the alphabet before they call us again.”