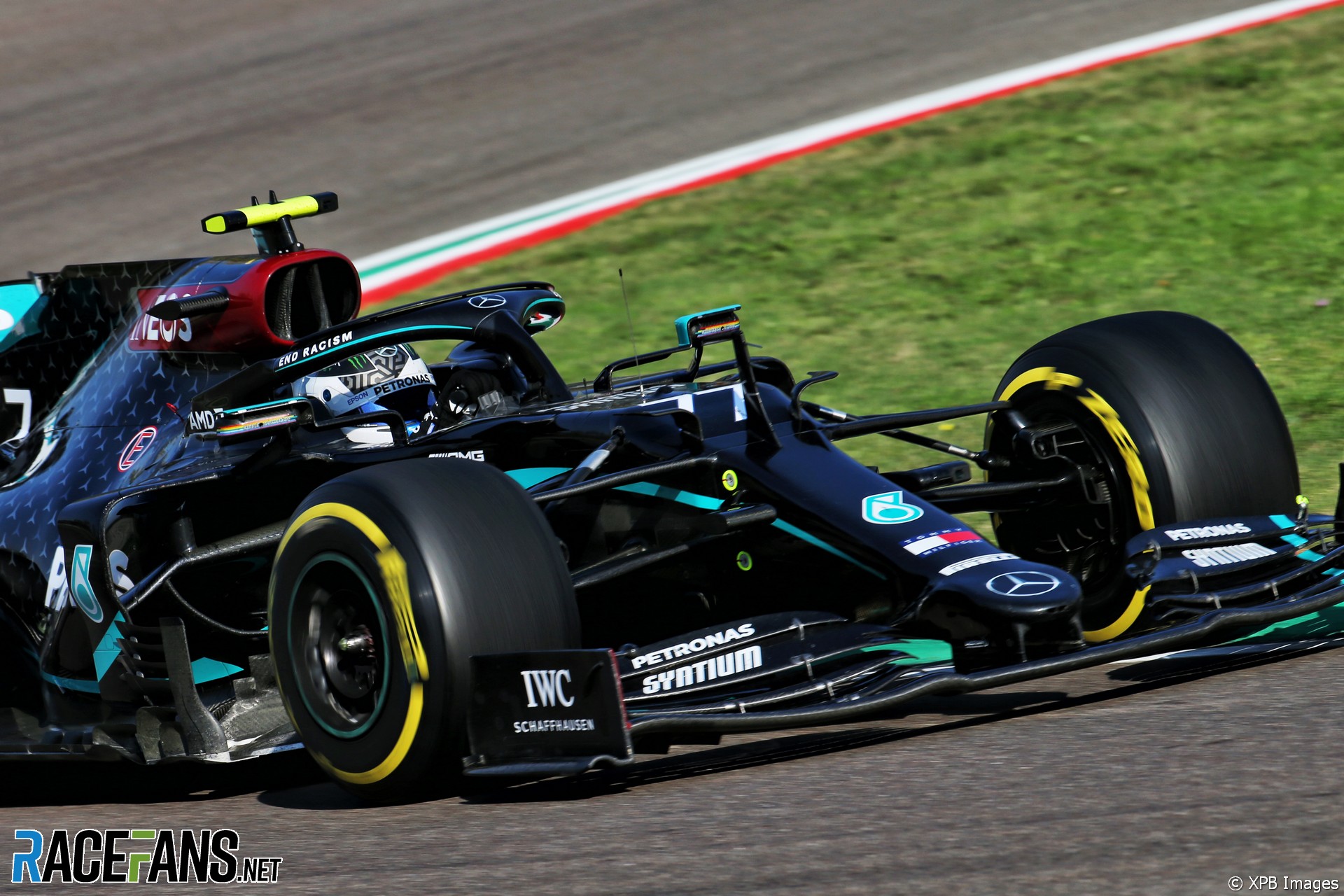 Valtteri Bottas took pole position away from Lewis Hamilton with his final lap of qualifying for the Emilia-Romagna Grand Prix.

The Mercedes pair swept the front row as usual, while Max Verstappen bounced back from an engine problem to take third on the grid. Pierre Gasly claimed an impressive fourth for AlphaTauri.

The subject of track limits arose several times in practice and remained a problem as qualifying began. Valtteri Bottas and Alexander Albon had their best lap times deleted halfway through the session. That left them in the drop zone with five minutes remaining, along with Nicholas Latifi, Kevin Magnussen and Kimi Raikkonen.

Albon tidied up his lap on his return to the track, and closed within four tenths of a second of his team mate, to secure his progress to Q2. Bottas also escaped the bottom five and originally jumped up to second place. That became first when his team mate’s best time – unusually, set on an extra run at the end of Q1 – was also deleted for track limits, though Hamilton was already safe in Q2.

With Daniel Ricciardo also improved his time after making a late start to his qualifying session. That left the fight to escape the bottom five between the usual suspects.

Kevin Magnussen made another of his increasingly familiar excursions into a gravel trap at the end of Q1, as he over-committed in the second Rivazza at the end of his final lap. He failed to make the cut, as did his team mate and the two other Ferrari customers. Kimi Raikkonen was vexed at losing his best time due to track limits, while George Russell once again grabbed a place in the final 15.

Red Bull’s challenge to Mercedes faltered in the second phase of qualifying. Verstappen complained of a loss of power from his Honda engine and headed for the pits, where his team diagnosed a misfire and changed a spark plug in a bid to solve the problem. Albon, meanwhile, spun on his set of medium tyres at the Variante Alta, meaning he had to switch to softs for his final run.

From that unpromising start, the team bounced back impressively. Verstappen rejoined the track for a final run and made the gutsy choice of running on mediums again. His gamble was rewarded as he bagged a place in the top 10. Albon didn’t fancy the mediums, but also salvaged his afternoon by reaching Q3 on softs.

The Mercedes drivers led the session as they pleased on the medium tyres, followed by Pierre Gasly, who reprised his impressive form from first practice. Daniil Kvyat made it a full set of Honda-powered cars in Q3.

The McLaren pair scraped through in the bottom spots in the top 10. Remarkably, this came at the expense of both Racing Point drivers. Lance Stroll could only manage 15th after a scruffy lap which included a track limits infringement and a trip through the gravel at Rivazza, not far in front of Verstappen.

Russell out-qualified Sebastian Vettel for the second race in a row after the Ferrari driver also lost a time due to track limits. As in Portugal, Daniel Ricciardo was the only Renault driver to reach Q3, though this time he didn’t spin off.

Neither Mercedes driver managed a completely clean first lap in Q3, but they were easily quick enough to lead the initial running. Bottas was quickest through the first two sectors, but ran wide in the third, which left Hamilton quickest, despite his bumpy run along the exit kerb at Variante Alta. Just three-hundredths of a second separated them.

Behind Verstappen in his familiar third place, Albon was initially pipped to fourth by Gasly. Then he lost another lap time due to track limits, and the second Red Bull slipped to 10th place. That promoted Leclerc, Norris and the rest.

Bottas knew a tidy final sector could be enough to turn the tables on Hamilton, and he found it. The pair were closely matched through the first two sectors again, but a clean run through the final part of the lap made the difference. Hamilton therefore had to settle for second, with Verstappen the inevitable third.

Gasly was thrilled to bag fourth on the grid, equalling the best qualifying position of his career. Albon managed a clean final lap but could only take sixth, Ricciardo beating him to fifth by five-hundredths of a second.

The McLaren pair fell to ninth and 10th with their final runs behind Leclerc’s Ferrari and Kvyat in the second AlphaTauri.