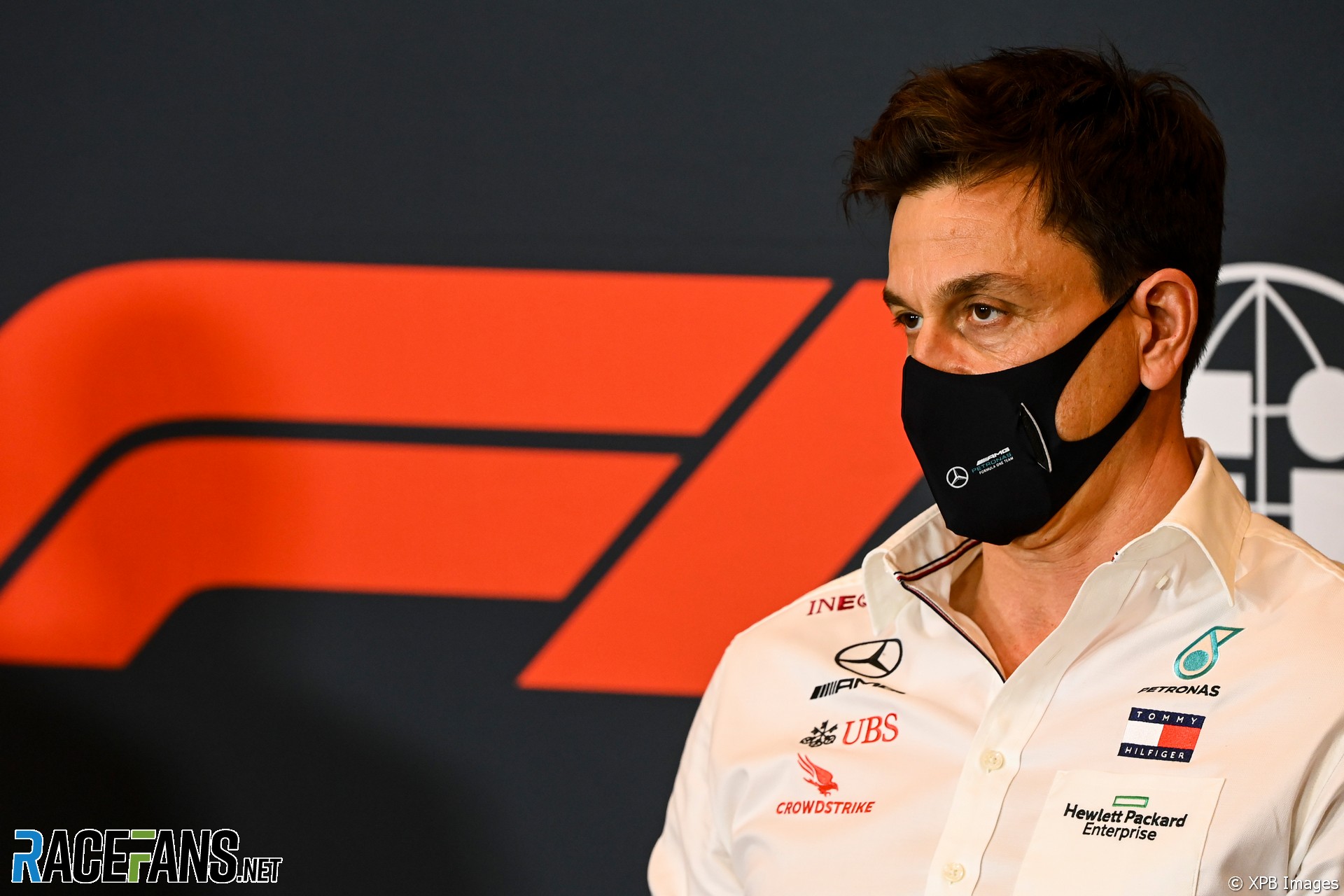 With a record 23 races on the 2021 F1 calendar, a two-day race weekend could reduce strain on teams but Wolff says it isn’t suitable everywhere:

I like it very much. It’s so compact, lots of adaptability needed. You just have to get the car in a good position straight from the get go and there’s not a long time to analyse data and run the simulator overnight. And in that respect is something new and I like it.

I don’t think it works for every track. There will be big races, hopefully, with a lot of spectators again, where a three day event makes a lot of sense.

I’m thinking about Melbourne and the amount of people there and the narrative, the content that we can provide around these tracks. So I don’t think it’s fit for everybody, but I think for here, it works really well.

Red Bull and AlphaTauri held a show run in Istanbul ahead of this weekend’s Turkish Grand Prix.

Ralf Schumacher says Hamilton should confine his political views to social media only and not when he is representing Mercedes at race weekends.

C4F1 credits Ben Edwards, as he announced he is leaving Formula 1 (Whisper TV)

"Formula 1 commentator Ben Edwards announces today that he will be stepping down from his C4F1 lead commentary position at the end of the 2020 season."

"The final phase of the FIA Girls on Track - Rising Stars program, scheduled for Maranello this week, has been postponed following the positive Covid-19 of one of the four finalist girls. The young woman, who was already in self-isolation awaiting the result of the swab, has not had contact with other people involved in the program, apart from the adult who accompanied her, and remains in quarantine."

"Unfortunately, only Martin will be able to compete alongside the Danes for the world title after Lynn received a positive test for Covid-19 last weekend and has therefore not travelled to Bahrain. His place in the line-up has been taken by Richard Westbrook (GB), who was already expected to race with the team in the #98 Aston Martin Racing Vantage GTE Am entry."

"We take great pride in joining the '500 Club', a very exclusive group of teams comprising some of the most historical names in the sport – only Ferrari, McLaren and Williams have passed the 500 Formula One events’ mark. Cars produced in our Hinwil headquarters have graced the Formula One grid for nearly half the 1,032 races that will have taken place with Turkey."

"I’m seeing the effect at home too where more young girls are starting to come through and I’m proud to be coaching two of them. I work with Ella Stevens, 14, in karting and 17-year-old Abbi Pulling who has been doing a great job in British F4."

There were some new sights to see in Istanbul and on the Bosphorus Bridge today 👀🤩@PierreGASLY and @AlphaTauriF1 @alex_albon and @redbullracing #TurkishGP 🇹🇷 #F1 pic.twitter.com/LM8d1kKOw0

Take a look back at the best bits of the @VirtuosiRacing star’s antics over team radio in 2020! 📻😅#F2 #RoadToF1 pic.twitter.com/nnbbxm7QWo

What a shame to hear @benedwardstv has decided he will stop commentating on @F1 at the end of the season. I sincerely hope we'll be able to enjoy his natural, enthusiastic style and vast knowledge of racing applied to another motorsport.

Nikos asks if drivers are struggling to notice trackside signalling, after several incidents this season including a near-miss with marshals at Imola:

In Monza most of the drivers did not notice that the pit lane was closed and they only stayed out because they were notified by the pit wall.

Now we get this.

The drivers seem to find it increasingly difficult to notice what is going around the track (flag or no flag Stroll should have noticed the marshals and backed off) .

I think that they rely too much on the information they get from the pit wall. This is becoming a safety concern and should be addressed before anything bad happens.
Nikos