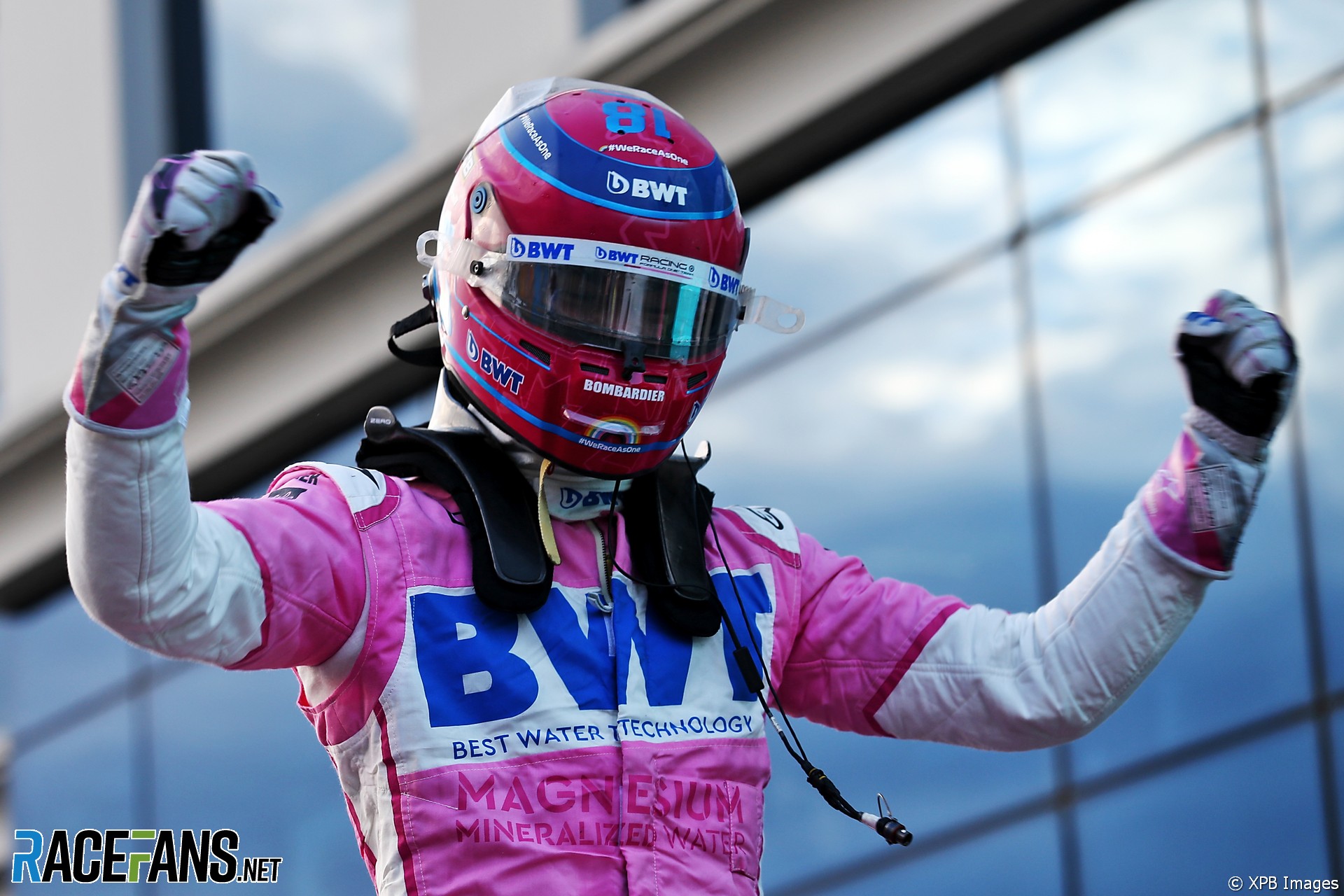 Lance Stroll took a shock pole position in a qualifying session which was disrupted by rain at Istanbul.

The first stage of qualifying was red-flagged twice, including a lengthy break due to heavy rain at the Istanbul Park circuit.

Stroll switched to intermediate tyres for his final run in Q3 and beat Max Verstappen by less than three-tenths of a second to claim an unexpected pole position.

Following the rain-affected final practice session, little rain fell in the two-hour gap before qualifying. But the first drops were already falling as the session began, and knowing how gripless the track had been earlier, most drivers opted for full wet weather tyres.

There were a few exceptions, including the McLaren and Red Bull drivers. Max Verstappen ran wide and then spun at turns nine and 10, and resumed behind Carlos Sainz Jnr. To his surprise, much as had been the case at the start in Portugal, he noticed the McLaren had better grip in the adverse conditions.

Alexander Albon in the other Red Bull did one lap on the intermediates, then swapped them for wets, and set the eighth-fastest time. Verstappen persevered with the intermediates and it almost cost him – he fell to 15th, one place above the drop zone, seven-thousandths of a second ahead of Charles Leclerc.

The rain fell harder and harder as the session wore on, until poor visibility and increasing levels of standing water forced a halt to proceedings. “It’s chucking down in five and six,” reported Sebastian Vettel on his radio. “They should red flag it really because it’s undriveable. It’s more than aquaplaning.” Carlos Sainz Jnr was among others warning about the conditions, and race control soon decided to halt proceedings.

When the session was stopped with just under seven minutes remaining, Esteban Ocon headed the times in his Renault, followed by Valtteri Bottas and Lance Stroll. Leclerc headed the drop zone, followed by Romain Grosjean, Pierre Gasly and the Williams pair. Nicholas Latifi was a massive 15 seconds off the pace after spinning at turn eight in front of Bottas.

The session was suspended for nearly three-quarters of an hour, finally resuming shortly before 1pm local time. It didn’t stay green for long. First Kimi Raikkonen spun his Alfa Romeo a few corners after leaving the pits, but gathered his car up again. Then Grosjean understeered off at turn one and beached his Haas in a gravel trap, triggering a second interruption to Q1.

“I don’t know why we picked up so much front locking suddenly,” he told his team on the radio. “The rears were better but obviously the front not.”

“I’m sorry boys, you deserved better,” added Grosjean, who has only three races left at Haas, and possible in F1. “I just drove shit.”

No one had been able to improve their times during the brief window opportunity between red flags, and the final restart left just three minutes for anyone to set a better time. But when Verstappen jumped to the top of the timing screens with his first run, almost nine seconds quicker than Ocon, it became immediately clear the track was now much quicker.

However halfway around the lap Latifi spun off again, this time at turn eight, where he came to a stop. Yellow flags were waved at the scene, and several drivers passed them, as they set their lap times. Race control announced their driving would be investigated after the session had concluded.

Among those who lost out were Kevin Magnussen, who backed off and fell into the drop zone along with his team mate. Latifi’s spin ended his session and his team mate George Russell also went no further.

The second stage of qualifying brought some respite from the steadily deteriorating conditions. But the track had not yet dried enough for intermediate tyres to be the appropriate option. McLaren discovered this to their cost, and both Lando Norris and Carlos Sainz Jnr went no further after starting the session on intermediates.

Verstappen blew the rest of the field away, parking his Red Bull on top of the times sheets by two seconds. The Mercedes pair seemingly had nothing for the Red Bulls, though both made it through to Q3.

The Ferrari pair went no further, but to their dismay both cars from customer team Alfa Romeo made the cut for the pole position shoot-out.

Verstappen looked set to end Mercedes’ unbroken run of pole positions during 2020. It did come to an end – but not at the Red Bull driver’s hands.

Following the early runs Verstappen was on top but the track conditions were clearly beginning to improve. The Racing Point drivers opted for intermediate tyres and found superior grip from them.

Sergio Perez set the top time and Stroll joined him in a provisional one-two for the pink cars. Verstappen, meanwhile, was struggling to extract the most from his intermediate rubber.

On his final run Perez encountered Giovinazzi and was unable to improve his time. But Stroll lowered the mark further, finding huge chunks of time as his tyres warmed, pulling 1.5s clear of his team mate.

Verstappen had one run left in hand, but despite improving his time through the first two sectors it wasn’t enough. He split the Racing Points, but fell short of Stroll by less than three tenths of a second.

Albon backed him up in fourth place, followed by Daniel Ricciardo. Surprisingly the first of the Mercedes, in Lewis Hamilton’s hands, was only sixth. Ocon put his Renault seventh ahead of Raikkonen, Bottas and Giovinazzi.