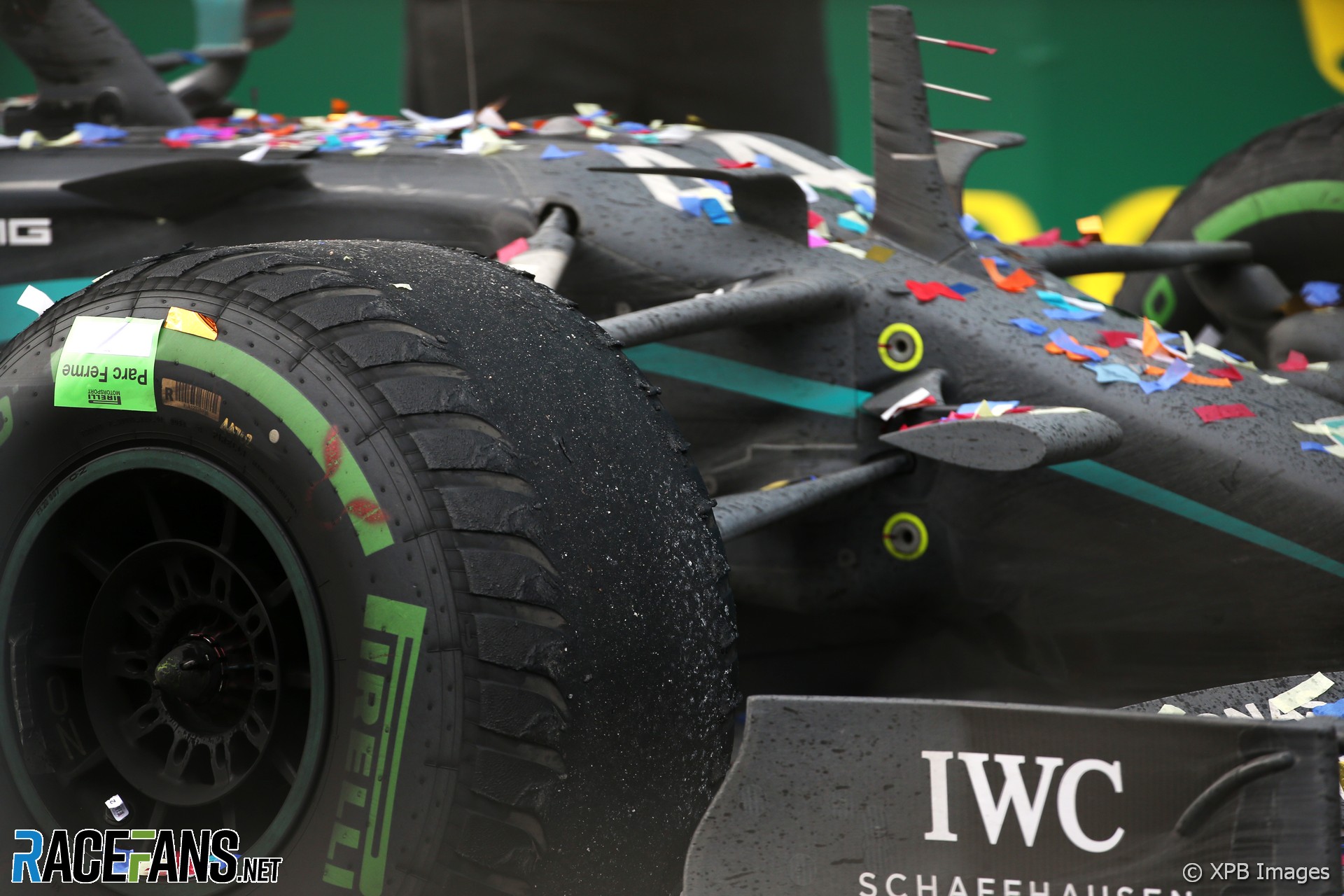 Mercedes weren’t concerned by the outward appearance of Lewis Hamilton’s tyres in the final laps of the Turkish Grand Prix, despite considering a late pit stop for fresh rubber as a precaution.

The team’s trackside operations director Andrew Shovlin said the condition of the tyres wasn’t the concern, but their susceptibility to punctures or temperatures drops was.

“They hadn’t got a lot of rubber on them but to be honest, in a race when you transition from inter[mediate] to dry, every set you take off should look like that. They should be bald because that’s when you know you’re at the transition.

“So the appearance wasn’t really the worry. It was more that we’ve never, ever done nearly 300 kilometres on one set of intermediate tyres.

“We knew that they would be fairly worn and then it’s kind of the risk of punctures and stuff. Although surprisingly there wasn’t a lot of carbon around on the track the risk was quite low. The worry at the end of the race was only really that on a very worn tyre it’s easier to pick up a puncture.

“Also there was some rain coming and our tyres wouldn’t have been great in a reasonable amount of rain, they would have struggled for temperature. So we were talking about a pit stop, but it was really a precautionary stop.”

In ordinary circumstances Mercedes wouldn’t have considered a late pit stop as it wouldn’t have been an option. However Hamilton had enough of a lead over second place for the team to debate a tyre change.

“Having the option kind of creates creates the dilemma,” said Shovlin. “Most races you can’t stop from the lead, take new tyres and still be in the lead.”

Hamilton said he did not pit because he recalled his experience of sliding into a gravel trap at the pit lane entrance during the 2007 Chinese Grand Prix. That error, caused by pitting later than he should have done, contributed to him losing the championship in his rookie season.

“What I’m learning as I get older is most often my gut feeling is right,” said Hamilton. “Most often, like intuition, the first thought that I have is usually the right one, choice-wise, and so I’m learning not to question myself.

“Back in 2007, I was a rookie, I was massively skilled but didn’t have the knowledge, didn’t have the experience to be able to lead the team, to tell them what was needed. If I knew what I knew now, I’d say ‘guys, I have to come in, I’m coming in’. I didn’t know at the time I could tell my team that that was the case, I was still learning what I could and could not do.”

Over the final laps on Sunday Hamilton asked the team what state his rear tyres were in. “I started getting vibrations in my tyres so I was constantly looking at my tyres, looking out for that bald tyre that I had in 2007. But I couldn’t see, again, in my mirrors. Just like in 2007 I couldn’t see the tread and whether or not it had gone through to that level. So that’s why I was asking the team.

“I was having to save the tyres through the high speed [corners]. Trying to not kill them but keeping temperature up was really key. So that’s brake balance, that’s how you use them on the exit of the corners. It’s the lines that you have to navigate to take – there was a lot of wet patches still out there. And as soon as you touch that, you’re off.”

50 comments on ““They should be bald”: Hamilton’s tyre condition didn’t concern Mercedes”