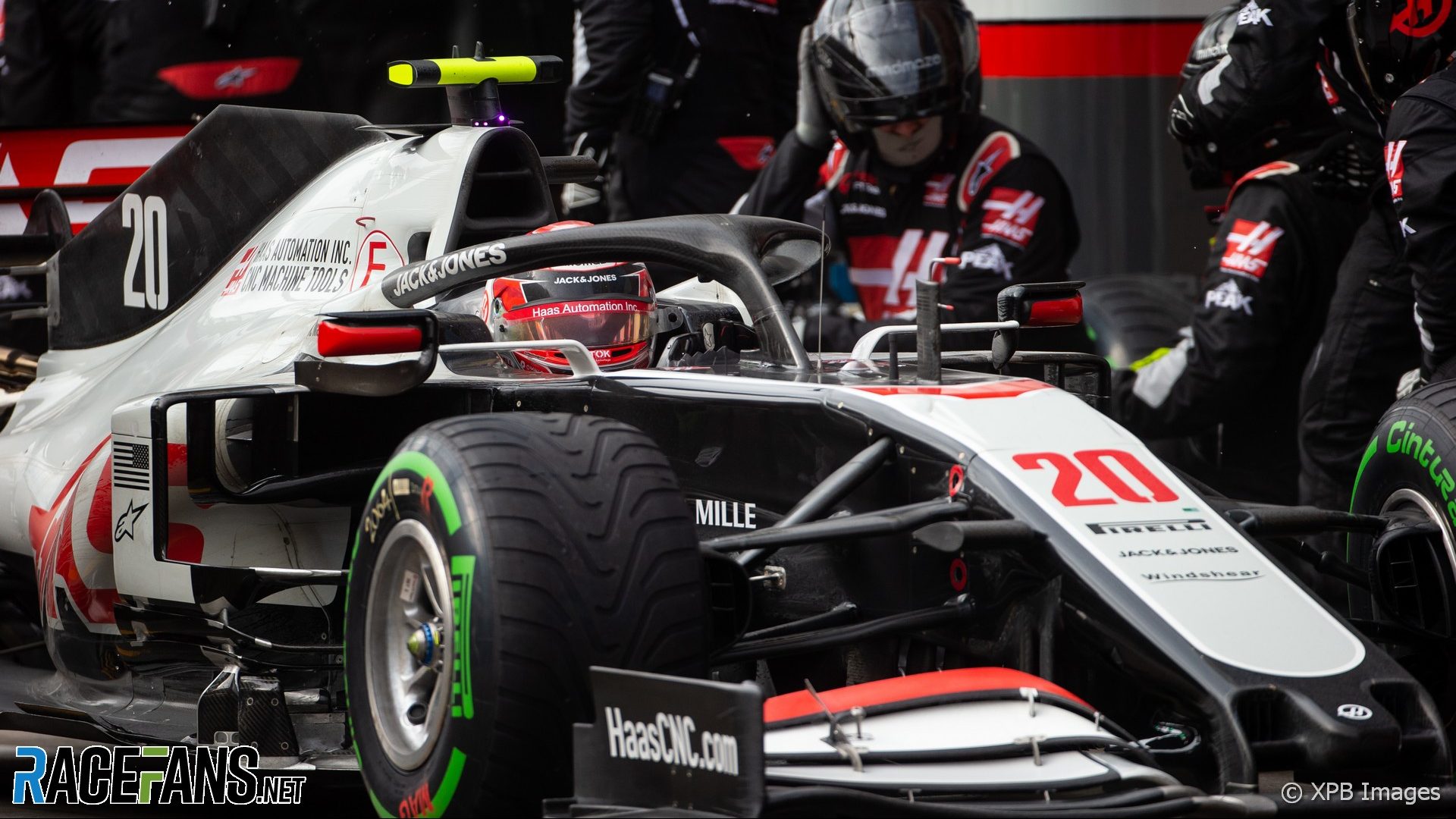 The Haas driver was running in 11th place when he made his second pit stop during the race. Although the team told him his pace was strong, they were concerned about falling behind other drivers following them who had pitted for fresh tyres.

“We just said we need to cover Russell because at the time it looked like we’d get a point,” said Steiner. “So we covered Russell and then the pit stop went wrong.”

As Magnussen pulled out of his pit box the team told him to stop his car due to concerns one wheel wasn’t fully attached. He had to be pushed back into his box and have fresh tyres fitted.

The delay dropped him two laps behind. Steiner said the confusion began when a wheel nut was crossed-threaded on Magnussen’s car, and a mechanic reached for a spare wheel gun to replace it.

“The thread was crossed and the guy went for another gun because he couldn’t get it off with the [first] one, and the jack man thought it was OK,” Steiner explained. “The guy didn’t give the go-ahead, but because the other guy went away to get the other gun, [the jack man] dropped the car and obviously Kevin went.

“So it was a misunderstanding because the guy didn’t give the green but he thought the guy’s going away and then he dropped the car and then once the car is down the driver goes.”

However Steiner suspects that even without the pit stop problem, Magnussen was unlikely to score points on Sunday. “I looked at the data, I think the best we would have come out is about would be 11th or 12th,” he said. “I looked at the graphs before because I wanted to know what is possible.

As soon as Magnussen rejoined the track after his last pit stop he warned his race engineer he couldn’t see drivers approaching to lap him. “It’s too dangerous with these blue [flags] and my mirrors,” he said. “I can’t see them.”

At one point Magnussen went off at turn nine while Charles Leclerc was lapping him. “Mate this is dangerous,” he said.

Later Magnussen drove onto the run-off at turns eight and nine to let other drivers past after being warned they were behind him. “I can’t see fuck-all,” he complained.

“I totally understand, I’m really sorry about the situation,” said his race engineer. “Well someone out there doesn’t understand,” answered Magnussen.

Steiner said the team initially decided to keep Magnussen out because his pace was quick enough that few cars were catching him. The team wanted him to remain on the track in case other cars ahead retired.

“The difficulty was he couldn’t see to the back because of the mirrors,” said Steiner. “I think they were dirty and with all the spray, you cannot see anything in the rear. And being in the middle, being with blue flags, it’s very difficult if you can’t see at the back. He didn’t want to hurt anybody’s race or do anything which then is deemed having done something wrong.

“I think he started to say that with about 12 laps to go. And in a race like this, you never know: If in the front there is mayhem happening in a group of five or six cars all of a sudden you can unlap yourself. It is a difficult decision because then you’d really look stupid if you withdraw a car.

“He was fast – once the group of the leaders went by, the three cars, Stroll was pretty well-controlled. We monitored the time and said nobody’s coming for 10 seconds at least. And he kept the 10 seconds up. So we decided to keep him out there and the car was going good.

“The chances of an opportunity were very small, but you cannot just give up. We understood that he is struggling but we knew also that for a while nobody would be coming behind him.”

Haas eventually decided to retire Magnussen in the final laps of the race. “For sure, for him it’s frustrating,” said Steiner. “But we spoke with him afterwards and explained the situation to him.

“In the first instance when we explained it to him he said ‘it’s difficult to make two laps up’. Yes, but in this race, just think if mayhem happens in a group of six cars, they take each other out, all of a sudden you’re in a different position.”