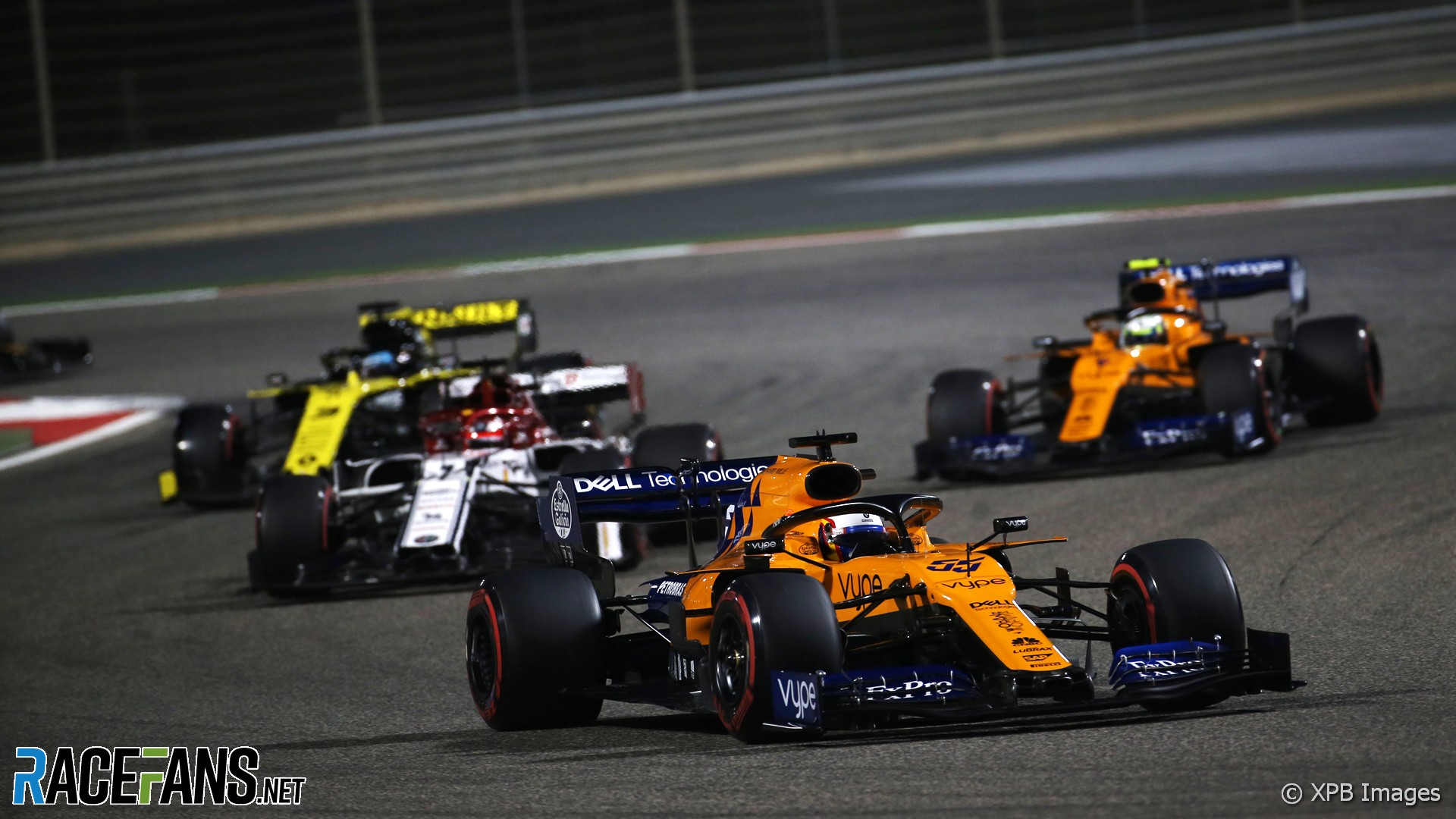 Formula 1 drivers expect a new challenge and a lively grand prix when F1 returns to the Bahrain International Circuit for a second race on its shorter ‘Outer’ circuit next week.

The familiar 15-turn, 5.4-kilometre circuit will host this weekend’s Bahrain Grand Prix. However next week’s second race at the venue, dubbed the Sakhir Grand Prix, will take place on the shorter, 3.5-kilometre ‘Outer’ circuit.

By F1 standards, its layout is very simple, with just four braking zones at the most. Lando Norris said the “unique” circuit reminds him of Thruxton in Britain: “It’s not many corners – small, sharp corners, the ones we have in Bahrain – but at the same time it’s a very small oval kind-of shape track and very short as well.”

As most of the track is shared with the grand prix layout, Carlos Sainz Jnr says it won’t take long for drivers to get up to speed on it.

“There’s only two extra real corners that we will do in Bahrain,” he said. “The rest of the two or three corners that track will have, we will race there one week before. So it will be fairly easy to get to learn it then and to maximise every corner.”

However Sainz says it could be tricky to judge downforce levels at the track as much of it will be flat-out.

“It’s going to be a challenge to find the right compromise on the set-up because it’s not a typical track for Formula 1,” he said. “You never go to this kind of circuit with only long straights and two or three corners to really drive around.

“It’s going to be a bit of an experiment for Formula 1, I think it will generate some different kind of racing. There will be a lot of talk regarding rear wings, what downforce level you run and all that. That obviously has our input, as drivers, but it’s more simulation work, more engineering work that the team needs to figure out how to arrive there as well-prepared as possible.”

The short layout will make for a more congested track during qualifying and the race. George Russell said the event is “definitely going to be bonkers” and pointed out small driving errors could have major consequences in qualifying.

“It’s exciting because the lap times are going to be so close, I reckon everybody will probably be within a second in qualifying. Which means if you make one small mistake, you can be losing loads of positions on Saturday.

“So it’s going to be giving it absolutely everything you’ve got, making sure you nail the lap because there more than anywhere if you do make a mistake, you don’t have enough corners to make that lap time back up. So it’s going to be exciting.”

Simulations have indicated lap times could be less than 54 seconds if three DRS zones are used. “It will be probably a bit of a mess on Saturday because everyone will be looking for slipstream,” said Russell. “I don’t know how short it is but there’s probably not enough space to fit 20 cars on there and the racing is going to be pretty wacky.”

Only a short section of the circuit differs from the regular layout. However Esteban Ocon, who has already tested the track in Renault’s simulator, was impressed by the alternative route.

“The first bit is the normal Bahrain track, but then straight away into the straight line on the back,” said Ocon. “It’s actually some decent corners in there.

“I hope we are going to be able to follow closely for us to be able to overtake because if it is not, it’s going to be probably the same as the Bahrain circuit. Which is great for overtaking but we want something a bit more spicy, being [we’re] staying on the same layout.”

Whether drivers are able to overtake each other easily will depend partly on the unfamiliar, fast sequence of corners in the middle of the track, said Daniel Ricciardo.

“It’s going to be interesting. I don’t think we’ve come to a circuit like that before with so few corners followed by quite long straights. I hope at the chicane we can carry enough momentum to get close and to get a tow and to set up some overtaking maybe into the last corner, for example.”

“I am a fan of changing the layout,” he added. “If we’re going to go to a circuit twice in two weekends, let’s change it. So I am ‘for’ that and I’m excited to see how it performs.”

However Nicholas Latifi says Williams’ simulation of the track indicates the little-used link between the two familiar sections of Bahrain’s circuit could be quite rough.

“The new part of track that we’re going to be driving on seems to be quite bumpy,” he said. “It’s obviously not used a lot. I’m not sure if it’s going to be re-paved or if it’s just very, very old Tarmac.

“That’ll definitely change quite a lot the profile of the track and probably quite a bit the set-up that we use. It’s basically now just combining three long straights together as opposed to the whole infield section in Bahrain where you need a bit more downforce.”

Latifi predicted the track will “throw up a unique challenge from the car set-up point of view” and “switch it completely from how it is on the first race weekend.”

“From a racing aspect, whether the racing action will be better, I’m pretty sure it will be,” he predicted. “But I think it’s going to be quite interesting in practice and qualifying with all the cars on track at once. It’s obviously not a lot of real estate to have all 20 cars on.”