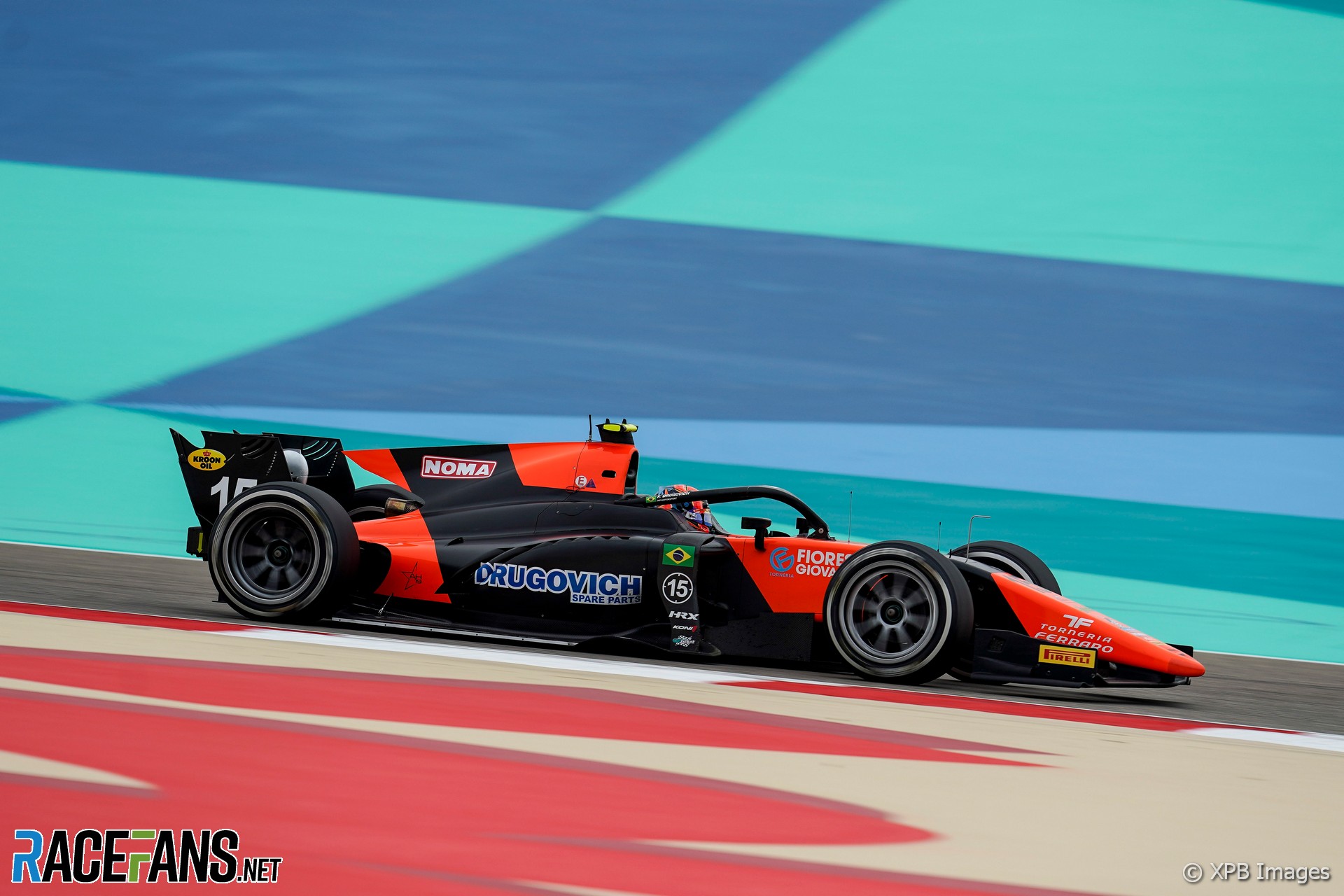 Felipe Drugovich scored his third Formula 2 victory of the year – and his first in a feature race – with an emphatic win in Bahrain.

The MP driver came home almost 15 seconds of Callum Ilott, who failed to convert his pole position in into victory, but further cut into championship rival Mick Schumacher’s points lead.

Drugovich lined up next to Ilott, with Dan Ticktum and Marcus Armstrong on the second row. Ilott made a sluggish getaway and fell prey to Drugovich, who took the lead off the line. Schumacher, who has been renowned for his starts this season, outdid even himself with a first-lap charge from tenth to fourth. “He always seems to make better than the best start I can,” Ilott admitted after the race.

However he was fortunate to emerge unscathed from a tangle with Guanyu Zhou. The Virtuosi driver had to pit for a new front wing after clipping Schumacher’s left-rear tyre, though the Prema driver’s Pirelli remained intact.

Armstrong, whose season has mostly been almost uniquely horrible in terms of mechanical failures, was able to make good on a struggling Ilott round and pass him for second place. That had an almost chain reaction effect of feeding Ilott back into Schumacher’s clutches and forcing him further down the order. By lap 12, an error from Armstrong let Schumacher easily pass him for second place.

Ilott’s woes were worsened when he lost several seconds due to a slow front-left tyre change when he came into the pits on lap 13 to get rid of his heavily-grained medium compound. However he was much happier with his car’s balance after switching to the hard tyres and began to make progress.

Drugovich was able to eke out his starting tyres for another three laps, pitting from the lead and coming back out ahead of Ilott. While his chances had looked slim after the first stint, Ilott was able to hold on to move up and then hold on to second, but could do nothing about the flying Drugovich.

Meanwhile Schumacher, having started on the hard tyres, found himself stuck in fifth after switching to the mediums. He passed Armstrong with little difficulty in the DRS zone, then closed on Jehan Daruvala. He spent several laps inspecting the rear of the Carlin closely, Daruvala defending carefully, well aware of Schumacher’s need for circumspection given the championship situation. He clung on over the final laps, securing his first podium finish in F2.

Drugovich took the chequered flag comfortably ahead Ilott but with the championship still alive, Schumacher finishing fourth. Yuki Tsunoda, who had failed to set a time in qualifying following a spin, made his way from the back of the grid to sixth during the race to mathematically stay in the championship running.

Schumacher now stands on 203 points, with Ilott’s second place closing the gap to put him on 191. Robert Shwartzman finished eighth, putting him on reverse-grid pole for tomorrow’s sprint race.