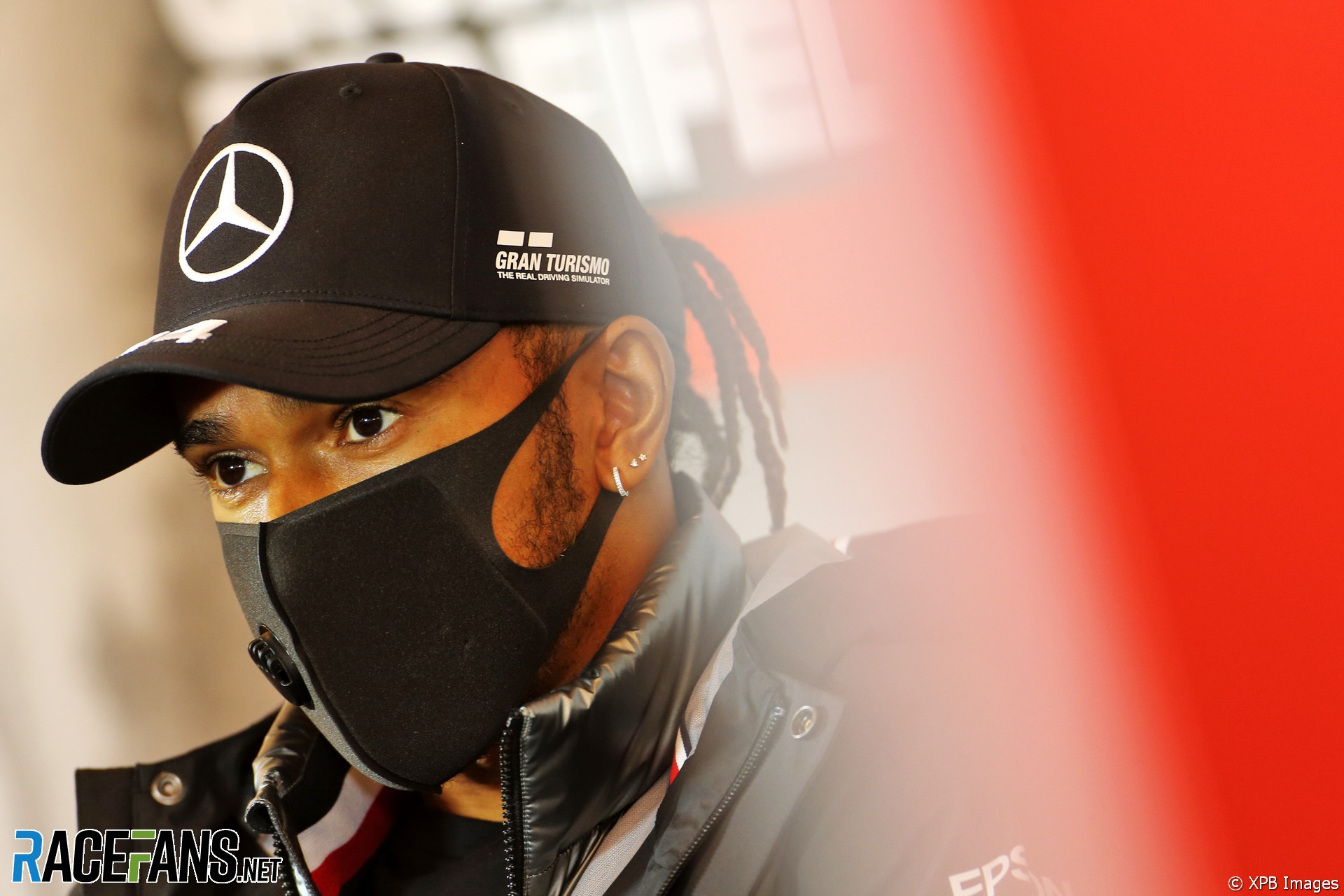 Yas Marina hasn’t always provided excitement but following two dramatic races there are many storylines of interest at the season finale.

The first and biggest question for the race weekend ahead is the obvious one – who will drive for Mercedes?

Having first tested positive for Covid-19 on November 30th and missed the Sakhir Grand Prix as a result, Lewis Hamilton reappeared on social media last Tuesday to reveal he had begun training again and intends to return this weekend.

Official word is expected soon on whether he has had the necessary negative Covid-19 test and will return. None will be more eager to learn whether he will be back than George Russell, who did an outstanding job as his substitute last weekend. Jack Aitken, who took Russell’s place at Williams, will also be keen to learn if his services are required again.

The absolute latest Hamilton can return to the cockpit is 5pm on Saturday evening for the qualifying session, though Mercedes would no doubt want to field someone else in his place for practice if he can’t come back before then.

Mick Schumacher’s debut for his 2021 team

Haas have expended more of their public relations efforts than they would have liked on their other new driver for the 2021 F1 season already this week but an easier story to sell by far is Mick Schumacher’s grand prix weekend debut for the team.

Schumacher had been set to run in first practice for Alfa Romeo at the Eifel Grand Prix, with Callum Ilott due to drive for Haas in the same session. However, heavy fog prevented the medical helicopter taking off and although the session was technically started, cars remained confined to the pit lane for its entirety, and neither driver got a single lap in.

Now Schumacher’s been given a second chance to have a practice run and the weather should surely be much better at Yas Marina. Having sealed the Formula 2 title last weekend and with the post-season Abu Dhabi test ahead of him, this is a special moment in his progression to Formula 1.

One driver has already confirmed they will leave Formula 1 after this race. Kevin Magnussen will drive his final Grand Prix for Haas at Yas Marina, before shifting to an IMSA sports car campaign for 2022. He has been in Formula 1 since 2014, although he sat out 2015 as McLaren’s reserve, and will leave the sport after 120 grand prix entries.

Magnussen’s Haas team mate Romain Grosjean had hoped to return for the Abu Dhabi Grand Prix, following his horrifying crash in Bahrain. However he has returned to Switzerland with his family following medical advice, but he might still get a last hurrah in a Mercedes next year.

Daniil Kvyat’a future hangs in the balance. Given his recent words he seems resigned to losing his seat to Formula 2 rookie of the year Yuki Tsunoda.

The most notable potential exit, however, is last weekend’s race winner: Sergio Perez has no confirmed 2021 drive and despite hints he is in contention for the second Red Bull seat, the team remain firm that they will decide between him and Alexander Albon post-season. A grand prix win seems a convincing argument, unless Albon can somehow counter that this weekend.

But another driver who impressed in Abu Dhabi – Russell – is the subject of rumours that Red Bull could make an audacious swoop for the Mercedes junior driver.

Finally, we will also say goodbye to two team names. It’s the last race for Renault before they become Alpine, and the Racing Point name will be replaced by Aston Martin at the Silverstone-based squad for next season.

It seems almost impossible to believe, especially after Max Verstappen exited the last grand prix at turn four of lap one, but Valtteri Bottas is still not safe in second place in the drivers’ standings.

Verstappen trails him by 16 points – a sizeable gap but not insurmountable, especially as Bottas has taken just eight points from the last three races. If Red Bull can take advantage of any more mistakes from the world champions and Verstappen avoid another disastrous early retirement, then he could still harass the Mercedes driver down to third.

Bottas has suffered one official retirement, at the Eifel Grand Prix, and one limp home outside the points with a blown tyre at Silverstone, while Verstappen has had five no-scores due to collisions or technical failures. Bar Turkey, all his finishes have been inside the top three.

McLaren pair Carlos Sainz Jnr and Lando Norris are neck-and-neck in the qualifying battle. It’s 8-8 between them, and Yas Marina should decide a fight which was also tied at the end of last season.

Perhaps slightly more surprisingly, Kimi Raikkonen and Antonio Giovinazzi are also equal in their qualifying battle at Alfa Romeo. Both have only made Q3 once but Raikkonen just has the edge on Q2 appearances, with three to Giovinazzi’s two. They’re also on four points apiece, despite two more retirements for Giovinazzi than Raikkonen so this is the last chance for either to claim off-season bragging rights.

Fernando Alonso, being given as much running as possible before his 2021 Formula 1 return, will be doing demo runs in a Renault R25. It’s a car he should be reasonably familiar with, as he won his first world drivers’ championship in it 15 years ago.

There will be no crowd present at Yas Marina to see the demo runs but it will supply Alonso with yet more track time ahead of stepping into the 2020 Renault car for the post-race test. This has attracted controversy, as the test was originally intended for young drivers only, but Alonso is now due to be joined by Robert Kubica and Sebastien Buemi as well.

Sainz and Norris have proven an entertaining pairing off-track and, most crucially, an effective pairing on the track as well over their past two seasons for McLaren. The team has returned to the top of the midfield and is in contention for third place in the constructors’ title still. Sainz’s McLaren performances have bolstered his reputation, and a promotion to Ferrari next year is his reward.

It comes at the expense of Sebastian Vettel, whose six-year Ferrari stint ends without the crowning glory of a championship. He and team mate Charles Leclerc have not always had an easy relationship on the track, but this season Vettel’s biggest struggle has been with the car, which he declared himself “no longer friends” with at Sakhir. It would be a significant ask for his time at Ferrari to end on a high, having achieved just one podium this year, in Turkey.

Daniel Ricciardo is also moving on, from Renault, to take the seat vacated by Sainz. Given Renault’s resurgence this season, he has been asked many times in recent months whether now is the right time to leave.

The stakes won’t be as high as usual in the fight for third, fourth and fifth in the constructors’ championship. With F1’s earnings reduced by the pandemic, Racing Point, McLaren and Renault are scrapping over a difference of around $7 million, whereas in a normal season it might have been twice that or more. Nonetheless, every penny counts, and there’s no small matter of pride at stake too.

Even Sainz is amazed that Racing Point have not sealed third place in the constructors’ championship given their superior pace and, last time out, a grand prix win

McLaren entered Sakhir in the lead, but were not as competitive on the outer circuit as Racing Point and left the weekend 10 points behind. Despite a podium and fifth place, Renault lurk a distant 22 points adrift, needing a big haul to surpass the team they successfully protested at the start of the year. But Racing Point’s form is so variable it’s far from certain they’ve got a lock on the number three spot.

What do you expect from the final race of 2020? And what will you miss about this year’s championship? Have your say below.

Plus, don’t forget to enter your predictions for this weekend’s race. It’s your last chance to win a copy of F1 2020 in the competition this year. You can edit your predictions until the start of qualifying here: