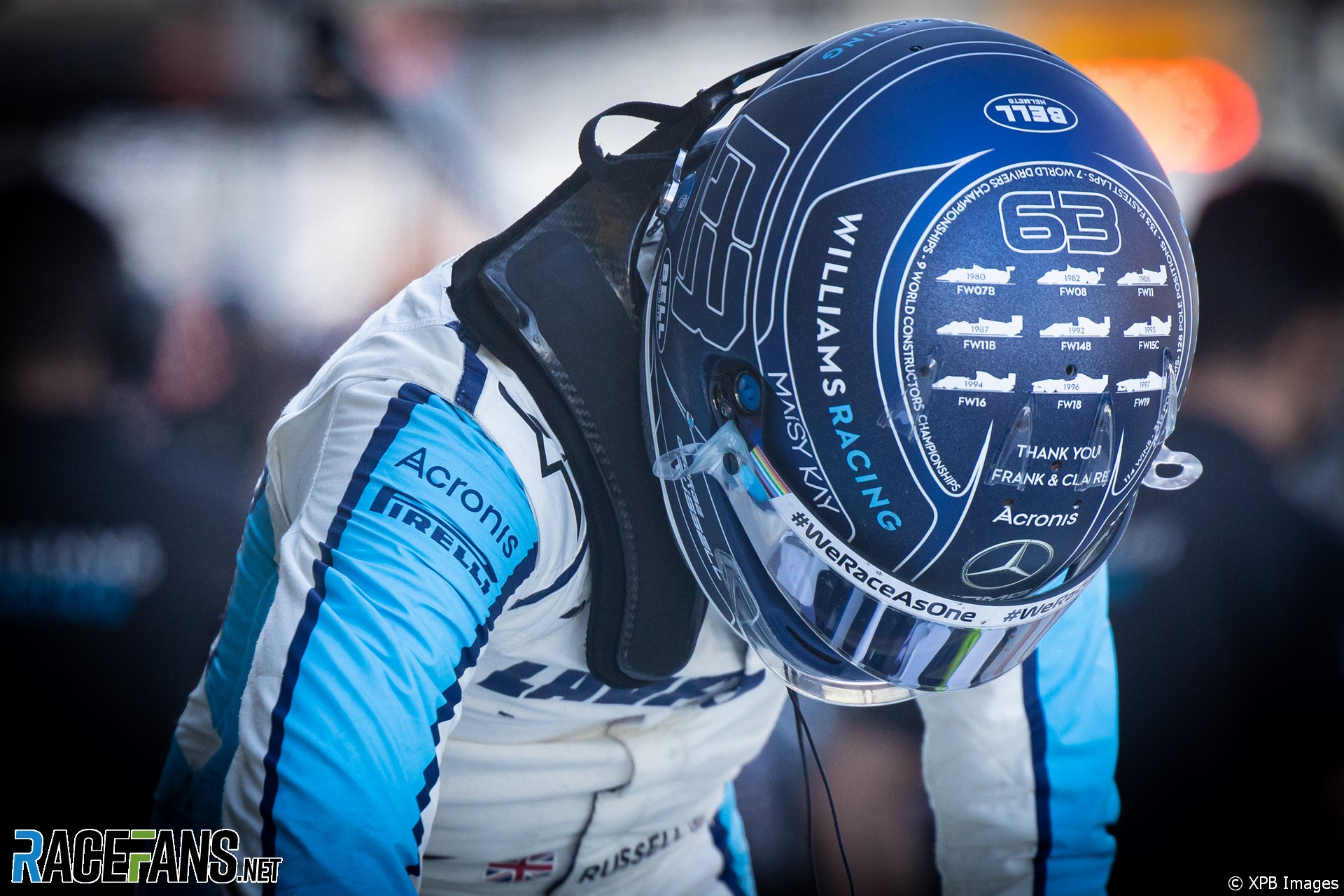 In the round-up: George Russell expects a lively fight in the midfield given the close points situation ahead of tomorrow’s season-closing race.

Russell, back at Williams after his Mercedes sojourn, says that the tight competition between midfield teams – and high stakes of this being the last race of 2020 – could provide opportunities for a backmarker team:

Given it’s the last race of the season everybody up and down the grid gets a bit desperate.

On pure pace we know we won’t be fighting for the top 10, we were struggling today, in all honesty. Kimi looked really fast, and Kevin. But that’s usually the case, we’re usually a bit off on Friday and we usually sort it out on Saturday.

Did @LewisHamilton watch the #SakhirGP?

But he's not keen to go into the details of his recovery after contracting Covid-19. #F1 #AbuDhabiGP pic.twitter.com/SX4BuVAtxX

VOLUME UP! 🔊@alo_oficial is out on track taking his 2005 championship winning @RenaultF1Team car for a spin! 😲

To add to this – the lap time would have been about 1 second off @alo_oficial's fastest lap in the 2013 race, the same pace as Hamiltons FL in 2015 and he would have out-qualified the Caterhams in 2014 (sorry @KevTs). Not bad for a young driver. https://t.co/OWgfYFWnkf

"Stefano is joining Formula 1 on the first of January and is looking forward to this new and exciting challenge. Any rumour or speculation otherwise is wrong"

"Every NASCAR driver will be challenged by the same 20-turn, counter-clockwise circuit designed for Formula 1 racers."

Valtteri and Lewis quickest on Friday in Abu Dhabi (source)

Andreew Shovlin: "Lewis had an issue with his brake pedal assembly this morning that meant we lost the first bit of FP1 and he couldn’t run the soft tyre. We also had a problem with Valtteri’s throttle pedal that we changed as a precaution during the second session. Both those issues cost us a few laps and the red flag towards the end meant we didn’t get to do a long run on the medium tyre. "

"Looking at the gaps today, I think it’s going to be really tight this weekend, with six or seven positions separated by one and a half tenths."

"The twenty-six case studies of the Report are organised into six broad themes. Firstly, motor sports’ contribution to better healthcare, beginning with the recent response to the Covid-19 pandemic, where the industry came together to help support global healthcare needs. Secondly, examples of technology and knowledge transfer that have positively affected society at large; spanning electric bikes and airline seats. Thirdly, improved road safety; ranging from motorcycle helmets to safety simulations to the work of the FIA Foundation."

"Honda will start the 2020 Kyalami 9 Hour from pole position after Mario Farnbacher set a new qualifying lap record ahead of tomorrow’s Intercontinental GT Challenge championship showdown. But it was a tough afternoon for championship leaders Earl Bamber and Laurens Vanthoor whose Dinamic Motorsport 911 could manage no better than 10th."

"The FIA has revealed the full and final entry list for the 2020-21 Formula E world championship, with little over a month to go until season seven gets underway with a double-header in Chile, January 16-17."

As several drivers prepare to move on from their current teams after this weekend, Bernasaurus muses on the way a driver’s personality can reflect back onto the garage that works with them:

Being in an F1 team must be a strange working environment in a sense, I can’t think of many others where the whole focus shifts onto another individual as it does when an F1 team replaces a driver.

If Grosjean’s side of the garage gets allocated Mazepin, after six years of someone who seems like a personable, food-and-family kind of guy (prone to a radio whinge or two) Mazepin seems very different.

When you’re a group of people tasked with bringing out the very best in an individual, it must be quite a change.
Bernasaurus