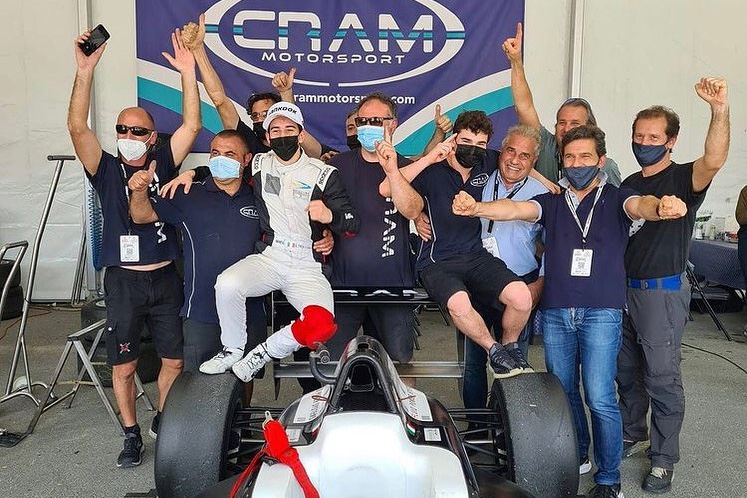 In the round-up: Enzo Trulli, the 15 year old son of one-time F1 race winner Jarno Trulli, clinched the Formula 4 UAE championship title yesterday after his title rival tangled with another driver in the final race.

Trulli’s rival Dilano Van’t Hoff, who was also competing in his first single-seater championships since graduating from karts, led the series for much of the season. The title fight went down to the wire in the quadruple-header season finale at Dubai.

Cram driver Trulli was unable to start the second of those due to a suspension problem and went into the final race a point behind his rival. He started fifth, two places ahead of Van’t Hoff on the partially reversed grid, but fell behind his rival on the first lap.

The Safety Car was deployed due to an early incident, and after it came in on lap three Van’t Hoff tangled with Hamda Al Qubaisi and went wide. Trulli took the advantage and grabbed third place, which he held to the flag. Van’t Hoff kept up the pursuit and crossed the line just three-tenths of a second behind Trulli, who took the title by a single point, despite having won four races during the year to Van’t Hoff’s five.

Trulli, who said his father cried when he clinched the title, will continue racing in the Spanish F4 championship this year with Drivex.

"I think American motorsport has that bit sorted out very well. They kept the really kind of pure DNA of motorsport. They’ve retained that a little better than they have in Europe."

Giovinazzi on overcoming mistakes, learning from Kimi and his Ferrari F1 dream (Crash)

"If I do go out and win F2 this year, then that would be three championships in a row. So I don’t really know what more I could do than that. But obviously we all know that F1, there’s not just skill involved; obviously timing is a massive part of that as well."

This weekend’s debate asks whether F1 should change its event format by introducing sprint races:

For me some of the best action of the weekend is with two or three minutes to go in Q3 on Saturday, I’ve been looked at like I have a mental problem by my wife when someone puts in a fast lap, she always asks “ what’s so exciting about that? They’re not even racing”. Well, only hardcore F1 fans will get what I’m talking about.

Saturday sets up the excitement for Sunday especially if a Red Bull gets in between a Mercedes or a Ferrari grabs the pole. Saturday sprint races I genuinely feel will take away that feeling of looking forward to waking up at 4am or 5am to watch the grand prix and the thought of not knowing who has what pace. Saturday may be a quick shot of adrenaline but come Sunday that adrenaline will slowly wear off to the point of not setting the alarm clock to watch on Sunday.
Josh (@Canadianjosh)