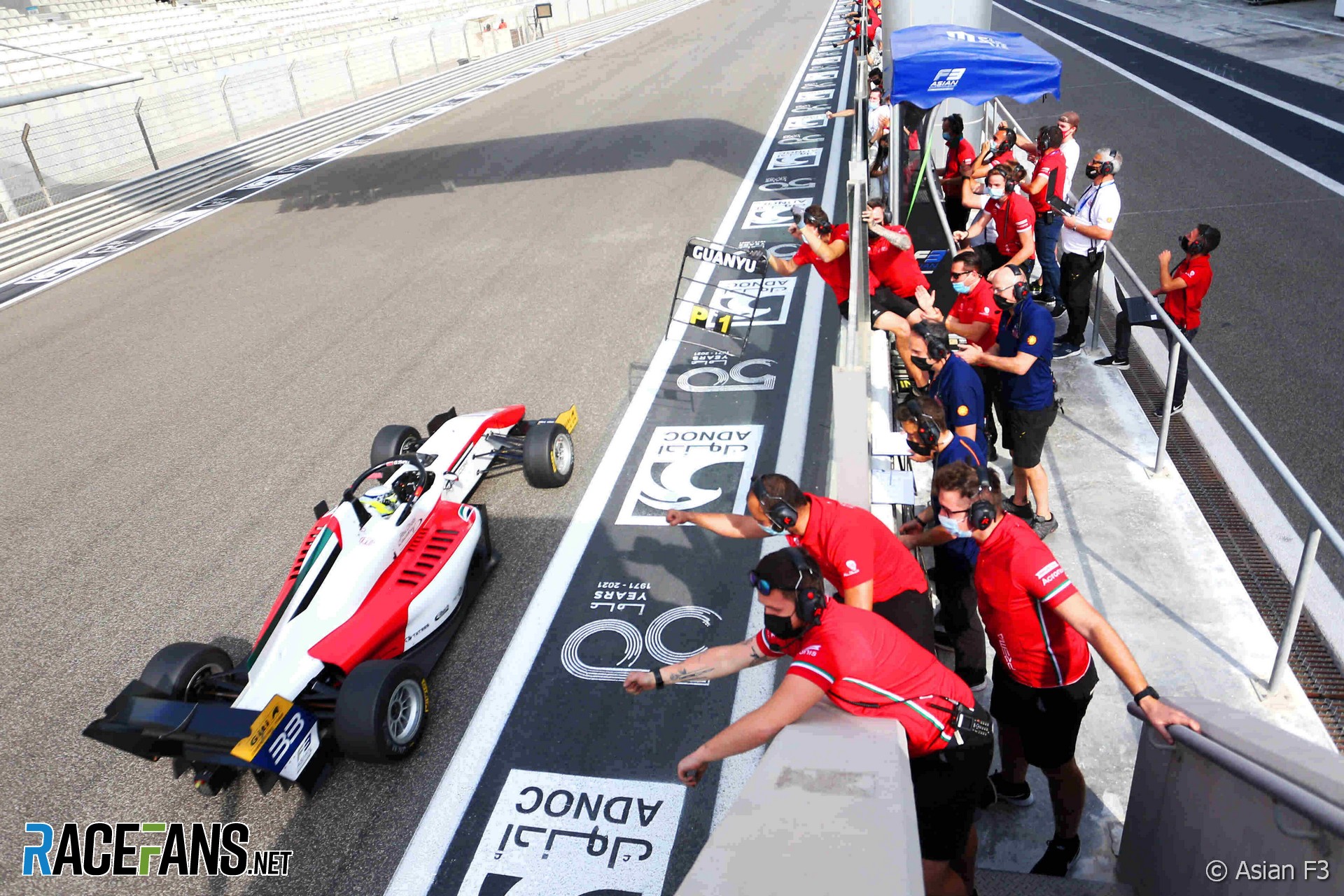 Zhou went into the final triple-header round at Yas Marina 32 points behind leader Pierre-Louis Chovet. The Alpine-backed racer got his weekend off to a strong start by putting his Prema-run Abu Dhabi Racing car on pole position for the opening race.

He lost the lead at the start to Patrick Pasma and followed his rival home, but was elevated to first place when Pasma was penalised five seconds for failing to slow sufficiently for yellow flags. Chovet could only manage fifth place.

Pasma repeated his fast start in race two but this time kept his resulting victory ahead of Zhou. Pasma’s weekend got worse, however, as he tangled with Roman Stanek on the first lap and retired. In two races Zhou had overcome his rival’s advantage, and Chovet went into the final race a point behind.

Zhou had pole position again for the title-decider and this time he kept his advantage at the start. His fourth victory in the 15-race series secured the title ahead of Chovet, who having won six times earlier in the season endured his first win-less weekend of the year.

Zhou, who will race for Virtuosi for a third season in Formula 2 this year, scooped 18 FIA superlicence points along with his championship trophy. His F2 rivals Jehan Daruvala, Roy Nissany and Alessio Deledda placed third, fifth and 15th in the championship respectively.

"SportsTek Acquisition Corporation, which went public on the NASDAQ stock exchange Thursday, was formed exclusively to acquire or partner with existing sports entities, and according to its co-chairman, Tavo Hellmund, a Formula 1 team is a possibility."

"Lando (Norris) is a pretty funny character and he is very personable and quite jokey. I think he said that maybe he should be a bit more serious, but in F1 there is definitely no harm in having those personalities on the grid. That’s certainly why fans gravitate towards certain drivers."

AlphaTauri have done the right thing by not fitting Red Bull’s 2020 gearbox and rear suspension to its new car, says HK:

I think this will prove to be a wise decision.

It’s unclear if the RB16’s unstable rear end was the fault of the rear suspension, or if it was just some aero parts stalling, or more likely a combination of them both. Only Red Bull and AlphaTauri will know if it would be an actual upgrade in performance or not.

But then, as the team has pointed out, performance can be found all over the car. With a finite amount of resources, especially with the ’22 project running in parallel, you have to invest in the areas that are going to bring the most gain. It’s unwise to invest in something that will bring a tiny gain for a whole lot of effort. Especially since last year’s AlphaTauri suspension worked so well for them.
HK (@me4me)