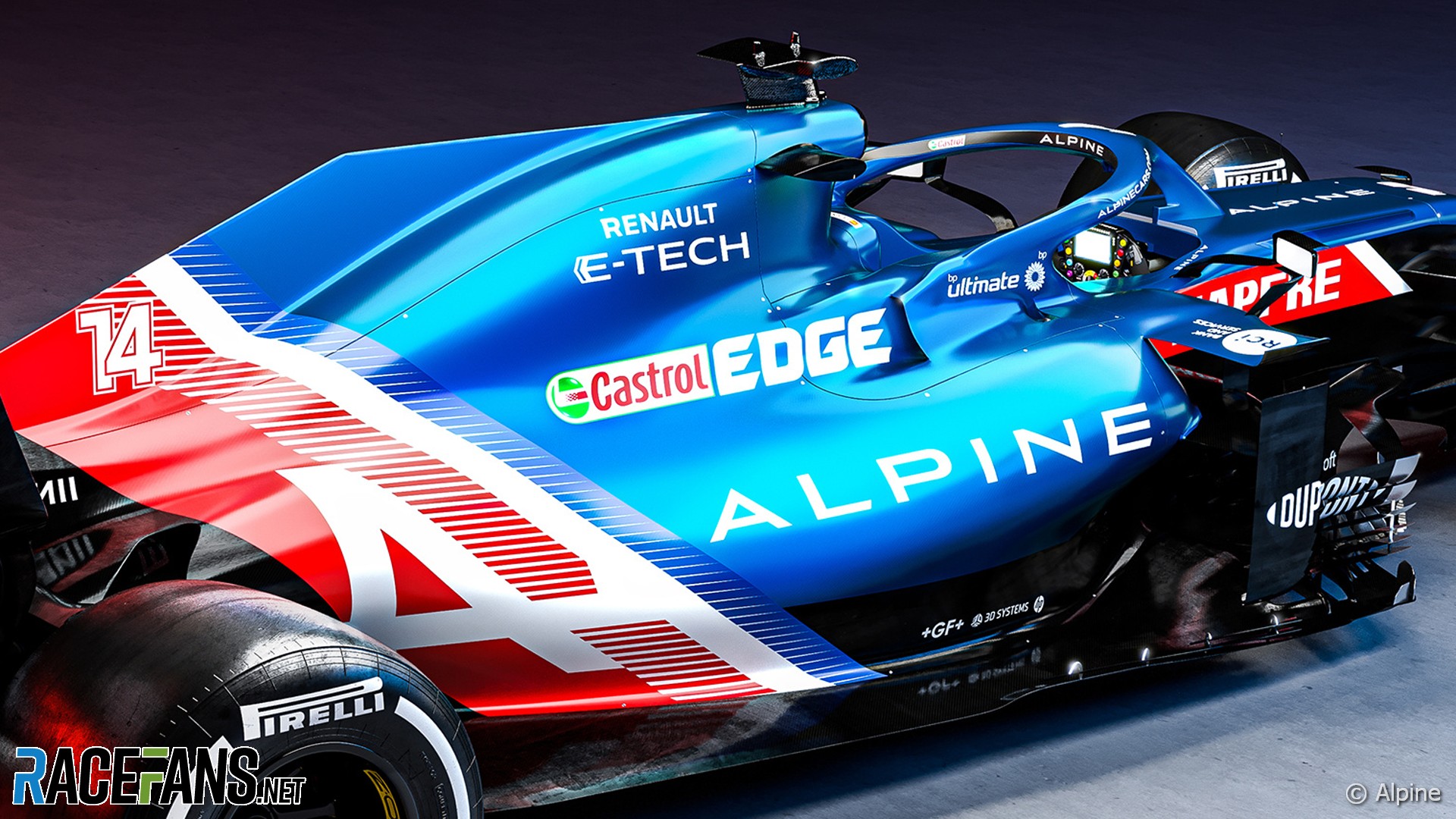 The Formula 1 team colloquially known as ‘Team Enstone’ and racing this year as Alpine F1 Team has a chequered history. Founded during the seventies as Toleman Motorsport in Brentwood, Essex, the team then owned by the eponymous car delivery company competed in saloon car racing and junior single-seaters before moving into F2.

By then operating out of a factory in Witney, Oxfordshire, Toleman claimed the 1980 F2 title courtesy of Brian Henton and substantial BP sponsorship, setting the stage for a move to F1 using basically the same design, save the two litre Hart engines downsized to 1.5 litres and turbocharged as permitted by the regulations. In 1984 the team scored podiums and came close to winning in Monaco with Ayrton Senna, then still a rookie.

However, by the end of 1985 Toleman had hit the skids. Disputes with tyre supplier Pirelli left Toleman briefly tyre-less in 1985. Eventually team sponsor Benetton bought a tyre allocation from another team, then triggered its purchase option of the team, which thereafter raced (and won) as Benetton Formula.

Having moved into a state-of-art facility in Whiteways in Enstone (Oxfordshire) in 1992, more success was to follow: Michael Schumacher won the 1994 and 1995 world titles with Ford and Renault power respectively before moving to Ferrari.

The Benetton family then saw the writing on the manufacturer wall – in quick succession BMW, Ford, Honda, Mercedes and Toyota committed to F1 – and sold to Renault in early 2000. Crucially, team boss Flavio Briatore stayed on and the playboy Italian repeated the team’s back-to-back successes – in 2005 and 2006, Fernando Alonso.

However, the Genii team – renamed ‘Lotus’ – struggled and found itself in dire straits by 2015. Finally, Renault stepped in as saviour with a pledge to rebuild the operation. Finally, during the topsy-turvy season that was 2020 Renault landed on the podium (thrice), then re-signed Alonso on a three-year deal (2021-13) for good measure. From this year ‘Team Enstone’ will race as Alpine F1 Team – its fifth name change in 30 years.

There is another strand to Renault’s F1 history. A team known as Renault Sport entered F1 in 1977 with chassis based on a design study by subsidiary company Alpine, acquired by Renault in 1973. The 1975 A500 chassis pioneered the use of downsized, turbocharged F2 engines as permitted by the then-regulations and built in Viry-Châtillon, outside Paris. Two years later black design morphed into the yellow RS01 entered under the ‘Renault Sport’ banner.

A maiden victory came on home soil in Dijon in 1979, and the team touched the hem of the 1983 title, but then slumped. By 1985 it was over although engine supply continued another year, most notably with Lotus and Senna. In 1989 Renault returned with Viry-built V10s – initially as partner to Williams, then also Benetton.

Five titles resulted: four with the former (Mansell, Prost, Hill, Villeneuve) and one via Schumacher (above); then in 1997 Renault withdrew (again), licencing its technologies to aerospace company Mecachrome, which supplied engines as Supertec. However, in 2001 the power units were (again) rebadged – to ‘Renault’ – and installed in the ‘Team Enstone’ Renaults. V10 and V8 derivatives powered Alonso to his two titles.

Remarkably, several of these convoluted threads – namely Renault, Alpine, Enstone, Viry-Châtillon, Mecachrome, Alonso and even Pirelli, BP and Genii (the fund retains 10% of the team and owner Gerard Lopez is listed as Alpine Racing director) – will converge in Bahrain under the patriotic blue-red-white Alpine F1 Team livery, with the car known as A521 as a nod to that original design study.

A few days ahead of pre-season testing the question in F1 circles is whether this cocktail of historic strands can be pulled together to replicate the successes of the past and gel into more than merely the sum of the parts, which as individual ingredients proved gloriously successful at some points, but seldom in unison. To compound this mighty challenge Alpine heads into its maiden season without a traditional structure.

During last week’s team video launch (from which Alonso was absent, having fractured his jaw in a cycle accident, though he popped up smiling and waving as the credits rolled) RaceFans asked Alpine CEO Laurent Rossi, an engineer who had two spells with Google plus one as outside management consultant before re-joining Groupe Renault where he most recently headed up the company’s business strategy unit, to explain that structure.

“In the team, the top structure under me is [executive director] Marcin Budkowski and [the team’s new recruit, ex-Suzuki team boss] Davide Brivio,” he explained. “Marcin will be in charge of the development of the chassis and powertrain, so will coordinate the whole development of the car.

“Davide will be racing director, so the two of them will work in tandem to extract the best out of the car that’s been designed in Enstone, and to put it in the best position possible in the future.

“The rest of the teams are keeping their existing structures to Marcin in Enstone or to myself in Viry, which is a bit of a different situation, because it’s a [power unit] manufacturer, but besides those two lines the rest state stays like it was last year.”

Rossi outlined his executive style, philosophies and management objectives: “It’s my objective to have strong people around [me]; the main lesson in life is that you don’t do anything alone. [You need] to be resilient in any environment, you need skills, you need demeanour, you need a lot of luck. F1 is exceptionally high pressure in terms of environment; you need a strong team.

“That’s why we brought Davide on board. He has proven experience in managing teams and championships under pressure. This will help to create and lead the team.

“Then of course, starting with Marcin but extending to Enstone and Viry, we have extremely skilled people at the helm developing our car. This is what we need.

“Basically, I’m modestly here managing all of these people towards one same goal, providing them with support, whether it’s logistical material, or, sometimes I hope, intellectual. I hope I have really surrounded myself with the great ones, that’s how you thrive.”

Which is all well and good, but forget not this is a team in a rebuilding phase – three podiums in the five years since Renault reacquired the operation attest to that – and Rossi’s ‘day job’ is totally rebuilding the Alpine brand into Renault’s equivalent of Mercedes AMG, Audi Sport or BMW M plus overseeing all Groupe Renault’s sport and competition activities rather than only going grand prix racing full-time.

“If you look at the brands around us, the teams we’re competing against, most of them are true sports brands. In that respect, Alpine is already a sports brand selling [a car] like the 110 now but other models back then were celebrated as efficient sports cars,” Rossi said.

“So even off-track, the Renault name was a good one to have, but the Alpine name is even more legit in the current F1 universe.”

Still, the F1 team is a single component in the overall Alpine (and wider group) marketing mix, yet during this crucial cross-over period – to F1’s 2022 ‘new era’ – Rossi, who has no previous F1 experience, has two senior F1 managers reporting to him, one of whom has proven himself in another universe but has no four-wheel competition know-how.

That can, of course, be learned, but it takes time – a commodity in short supply in F1. The abrupt departure of former Renault F1 Team managing director Cyril Abiteboul was described by Budkowski as “a surprise and a shock to everyone”. The word from team sources is that Budkowski and Brivio were individually under the impression they would replace Cyril; now neither does…

Budkowski admits that the structure is “a slightly different than the conventional structure, but that at the end of the day, we know the roles and the [lines of] responsibilities are clear. It’s just that we are calling [the positions] a little bit differently.”

While the two hold equal status on paper, the perception is that Budkowski is the more senior. Not only has the Polish-French engineer been with the team longer – he joined from a senior FIA technical position in 2018 – but is said by sources to be inscribed as the team’s responsible person, thus being accountable to the FIA in the event of breaches. Marcin is also listed as director of the Enstone company, whereas Brivio is not.

Nor does Budkowski intend to attend all the races: “In today’s F1 world, with the complexity of a team – especially one that does chassis and engines; we have a base in the UK and a base in France – plus there are 23 races and potentially 25 in the future, and COVID restrictions that potentially mean quarantines, managing a team and [simultaneously] going to all races is very difficult.

“For me personally it’s great to have Davide onboard – apart from all the skills he brings from his other motorsport experience, it means I won’t have to go to all the races. I will probably do the majority of [races] but will probably start skipping a few in the second part of the of the season.

“In Davide we have someone who has got a lot of trackside experience and a lot of soft skills acquired as a team manager in other categories. He knows how to manage drivers, how to motivate them, how to organise the garage.”

Brivio is open about the tough challenge he faces: “I think it’s probably harder for Moto GP [people] to go to F1, because F1 is a bigger organisation, is more complex, and [has] many more people.

“I feel a lot of similarities because it [needs] teamwork, the drivers have similar attitudes the riders, but [F1] is probably much more complex in terms of technicality – many more parameters, more problems [that] are dynamic, which you don’t have [in Moto GP].

“This is a technical job in terms of putting the team together, trying to strengthen the group. I think there are similarities, but there’s no doubt F1 is more complex than Moto GP, but they have similarities.”

One constant, though, is that Mecachrome continues to provide a range of services, including production and fabrication of major engine components and precision parts. So much for backstories, what then are Alpine’s 2021 on- and off-track targets?

“In the short term this is a transition year for everyone,” believes Rossi, “not just for us, being the end of a regulation era. Already we are gearing up building the car for [2022]. For this year the car is an improved version of last year; of course, it’s a bit different, but it’s an evolution more than a disruption in terms of design, both from the engine and chassis side.

“So, what we hope is to do at least as well as we did last year [fifth in the constructors championship], that is to be a consistent contender for podiums and fight with the best [teams] for good-to-great results.

“Behind the scenes we’re building the [2022] car, new engine, new chassis. Our objectives are pretty aggressive. In fact, Alpine is here to stay. We want to tackle the new era with high ambitions and we decisively designed our processes, our team, in order to first compete for podiums in the mid-term and then in the longer run to compete for victories.

Will he, though, be able to pull those strands to together over the next two seasons – particularly with all teams resetting to zero after this year – to “decisively achieve those hopes”? If 2021 is a period of learning while treading water and 2022 a development season, the next two could prove to be watershed years for the newly formed Alpine F1 Team – 50 years after the A500 first ran.