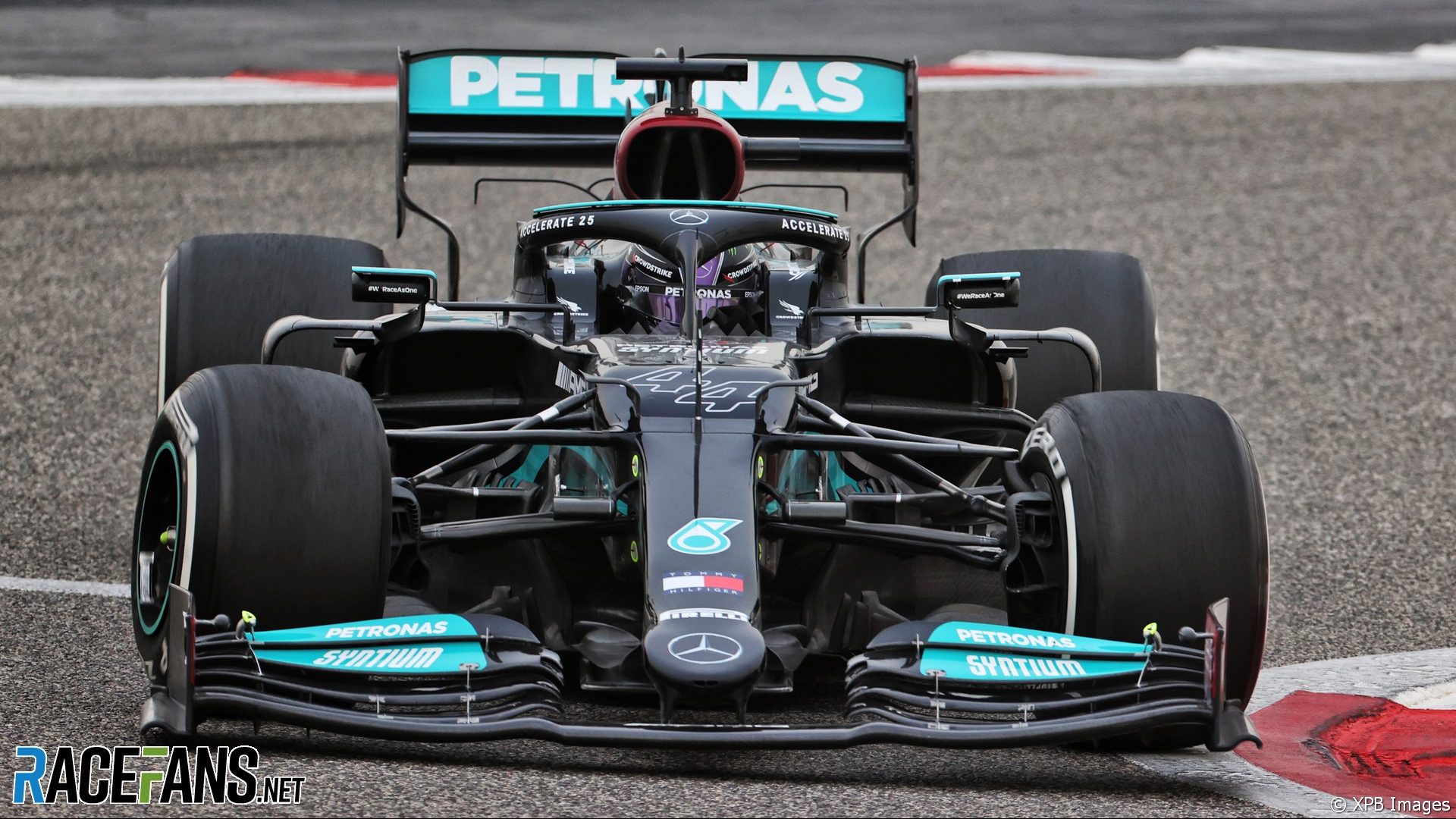 Following a disrupted first day of testing for the 2021 F1 season in Bahrain, Mercedes made it clear their limited running had been a significant setback.

Trackside engineering director Andrew Shovlin called it a “poor start to the season”. Not just because gearbox trouble confined Valtteri Bottas to a mere six laps in the morning – Lewis Hamilton wasn’t happy with the balance of his W12. “We’re quite a way behind on our test programme,” concluded Shovlin.

Mercedes always play a strong game when it comes to ‘expectations management’. No potential weakness on their part is overlooked, no strength in their rivals downplayed – even after seven consecutive championship successes. So are they really in trouble or is this all just spin?

It’s often said mileage matters more than lap time when it comes to testing. Mercedes didn’t look great by either metric today, but their tally of just 48 laps will surely cause the most concern. That’s less than a grand prix distance from eight hours of running at the home of the Bahrain Grand Prix, and the lowest total of any team.

Unlike their rivals, Mercedes opted not to do a filming day to shake down their new chassis. Doing so wouldn’t necessarily have spared them from the gearbox problem which struck Bottas on the first lap (Haas ran their VF-21 yesterday and were also delayed by transmission trouble today) but it might have.

But someone at Mercedes will be looking at a long checklist of testing jobs with nowhere near as many boxes ticked as they needed. With just three days’ running available, losing at least three hours is a significant setback.

“The programme these three days is fully-packed,” explained McLaren team principal Andreas Seidl today. “I would say the last thing you want is losing track time with an issue because it will mean that you will lose time to get through your test points.

“If it happens, you simply have to deal with it. You have to adapt. You need to prioritise in order to make sure you’ve still got the maximum amount in terms of preparation for the first race weekend. But as I said, it’s more crucial than ever before to have three smooth, solid days.”

Mercedes did not have a smooth or solid day. By the time they got on track to do some serious running, the conditions had taken a turn for the worse. Hamilton did much of his 42 laps on wind-blown and very sandy track.

He logged the team’s best lap time of the day, which was only good enough for 10th in the overall classification. No team lapped quicker today than they managed during the race weekend at this track just four months ago, but Mercedes were further away than anyone else, lapping over five-and-a-half seconds off their best.

Red Bull, who are already within three seconds of their 2020 benchmark, are clearly further down the road in opening up the performance of their new car. That’s an encouraging result for a team which has too often begun championships on the back foot in recent years.

But there is one positive sign in the times for Mercedes as well. The team which is in the best position in terms of relative performance is McLaren, who swapped their Renault power unit for a Mercedes during the off-season. They were only 2.3 seconds off their 2020 Bahrain pace today. That’s good for them, and gives Mercedes cause to feel confident about the strength of their power unit.

In recent years Mercedes have developed a reputation for relentlessly cranking out huge mileages during tests. Seeing them at the bottom of the mileage table is highly unusual. It may not be a cause for alarm just yet, but as CEO Toto Wolff acknowledged today, with just two days of testing left, they need to avoid any further “stumbling blocks” over the weekend.

9 comments on “Fewest laps, least progress, but was Mercedes’ start to testing really that bad?”