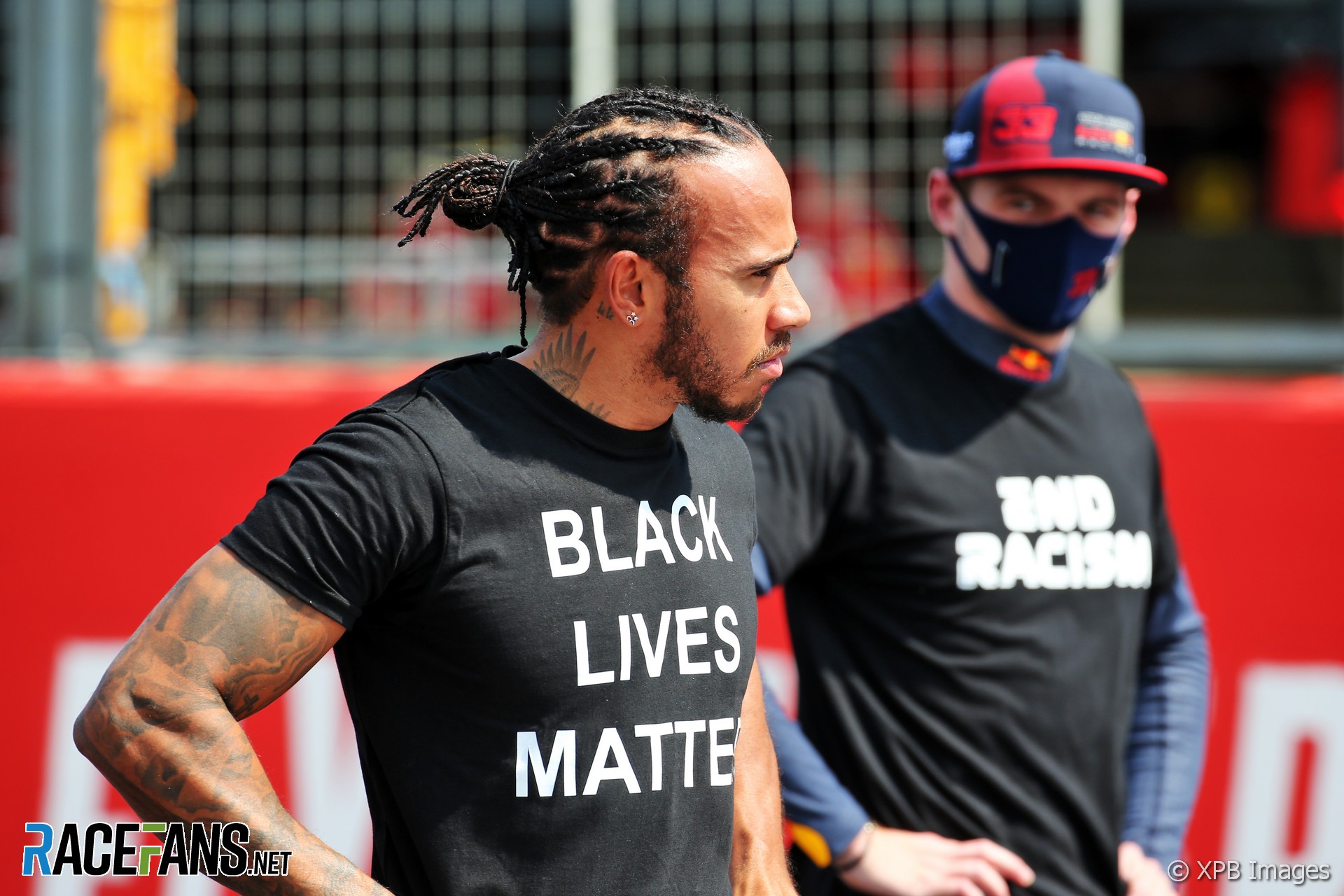 In the round-up: Lewis Hamilton says he is pleased by what he heard from new Formula 1 CEO Stefano Domenicali on the sport’s plans to improve diversity in the sport.

Hamilton was asked what came out of the discussion Domenicali had with drivers ahead of the Bahrain test about their plans for the ‘WeRaceAsOne’ campaign following its launch last year.

It was a really good meeting. I think it’s a really great first step that Stefano’s taking the time to sit with us all and be open in terms of having this discussion of how we can work together to improve the sport.

We didn’t necessarily have much of a discussion about it. They explained to us their sort of plans and we can go back to them. There wasn’t anything that had to be done there on the spot. They are making some adjustments which I think are positive.

Charles Leclerc: "We have to be realistic: even if I hope so, I don't think we will fight for the 2021 world championship."

"I don't believe anything about Mercedes or what I see from the other teams. It is still too early."

"Bahrain International Circuit (BIC) and Formula 1 have collaborated to give children under 13, who are residents of Bahrain, the opportunity to ask a question to an F1 driver during a global broadcast press conference!"

"The FIA has joined the World Touring Car community in paying tribute to Sabine Schmitz, who has passed away aged 51."

‘I felt awful as a father’: Sutton reveals stress as a parent during Victoria’s Covid-19 second wave (The Age)

"Professor Sutton said he started daily coronavirus briefings in February last year as the virus raced across Italy, but cites the cancellation of the Australian Grand Prix as the first major decision he made, saying it provided a template to restrict mass gatherings as the pandemic worsened. He said it was the first of many unpopular decisions."

Fuelled And Ready For 2021 With ExxonMobil (Red Bull)

"The Synergy Race Fuel was developed in close collaboration with the team’s power unit supplier, Honda, together with Red Bull engineers, and it focuses on delivering improved power, performance and protection."

Damon Hill: "(I was on a) speed awareness course. So we were all naughty and we were all sitting in the room and we had explained to us the error of our ways and thinking. And I'm 100% in support of what they're doing. But we were told 'obviously some people here might not want anyone else to know that they've broken the law and are in trouble'. So we're going to put name tags, but you can put whatever name you like on the thing and we'll just call you that name. So I couldn't help, but I put 'The Champ', which was probably a bit cheeky... "

Charaf was such an amazing person. You always had a huge smile on your face every time we spoke together. Always so positive and always using the right words whenever I was feeling down. I’ll miss you, and the whole paddock will miss you.
Rest In Peace my friend ❤️ pic.twitter.com/P1fAp7D7Qb

If only everything in life was as simple as the notes left behind for James Hunt by his mechanics back in the day. ✍️😅 pic.twitter.com/ExSpSmSMRO

25 years ago today Mark Blundell survived this terrifying crash at the Rio de Janeiro oval when his brakes failed. He tried to hit team mate Mauricio Gugelmin to lessen the impact, but missed, and struck the wall with a force of 120G, fracturing a heel and a vertebra.#IndyCar pic.twitter.com/JOMTJD4TFL

How will Perez stack up against Verstappen this year?

It’s a weird situation because if he’s on par with Verstappen it heavily devalues Verstappen’s stock and bargaining prowess in future negotiations. If he gets blown away by Verstappen in a similar fashion to Albon and Gasly then people who are Verstappen detractors will claim Perez was never all that to begin with. I don’t think he has anything to lose and unless he’s embarrassed by Verstappen it will not hurt his career to be beaten anyway.

I personally think he’ll be closer to Verstappen and faster in some races this year which will benefit the team but Verstappen will still have the legs on him overall by a comfortable margin for the most part. Perez always seems to have a race or two each year though where he’s untouchable not too dissimilar to Button to be fair. When everything is right for that sort of driver they’re almost unbeatable on their day. They just don’t have as many of those days as some of the very best drivers in history.

I think he’s also a great driver for Verstappen to have alongside as I genuinely think there might be some things he can learn from Perez to improve himself further. I think Hamilton was very lucky to have raced alongside Alonso, Button and Rosberg in his career as he learned some important lessons from each of those drivers. Verstappen has had nothing to learn from Gasly and Albon for 2 years.

Should be a great story for the year to watch how he gets on. I’d love a Perez win first time out ala Button in 2010 just to add some spice for the year.
@Slowmo