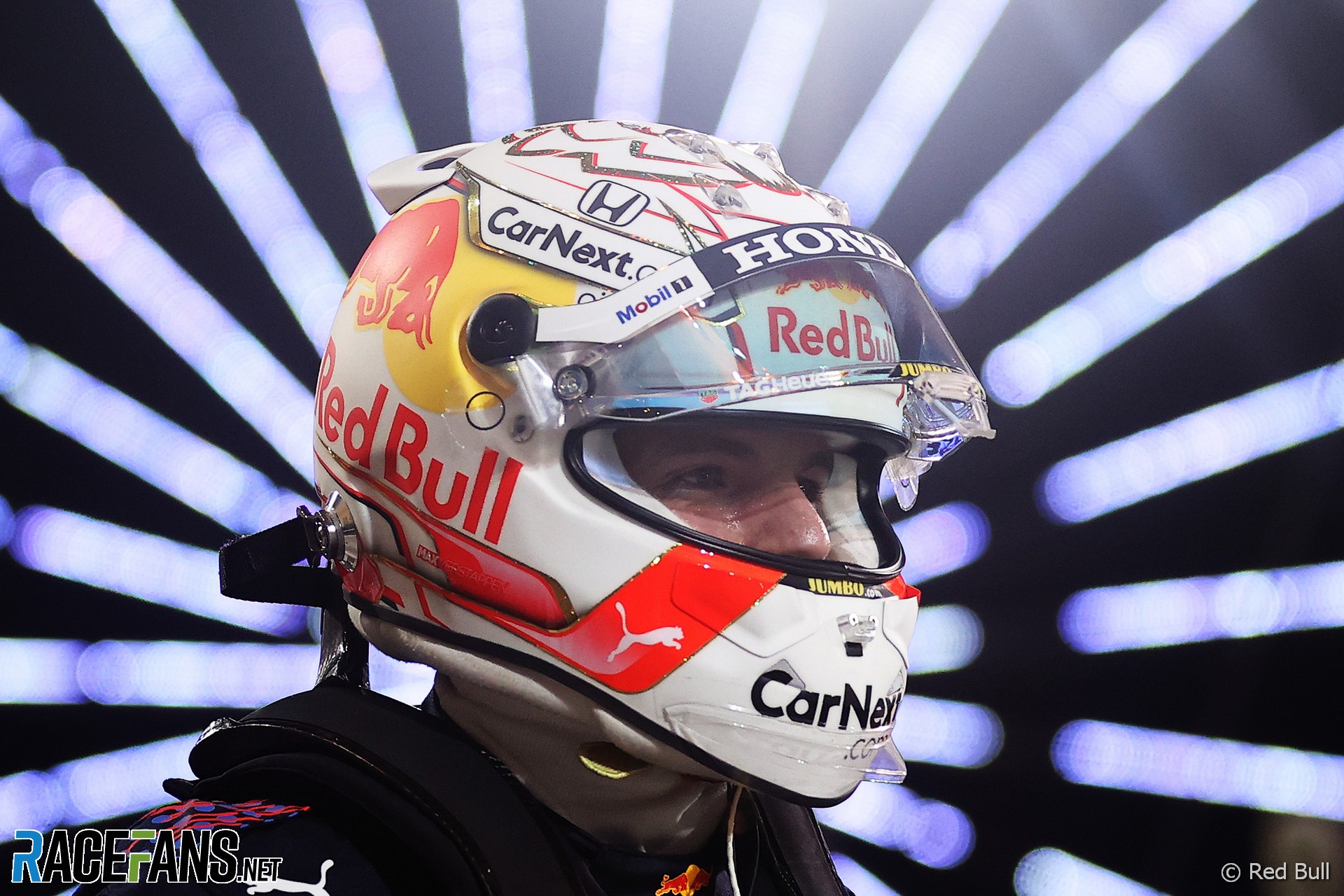 Max Verstappen beat the Mercedes pair to pole position for the first race of the 2021 F1 season, despite picking up damage on his Red Bull early in the qualifying session.

Behind Lewis Hamilton and Valtteri Bottas, Charles Leclerc gave Ferrari an encouraging start to their season by lining up fourth.

However it was a disappointing start to life at Aston Martin for Sebastian Vettel, who was eliminated in the first round of qualifying.

The first qualifying session of the year got off to a quiet start after darkness fell and the lights came on in Bahrain. George Russell was one of the first to take to the track, but returned to the pits without setting a time. Nikita Mazepin didn’t complete his first run after spinning again, having done so in final practice earlier in the day.

Halfway through the 18-minute session, the field took to the track en masse. Verstappen quickly reasserted his status as pace-setter from practice, though he scraped his RB16B down the apex kerb at turn two, leaving pieces of his floor behind.

Lewis Hamilton initially took up second place behind him, just 0.118 seconds shy, considerably closer than he had been earlier in the day. But he – and much of the watching field – were surprised to see himself bumped back rookie Yuki Tsunoda, who beat the world champion by a hundredth of a second in his AlphaTauri.

Practice had suggested the Haas and Williams pair would struggle to escape Q1, and sure enough their four cars appeared at the bottom of the times sheets. Esteban Ocon was also in the drop zone as the final runs began, but only a hundredth of a second shy of Antonio Giovinazzi’s Alfa Romeo. The whole field headed out for further runs at the end, bar Verstappen and the AlphaTauri pair.

Russell leapt up to seventh with his final effort, but improvements by other drivers relegated him to 13th place. He might have fallen further, but a second spin by Mazepin prevented at least one driver, Sebastian Vettel from improving his time. The Haas driver lost his car at turn one, obliging Vettel to back off, and he lost more time when he encountered his Ferrari replacement Carlos Sainz Jnr at turn eight, who had suffered a loss of power.

Those disruptions meant Vettel was unable to improve on his 18th-fastest time, and was eliminated from qualifying on his first appearance for Aston Martin. He joined Latifi, Ocon and the Haas drivers in dropping out in the first round.

The Red Bull, Mercedes and AlphaTauri drivers all opted for the medium tyre compound at the start of Q2, preferring to start the race on the harder compound. Hamilton seemed happier on these tyres and moved to the top of the times, 0.233s ahead of Verstappen, and quicker than the Red Bull driver had been in Q1.

Sergio Perez suffered a setback as his first lap time was deleted for exceeding track limits at turn four. However he returned to the track on another set of medium tyres, determined to make the cut without sacrificing a tactical advantage on Sunday.

Daniel Ricciardo, who committed the same infringement as Perez, Russell and the Alfa Romeo pair went into the final minutes of Q2 in the drop zone.

Perez’s bold decision initially appeared to pay off. He lapped three-tenths of a second off Verstappen and initially set the sixth-quickest time. But a string of improvements were to follow.

The Ferrari pair finally revealed their true pace and hit the top of the times, newcomer Sainz pipping Charles Leclerc by one-thousandth of a second to lead Q2 with a time of 1’30.009. The soft-tyred pair led Hamilton on mediums, followed by Lando Norris in the first of the soft-shod McLarens, and their respective team mates on the same compounds.

That left Verstappen seventh ahead of Pierre Gasly’s AlphaTauri. However neither of the other two Honda-powered cars made it through. Tsunoda was a disappointed 13th following his earlier heroics, and Perez was the last driver out by a mere three-hundredths of a second. He was denied a place in the final 10 by Stroll and Fernando Alonso, who left their respective team mates behind in Q1.

The contest between Hamilton and Verstappen finally came into focus as the drivers tipped to fight over the 2021 title set their first flying laps in a pole position shoot-out this year. Hamilton’s first effort looked highly promising for Mercedes – a 1’29.549. But Verstappen, running after him, found fractionally more time, provisionally claiming the top spot by 23 thousandths of a second.

Gasly put his AlphaTauri third, almost half a second slower than Verstappen, but surprisingly clear of Bottas in the second Mercedes. Sainz led the Ferrari charge as Leclerc didn’t set a time initially.

Hamilton and Verstappen exchanged blows again on their final runs. Hamilton found more time, taking almost two-tenths of a second off his previous best, lowering it to a 1’29.385.

But Verstappen, again lapping behind the Mercedes driver, was flying once more. The Red Bull was dramatically quicker through the middle of the lap, and at the line increased his advantage over the Mercedes to almost four-tenths of a second.

Gasly couldn’t hold on to third place – he slipped behind Bottas and Leclerc, who pulled out a superb lap in his Ferrari to take a place on the second row of the grid. Daniel Ricciardo will start his first race as a McLaren driver ahead of team mate Lando Norris.

Sainz fell to eighth ahead of Alonso, with Stroll rounding off the top 10 in his Aston Martin.