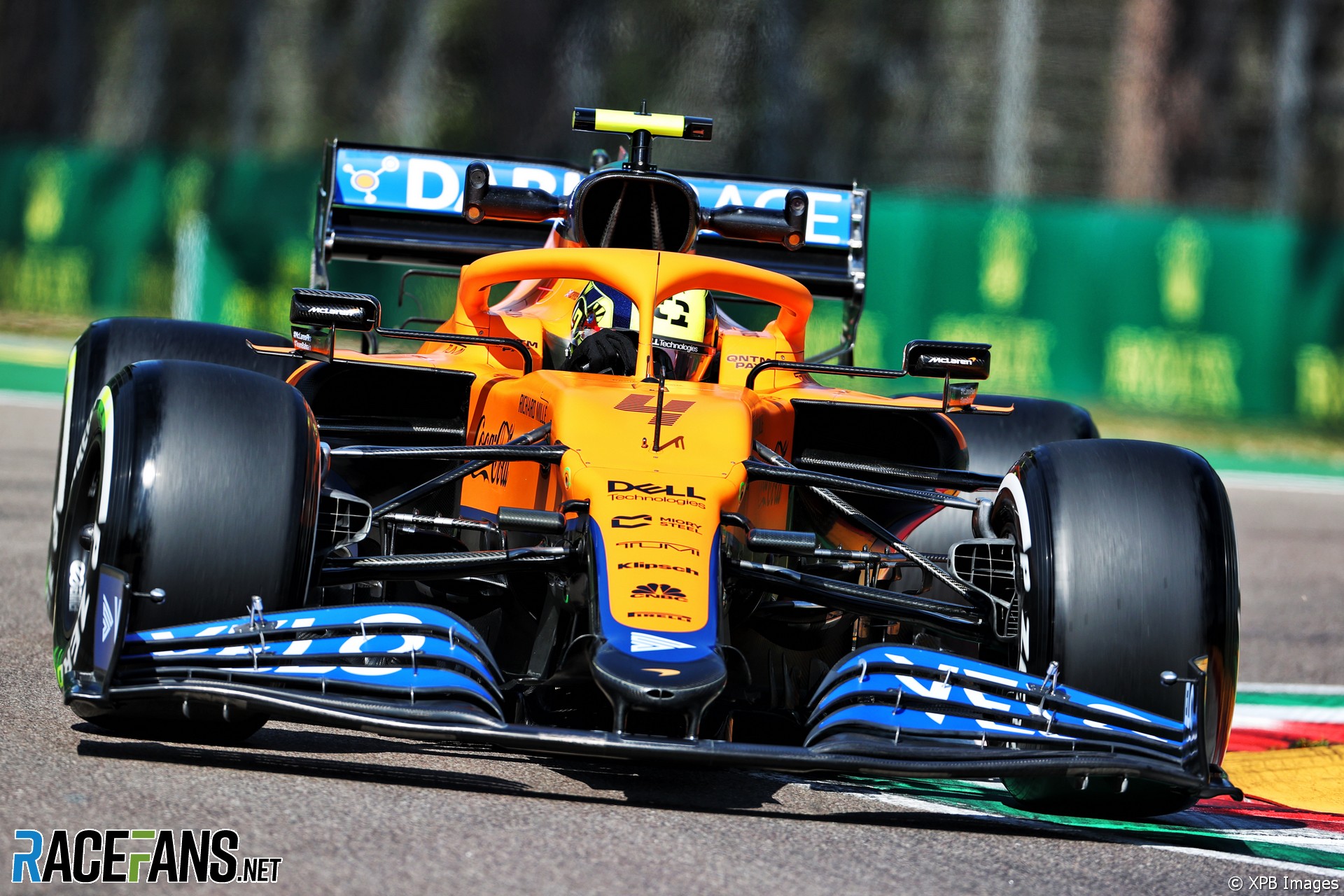 Lando Norris says he missed out on a third-place start for tomorrow’s Emilia-Romagna Grand Prix by centimetres after his best lap time in Q3 was deleted for a track limits infringement.

The McLaren driver was on course to equal the best starting position of his career when he posted a 1’14.454 in the dying seconds of qualifying. The time, four hundredths of a second slower than Lewis Hamilton pole-winning lap, put him provisionally second on the grid, though Sergio Perez later beat it.

But Norris’s time did not stand. It was deleted after he was observed to have exceeded track limits at the exit of Piratella. The loss of his best lap time left Norris seventh on the grid, behind team mate Daniel Ricciardo.

Norris says he was “surprised” to learn he had infringed the track limits during his final flying lap, and that the margin of difference came down to a matter of centimetres.

“I didn’t think it was too different to the laps I did previously,” said Norris. “I think I was always close to the limit. I didn’t think of it when I was doing my lap or anything. So it was a bit of a surprise.

“But I think the reason is because all my other laps were very close and were very similar, obviously just a few centimetres further left. But when you’re driving the car, you don’t really feel those couple of centimetres all the time. So that’s why it didn’t feel too different.”

Norris was in good company. Mick Schumacher, Antonio Giovinazzi, Lance Stroll, Pierre Gasly and Sergio Perez all had lap times deleted for running too wide on the exit of the high-speed kink at Piratella.

“I think the faster corner, the trickier it is to guess,” said Norris. “It’s quite a narrow track. You’re committing to your turn-in. It’s not like you can start to edge in and have a few attempts at it.

“It’s quite a big inside kerb, so I didn’t have much room to kind of play with the inside kerb. You’re on a very particular line and you just go that little bit quicker, then you can end up a couple of centimetres wider.

“The thing that’s hard to judge is that it happens so quickly – it’s not easy to get to an apex and then go ‘okay, I know I’m going to be ending up three centimetres further right’. So it’s a very difficult corner. I think in terms of this track, it’s probably one of the hardest to judge exactly where you’re going to end up.

“It probably looks easy when you’re watching. I think we make it look easier than it is. But judging centimetres and inches and stuff like that, it’s much trickier than it looks.”