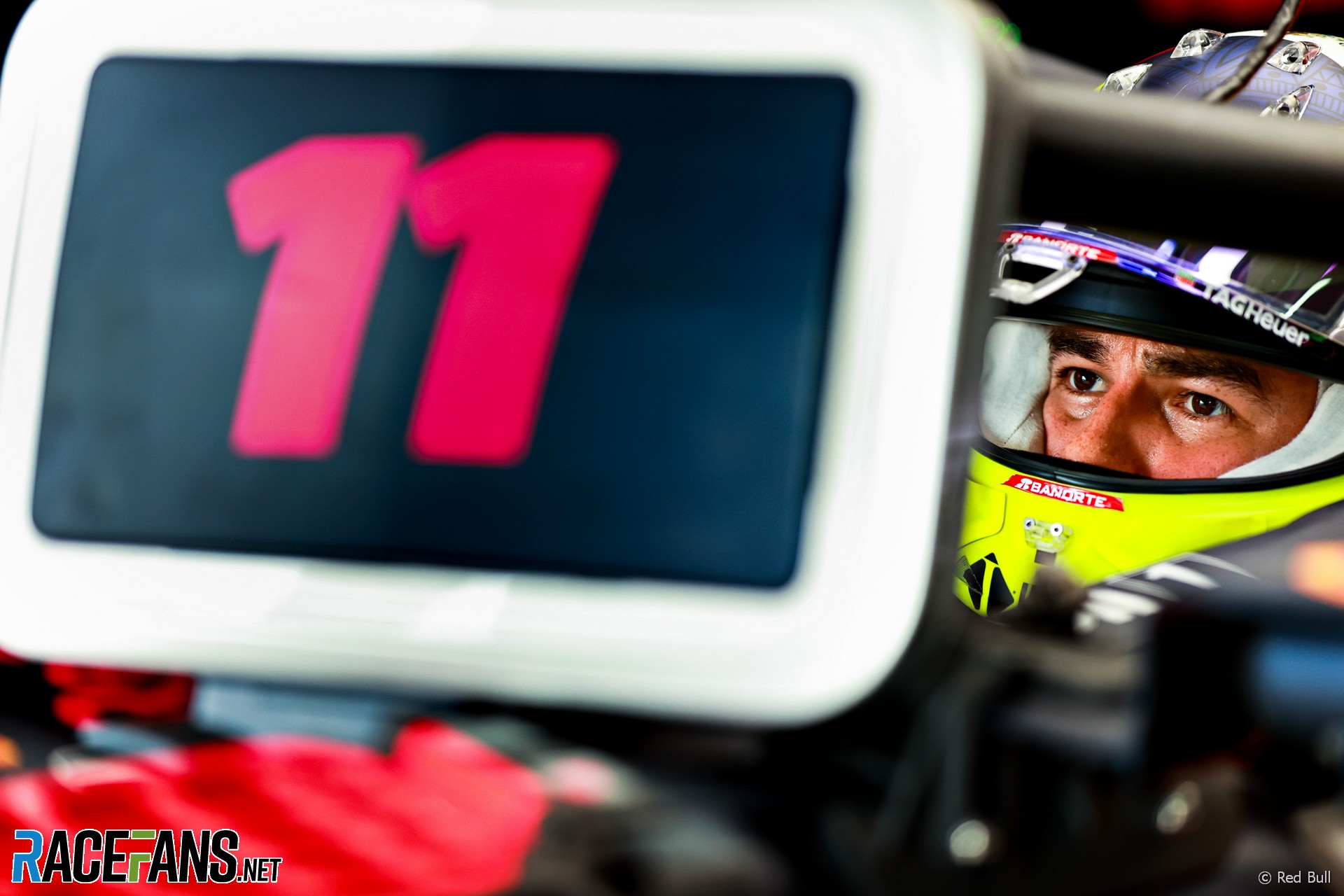 There’s very much a sense that “anything can happen” in the Emilia-Romagna Grand Prix on Sunday – even if it doesn’t rain.

One of those outcomes could quite realistically be a victory for Red Bull – and not the driver who’s done all of their winning for the past two seasons.

Sergio Perez claimed the first front row start of his Formula 1 career in qualifying, and will start on Pirelli’s soft compound tyre. The cars to the left of him on the grid, one just ahead and the other just behind, will both be on the more durable medium tyre generally considered the more tactically sound compound to start on.

Perez, who became a grand prix winner just three races ago, is well aware he’s got a big challenge ahead of him.

“If there is a place that you don’t want to come in your second race with a new team, it’s probably Imola,” he said after qualifying. But then he added: “I think we have a fantastic car for the race.”

His team mate Max Verstappen can’t say the same from third on the grid, as a driveshaft problem stopped him from doing long runs in practice on Friday. But he doesn’t think that “will be a big issue”, particularly after rivalling Emilia-Romagna Grand Prix pole-winner Lewis Hamilton all the way to the chequered flag in last month’s Bahrain Grand Prix.

“We have two cars close to Lewis on different tyres. So hopefully that will give some excitement tomorrow,” Verstappen said.

An off-track moment early in his Q3 lap hurt Verstappen’s grid placing, ending his long streak of out-qualifying his team mates, and putting him behind two cars that are at least as quick as his on a track where it’s difficult to overtake.

Mercedes team principal Toto Wolff was sure Verstappen had a pace advantage in qualifying on the soft tyre which would should have assured him of pole position. But as the driver in first place observed, “we could all go back and look at our data and say we could go faster – at the end of the day, it’s what you do in that one moment that counts.”

Look into the data and it suggests that Hamilton has the advantage over Verstappen on the medium compound over one lap. Verstappen’s driveshaft fault in second practice means there is little comparative data for long runs to suggest which of the two will be quicker in the race. Then there’s Perez, who wasn’t sure he could make it to Q3 on the medium and had to use the soft, hence it’s his starting tyre.

Pirelli and the teams’ estimations on the gap in performance between those two compounds have been revised several times during the weekend, but there’s a consensus now that the more durable tyre isn’t necessarily going to give an immediate advantage if the race takes place in fairly cool conditions.

It may warm up quicker, as most drivers took at least two laps on qualifying runs to get the soft into its performance window, but there’s nothing to suggest it will last longer – not least when attached to the car of renowned tyre-whisperer Perez.

“We felt as a team that the soft is nowhere near what it was last year,” explained Perez. “So it’s a good race tyre. It’s just different to the medium, and it was very important and crucial for me to get that learning, that consistency and that progression [by using it in Q2].”

Pirelli’s F1 tyre chief Mario Isola expects little graining of the soft tyres, and also thought “the medium is working quite well for Mercedes” on Friday when rear tyres were running at a 19psi starting pressure. That was then raised to 20psi, which will change the feel for the drivers if not the lap times.

In this case, Perez doesn’t necessarily have to be ahead of Hamilton in the first stint of the race. As long as he can keep pace, he can pick up even more experience of the compound and gather data on it prior to his main rivals for victory switching over to it, and if Red Bull decides for a two-stop strategy then he will have a clear pace advantage with a switch back to softs for his final stint.

Hamilton is well aware of the strategy freedom Red Bull may have over Mercedes, particularly as his own team mate Valtteri Bottas only qualified sixth after an issue warming up his softs in Q3, but says there’s more to the race if he leads the field through the opening laps.

“I think tomorrow, they have these, I mean if we’re able to get off in order, then they obviously have a bit of a better set of cards in terms of strategy,” he said. “But that doesn’t mean we can’t pull out something unique and do something different.

“I’m not really sure what happened with Valtteri, it’s very hard to overtake here. So probably won’t have the support of him early on, but nonetheless, maybe he’ll make it through. But otherwise we just got to focus on our job and and try to do absolutely everything and more to keep these guys behind.”

Drivers further down the order are convinced it will be a one-stop race unless it rains, and Alpine’s Esteban Ocon foresees a big gap from his ninth place on the grid to the cars ahead after getting the “maximum” out of his machinery in qualifying. That could either lead to a train of cars behind him or a race-long battle for the lower points. Ocon’s admission could also give Mercedes and Red Bull a marker for pit stop timing to avoid traffic.

Ferrari’s Carlos Sainz Jnr is the first of the drivers beginning the race on fresh rubber as a result of not reaching Q3. His race pace in Bahrain was strong, particularly later on, and Ferrari look like they have the pace to be further up the order – even if team mate Charles Leclerc has said he’s unsure where they really stand in the pecking order at Imola.

Will Perez beat Verstappen to a first win of 2021, is the soft tyre as close to the pace of the medium as Red Bull expects, can Bottas recover from his dissapointing Q3 result and will the two-stop strategy be attempted by anyone?

Share your views on the Emilia-Romagna Grand Prix in the comments.

27 comments on “Will Perez beat Verstappen to Red Bull’s first 2021 win at Imola?”