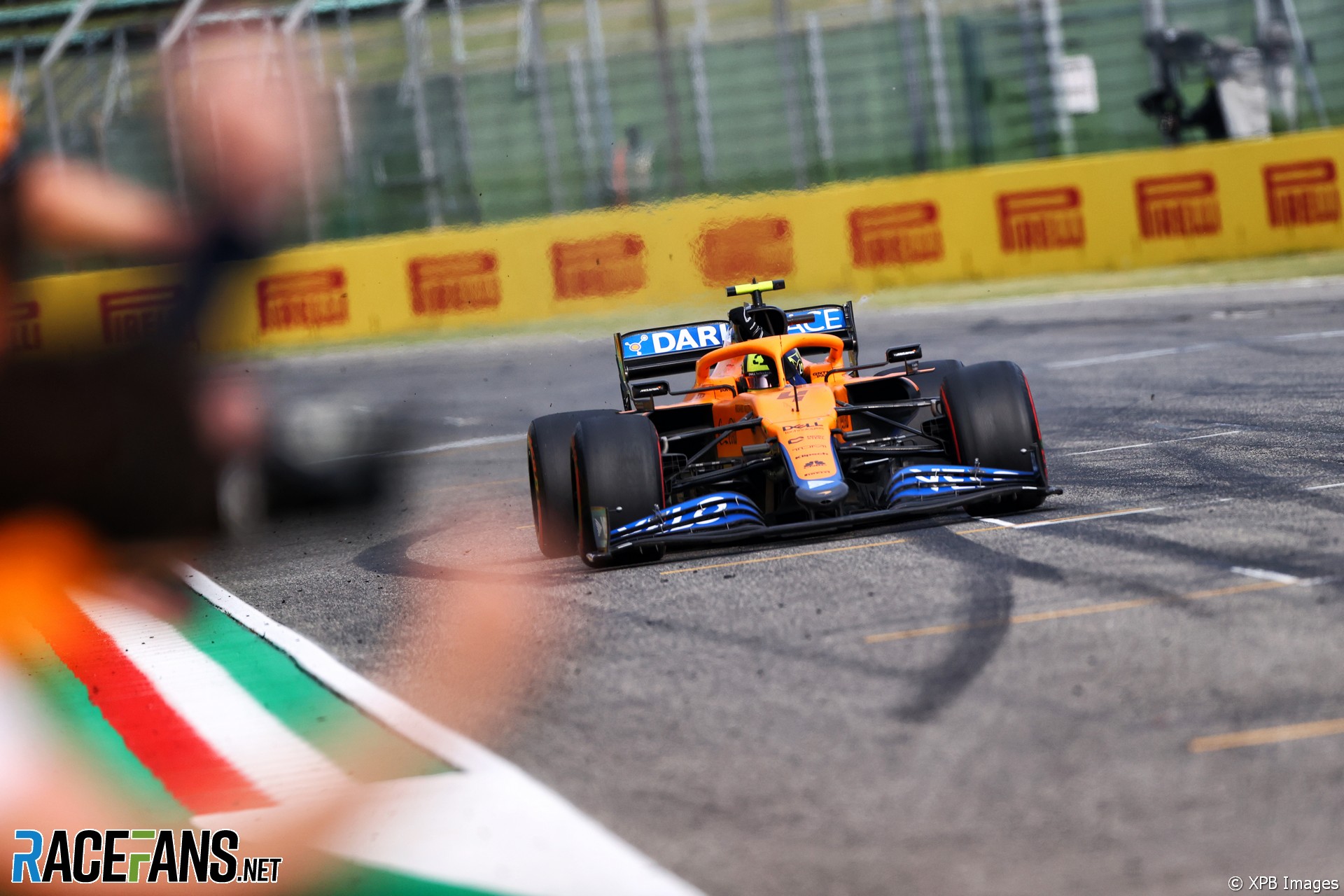 Lando Norris said his performance at Imola had been almost perfect, after recovering from a disappointment in qualifying to finish third.

The McLaren driver lost a potential third place on the grid when he had his quickest lap time deleted for exceeding track limits during Q3. That left him seventh on the grid, but he worked his way forwards to claim a podium finish.

“On the whole I’m very pleased with myself, but [also] the team as well,” said Norris. “I think apart from Q3, it was a pretty perfect weekend, I want to say. We improved the car a lot over the first couple of days from Friday into Saturday and through the sessions and so on. We didn’t start on the best foot but we improved a lot.

“I feel like I did a very good job in qualifying, it was the first time I only had to do one run in both Q1 and Q2. So I did good enough laps to save the tyres, give myself a good opportunity into Q3 and be pretty close to pole position and then almost P3 and then get down to P7. So was near-perfect from my side and the team’s, I think we did a very good job.

“I was disappointed yesterday so to come back to third today after a pretty eventful race for myself and I’m sure the others as well was rewarding for myself, but more importantly, the team.”

Norris held second in the closing stages of the race, but was passed by Lewis Hamilton with three laps to go. He said the team’s decision to switch to soft tyres during the Safety Car paid off, despite being unable to keep the Mercedes behind.

“It was tough,” said Norris. “We made the decision to go on the softs. I wasn’t so confident to get the tyres working [and] it’s not an easy track to overtake on. Lewis might say otherwise.

“But it was, I think, the right decision. Apart from Max’s little moment, I thought Charles [Leclerc] was going to drive ahead of Max on the restart as he was off-track. [He] didn’t take advantage of that but he had a lot of wheelspin on the restart when Max went and that’s the fault of the mediums and their decision.

“So we made a decision to go on the softs. I got a good launch, good restart and got ahead of him. I pretty much started saving the tyres from lap one after the restart, knowing that the last couple of laps were going to be pretty tough. And they were, especially with Lewis at the end.

“A lot of focus is the last couple of corners, getting the deployment right, using the battery in the right way. So I was trying to save up as much as possible. But in the end I didn’t have enough rear tyre out of the last two corners and the chicane to hold him behind. But I tried.

“It was a nice little battle. It’s nice to be racing unusual cars, I guess, for us – a Red Bull, a Mercedes and Ferraris, things like that. It’s nice to be going up against them so hopefully we can have some of that in the future.”

17 comments on “Norris thrilled by ‘perfect weekend, apart from Q3’”