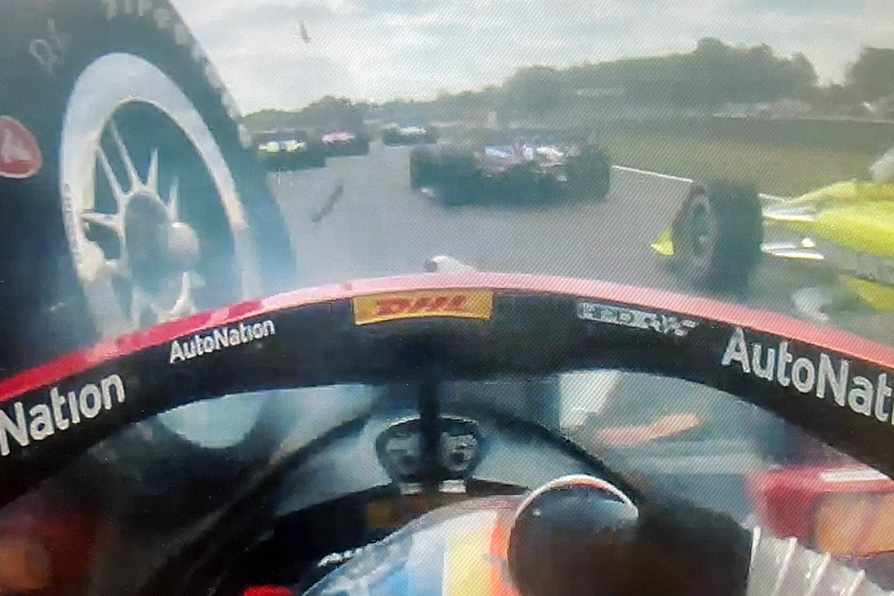 Ryan Hunter-Reay believes IndyCar’s Aeroscreen saved him from serious injury in the huge crash which occured at the start of yesterday’s race at Barber Motorsport Park.

The Andretti driver struck the Penske car of Josef Newgarden when his rival spun in front of him at the start of the race. Footage from Hunter-Reay’s onboard camera showed his screen was struck by Newgarden’s front-right wheel.

“That was a race weekend to forget,” said Hunter-Reay on social media. “We struggled [with] drivetrain – straight line speed – issues through practice and qualifying.

“Then our race ended before it really started, taken out in [the] first-lap pile-up. Extremely grateful for the IndyCar Aeroscreen. Likely saved my life.”

The Aeroscreen, which was developed by Red Bull Advanced Technologies, was introduced to IndyCar last year. The polycarbonate screen is designed to provide added protection to drivers. It is based on a design which was trialled in Formula 1 five years ago, before the Halo was introduced.

The first-lap crash ended Hunter-Reay and Newgarden’s races on the spot. Several other drivers suffered badly damaged cars and were only able to resume after extensive repairs.

Hunter-Reay described how the crash unfolded at the exit of turn four: “I was able to make a pass on VeeKay and I came up to the top of the hill,” he said. “I saw somebody dropped a wheel all of a sudden as I was coming up to Pagenaud, Newgarden came across the track.

“I spoke with him, he said he just lost it in dirty air. It’s unfortunate.”

Newgarden apologised to his rivals for causing the crash. “I got loose coming over the hill,” he explained.

“I feel really bad for anyone that got involved in that. Obviously, my mess created a bigger mess. Any of the cars that got involved, I’m real sorry because it was obviously us that tipped it off.”