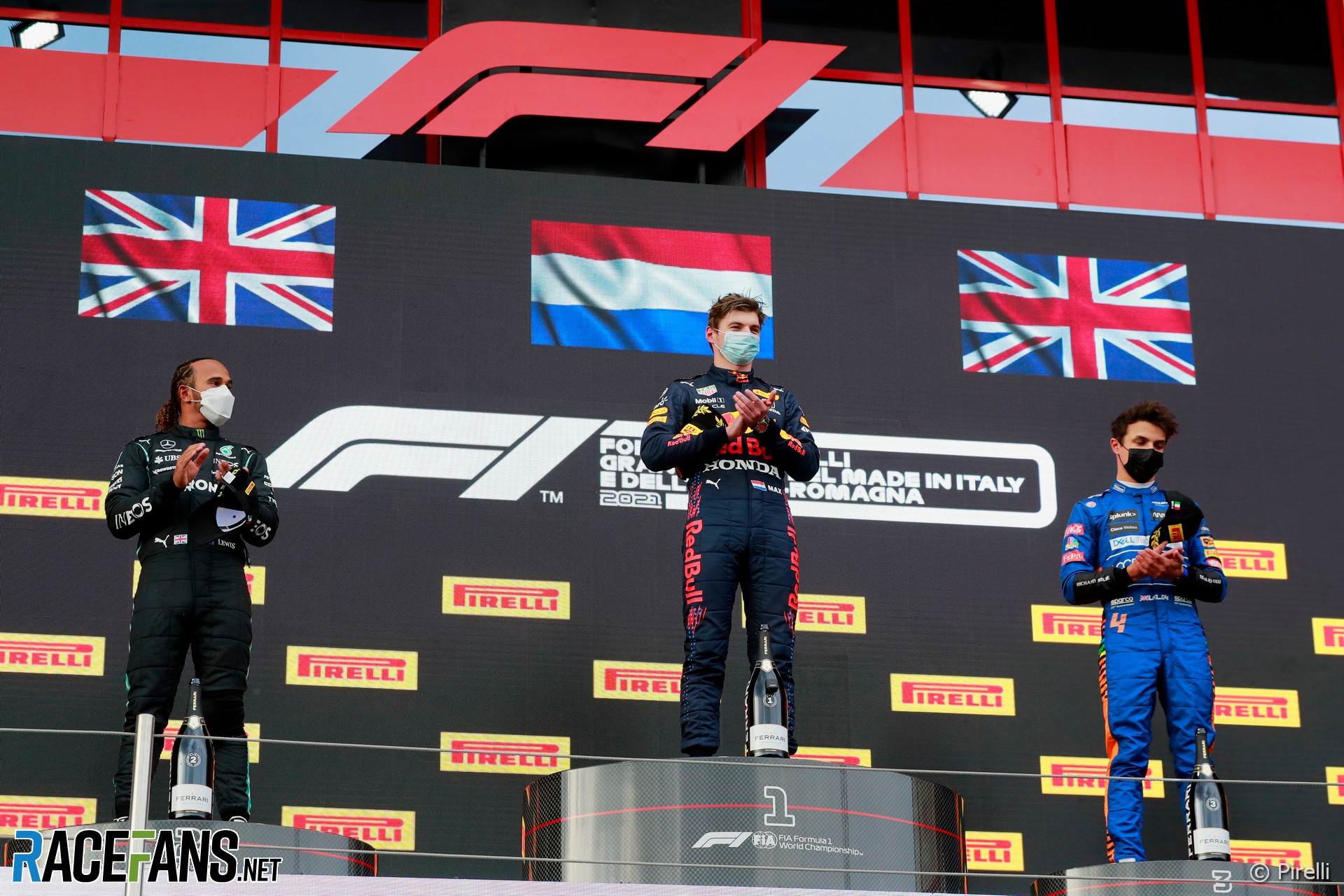 Sunday’s Emilia-Romagna Grand Prix was the first time in nine years that two British drivers had appeared on the podium.

But, just as was the case the last time it happened, neither of them won the race.

Max Verstappen’s victory at Imola was the 11th of his career. He’s now won as many races as Jacques Villeneuve, Rubens Barrichello and Felipe Massa

There were a couple of neat historical symmetries here. He gave Honda their first victory at Imola since Ayrton Senna 30 years earlier, and did it by bursting into the lead from third on the grid, exactly as Ralf Schumacher did in the same race 20 years ago.

Lewis Hamilton took second, which was remarkable, as he’d fallen a lap behind at one stage. He moved into the place with four laps to go by passing Lando Norris, who took third place and the second podium finish of his career.

This was therefore the first time two British drivers were classified in the top three since Hamilton and then-McLaren-team mate Jenson Button followed Nico Rosberg home in the 2012 Chinese Grand Prix.

That occasion was the 552nd and 553rd podium appearances by British drivers. Hamilton and Norris pushed the total up to 700 on Sunday. Norris’s podiums were two of only seven scored by drivers other than Hamilton during that time: The rest were taken by Button.

Hamilton set pole position for the 99th time in his career on Saturday. This, astute mathematicians will note, means he can reach a century at the next race in Portugal, where he broke Michael Schumacher’s record for most grand prix wins last year. Hamilton has now taken pole in 15 consecutive seasons (he already held the record) and at 30 different tracks (ditto).

He also set the fastest lap of the race, for the 54th time in his career. Schumacher is still far and away the benchmark here: He racked up 77.

Speaking of 77, Valtteri Bottas’s retirement meant that Mercedes were unusually out-scored by three of their rivals at Imola. Hamilton’s fastest lap bonus meant they came away with 19 points to Red Bull’s 25, McLaren’s 23 and Ferrari’s 22.

After the first two races, two teams have scored points with both cars in each – McLaren and Ferrari – but neither of those have won races. Three teams are yet to score at all: Williams, Haas and Alfa Romeo.

The latter lost their first points score of the season yesterday when Kimi Raikkonen was given a 10-second stop-go penalty (converted post-race into a 30-second time penalty). Vettel was given the same penalty, as Aston Martin did not fit his tyres to the car before the five-minute signal.

The 10-second stop-go penalty is not frequently issued. Last year it only appeared at Monza, where the stewards handed it to Hamilton and Antonio Giovinazzi. Prior to that its last appearance had also been at Monza where, coincidentally, the two recipients were Raikkonen and Vettel. In fact, Raikkonen has received this penalty in four of the last 13 occasions it was issued.

The post-race penalties also meant Fernando Alonso scored his first point since he returned to F1. His last points finish was seventh place at the 2018 Singapore Grand Prix.