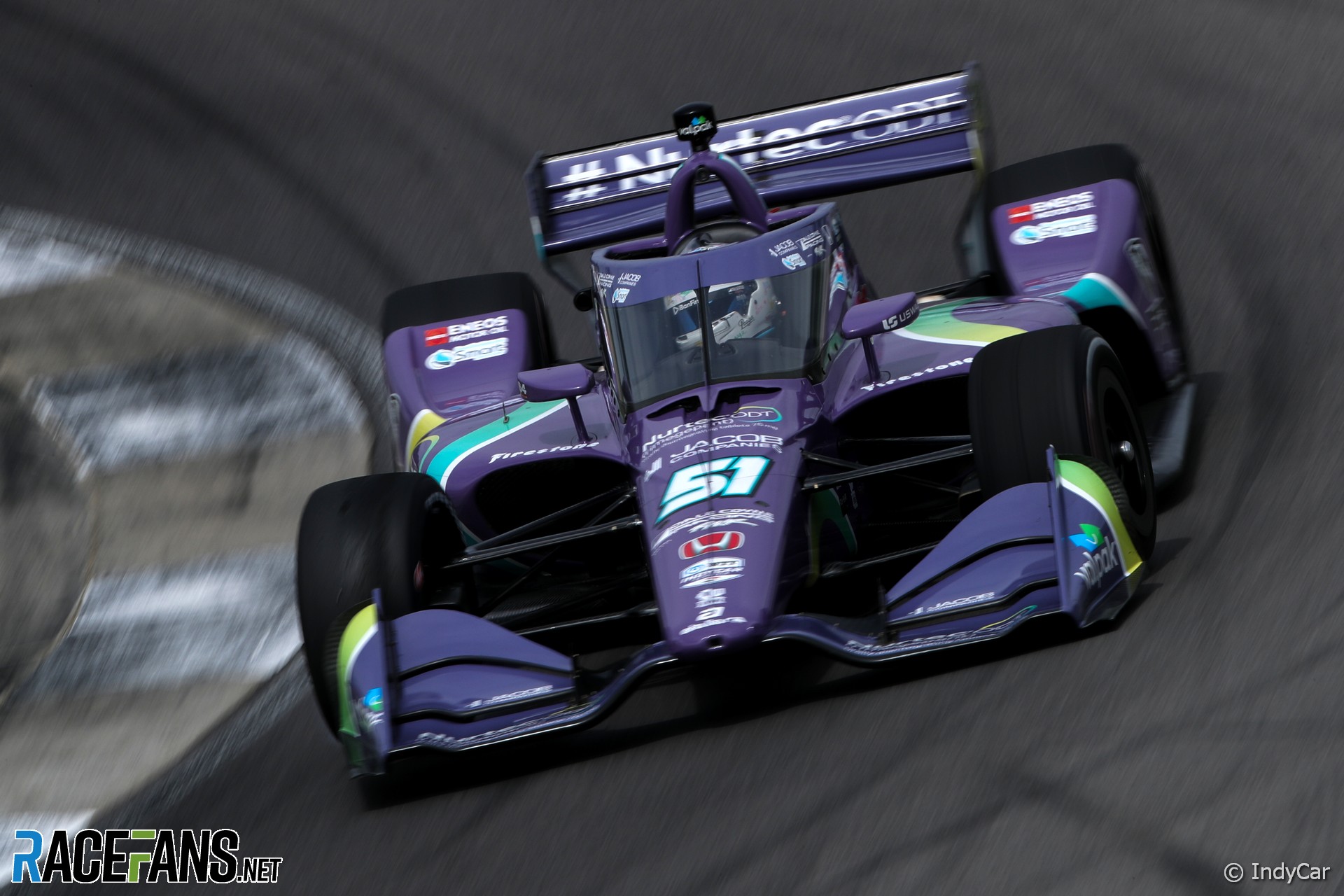 In the round-up: Romain Grosjean says he needs more practice with rolling starts after slipping from seventh on the grid to 10th at the finish in his first IndyCar race.

“I got caught a little bit,” admitted the Coyne/Rick Ware driver. “I just need to get used to it. It’s not easy, you need to get the right timing, but it was fun.”

Grosjean started seventh ahead of Josef Newgarden. The Penske driver immediately passed him at the start, then ran wide at turn four. While Grosjean dodged the spinning Newgarden, several other drivers collected him, triggering a huge crash (video below).

Following the restart Grosjean briefly ran as high as third, after other drivers in front of him pitted. He slipped to 10th place at the chequered flag – better than all bar one of his F1 finishes at Haas last year.

“First race in IndyCar, first top 10 so we can be very happy with that,” he summarised. “We fought at the front for some time and we did our best so a lot that we learned today.

“We can be very proud of our weekend. P7 in quali, P10 in the race. We’ve learned a lot and I guess we move on to St Pete and we try to do better.”

Stunning machine this is!! Very thankful to be back with @DRRIndyCar for this years Indy 500! New colors as well with @AESIndiana really excited to have them riding along! @500Festival @mecum @omaze @WIXFilters @JusticeBrosInc @hurcousa @TeamChevy @IndyCar pic.twitter.com/JB3bCk2443

For the second time in three days, @LewisHamilton is speaking up on social media for one of his fellow racers. Today it's @GeorgeRussell63…#F1 #ImolaGP pic.twitter.com/gAIQDZlmKN

If there’s a guy I’m happy to see win when we can’t it’s @AlexPalou ✌🏻 Such a great driver and very nice guy! Congrats man!

"As an Aussie, I naturally gravitated towards (Mark Webber). He was the only Australian driver on the grid at the time, so as well as being my manager, he has been an influence on my career in other ways as well, for much longer."

Colombo hoping to get up to speed quickly with Campos (F3)

"The biggest step will be understanding and managing the tyres, having come from Formula Renault on Hankook. I never had any problems with degradation or overheating on those though, so I hope that can help me in F3. My engineer also told me that the level of pushing is still quite high in this category and that the degradation isn't quite as big as it is in F2."

"Ferrari will build a full EV, and – according to Elkann – it’ll be “everything you dream the engineers and designers at Maranello can imagine for such a landmark in our history”."

Is Fernando Alonso having a harder time than expected on his return to F1?

I honestly expected Alonso to struggle on his return. We saw Ocon struggle last year on his return after a year out. It took up until late in the season before he was even in comparable form to Ricciardo.

I see Alonso taking a while to get to grips with his machine after spending two seasons out. Bahrain did paint a slightly rosy picture as some drivers made errors and Alonso pulled off a great qualifying lap at a circuit he knows well. But you know he’s still nowhere close to the Alonso of old. In fact I can’t even remember the last time he really struggled in getting performance out of a poor car.

I’m glad he’s admitted it to himself that he’s still got room to improve. We know he’s got the talent and the work ethic. So it’s only a matter of time now.
@Todfod