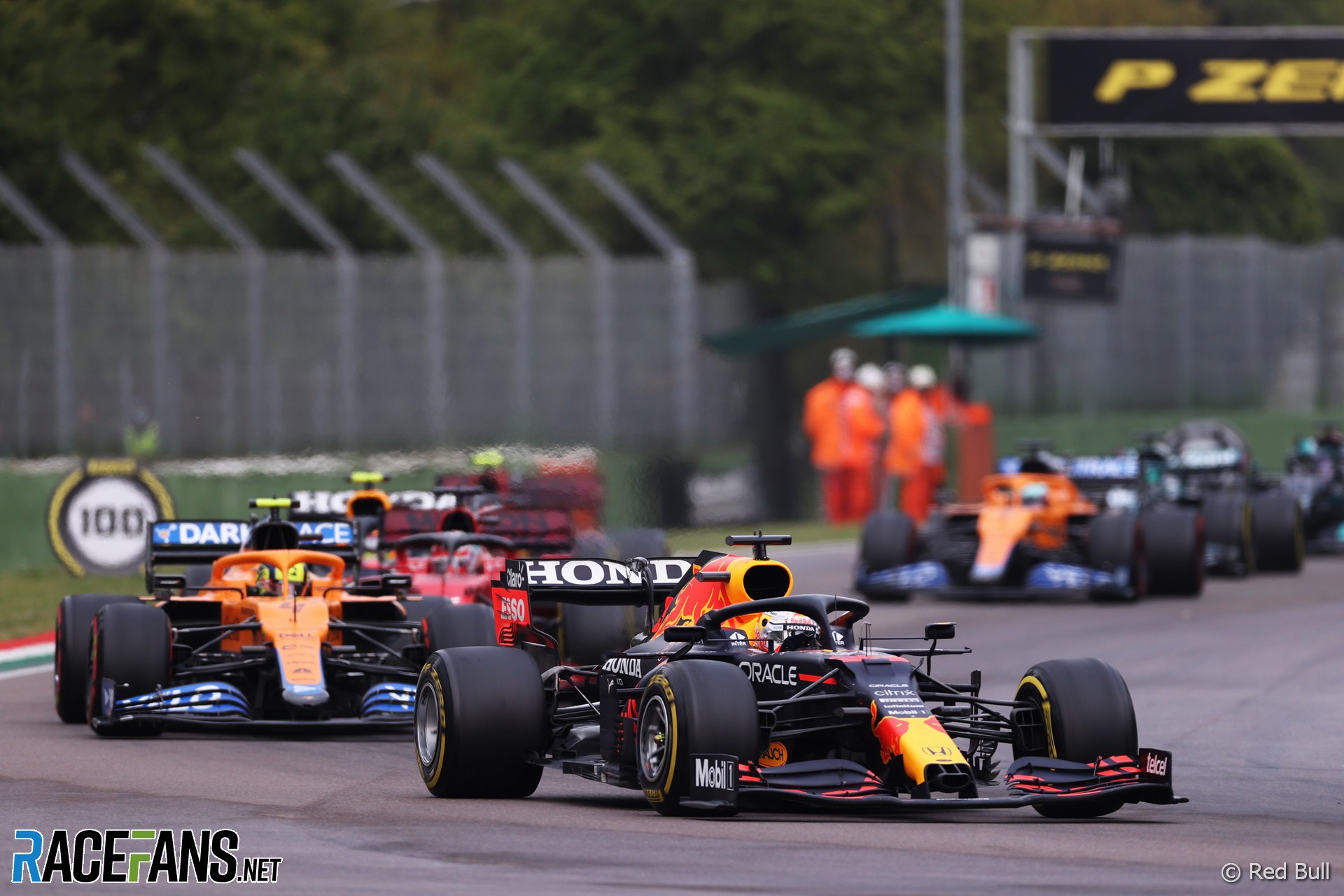 Lap 34 at Imola: Following a lengthy red-flag period due to the huge crash between George Russell and Valtteri Bottas, the race is about to restart.

Heading out of Variante Alta the Safety Car heads for the pits, leaving leader Max Verstappen in charge of the field. But as he turns left into Rivazza 1, the 17th of 19 turns, his Red Bull breaks traction and he heads for the grass.

There was alarm on the Red Bull pit wall. Team principal Christian Horner said his reaction was “not print-able”.

Charles Leclerc, following close behind Verstappen in second place, faced a split-second decision: Should he overtake the Red Bull driver? The RB16B had gone off the track, albeit briefly.

He chose not to. “I considered this at one point, but at the same time I backed off, “Leclerc explained later.

But behind Leclerc, Lando Norris was surprised his rival chose to hold position. “I think if I was in P2, I would have gone for it, because you have a chance at winning then,” he said. “It’s a risk worth it.”

What would have happened had Leclerc taken that risk? The Ferrari driver would have assumed the lead of the queue of cars, and could have accelerated away, leaving Verstappen behind and setting the restart in motion.

On the face of it, this might seem like a pointless gamble. Verstappen had a quicker car and would have been able to overtake Leclerc. Given the risk the stewards might rule Leclerc was not within his right to pass Verstappen, and issue a penalty, the Ferrari driver surely had too little to gain by seizing the opportunity to make off with the lead?

However the situation is more complicated than this, and Leclerc might have played a blinder by overtaking Verstappen at this point, as the case of Kimi Raikkonen shows.

At the beginning of the same lap, Raikkonen spun off at Tamburello. He was passed by Lewis Hamilton and Yuki Tsunoda. Having been incorrectly advised by his team that he was not allowed to overtake them, Raikkonen remained behind the pair until the restart.

This was a violation of the rules. It earned Raikkonen a 10-second stop-go penalty (converted post-race to a 30-second penalty) – a swingeing sanction which cost him his first points finish of the year.

Formation laps which take place before race starts, and restarts following suspensions, are treated differently to Safety Car periods. In the latter a driver goes off and loses positions is not allowed to regain them. This was why Sergio Perez received a 10-second time penalty earlier in the same race.

But when a race is being restarted following a suspension, as with a regular race start, drivers must commence racing in their designated order. Therefore if Leclerc had passed Verstappen and the pair restarted the race in that order, the Red Bull driver could have been considered in breach of the same rule as Raikkonen.

The regulation is as follows: “A penalty under Article 38.3(d) will be imposed on any driver who fails to re-enter the pit lane if he has not re-established the original starting order before he reaches the first Safety Car line on the lap the Safety Car returns to the pits.”

Theoretically, Leclerc might have been regarded in breach of the same rule by not letting Verstappen past. But that’s a doubtful interpretation, for the same reason Hamilton and Tsunoda were not punished for Raikkonen’s error. The onus would have presumably been on Verstappen to correct the order by pitting, as per the rules.

Had Leclerc acted as Norris suggested, the following scenario is therefore possible: Verstappen spins at turn 17, Leclerc passes him, Leclerc leads the field around turn 18 and crosses the first Safety Car line before Verstappen. At this point Verstappen either takes the restart out of position, and cops the same penalty as Raikkonen, or has the presence of mind to dive in the pits as demanded by the rules.

Either way, Verstappen is snookered, and his chances of winning the race are gone. As the stewards noted in Raikkonen’s case, the 10-second stop-go penalty is mandatory.

None of this is to say that Leclerc definitely should have passed the Red Bull. There remains a risk that the stewards might have deemed he was not within his right to pass Verstappen just because the Red Bull driver had headed briefly off-track. This area of the rules is grey.

Leclerc’s belief that Verstappen “always had one wheel on the track” during his error may not be quite right, as video footage of the incident shows. But assuming any particular interpretation of track limits is a risky business in F1, especially in a split-second call such as this.

However had Norris been driving Leclerc’s car we might have seen a very different end to Sunday’s race – and a rather more controversial one.

As the stewards also noted in their verdict on Raikkonen, there are contradictions in this area of the rules which need clearing up. It has long been the case that drivers who go off the track and lose positions at the start of the race can and must regain their positions, and those who do so during Safety Car periods must not. However recent changes to the rules to permit mid-race standing or rolling restarts have caused confusion, as last weekend’s incidents involving Perez and Raikkonen show.

On Sunday evening the stewards acknowledged a “contradiction that when the cars are behind the Safety Car during a Safety Car period, [they] are prohibited from passing, but when they are behind the Safety Car for a restart, they are permitted to – even though the reasons for a rolling start are that the track conditions don’t permit a standing start”. There is sound precedent for why the rules have evolved the way they have, yet the inconsistencies are self-evident and should be addressed.

96 comments on “With Norris’ instincts, Leclerc could have snookered Verstappen into losing the race”