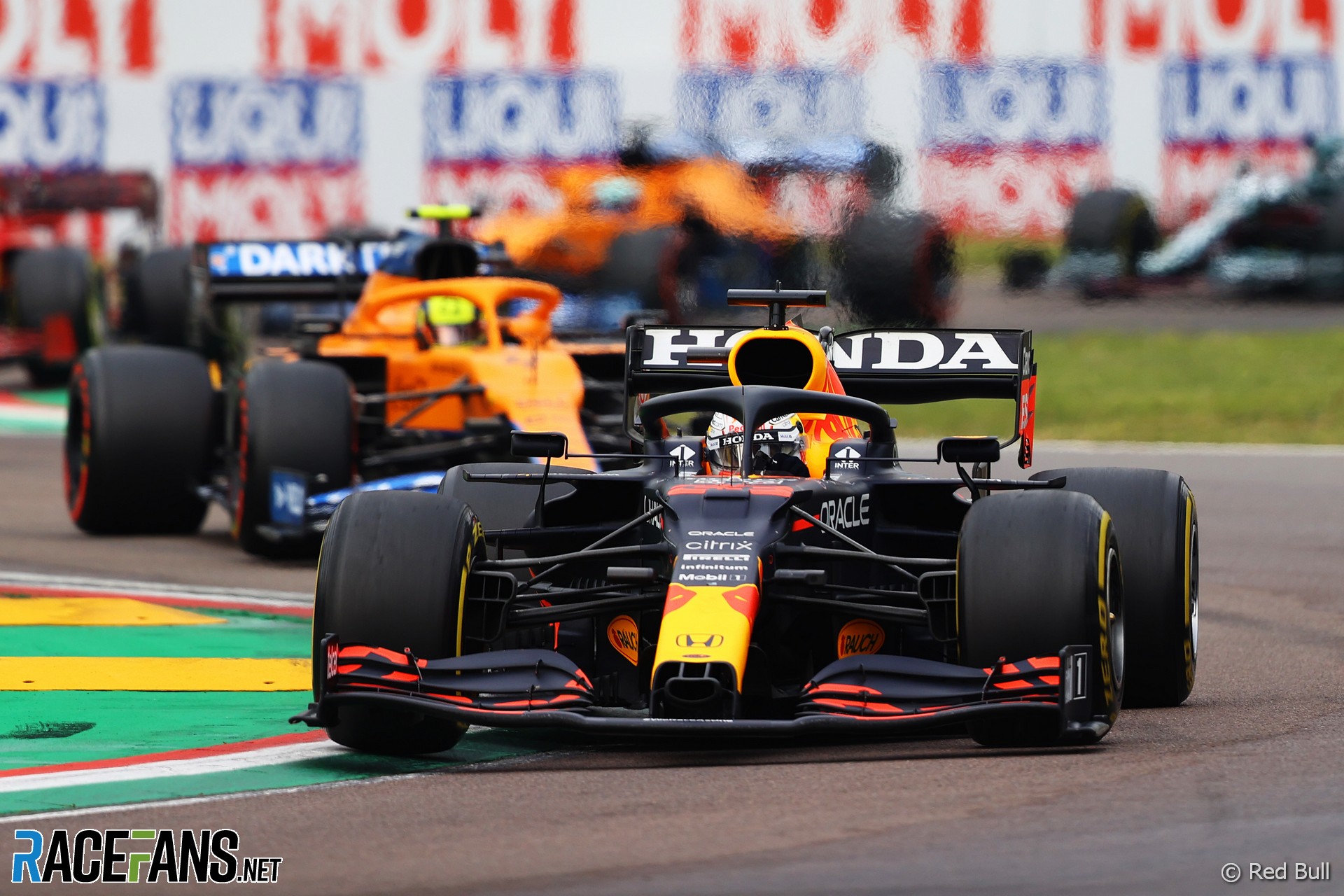 Lando Norris believes he could have passed Max Verstappen to lead the Emilia-Romagna Grand Prix, but would have ultimately lost a podium finish if he had.

The McLaren driver moved up to second place on lap 35 of Sunday’s 63-lap race by passing Charles Leclerc after the restart. He was aided by McLaren’s decision to put both its drivers on soft tyres instead of the widely-preferred medium compound at this stage in the race.

Norris then closed within a second of race-leader Verstappen and would have been in a position to use DRS against his rival had he stayed that close on the next lap.

“This was a big decision I had to make,” Norris said in a social media video. “I’m on the soft because my only chance of overtaking with Leclerc would be at the very start. And on the soft tyre, compared to a medium, they come in a bit quicker. So we made the decision to go onto the soft.”

“I think I could have overtaken Max,” he said. “Especially on like lap two [after the restart].”

But as that lap began Norris’ team told him on his radio to “look after the tyre”.

“I could have overtaken Verstappen, I think,” Norris continued. “Maybe not. I could have at least tried.

“But I wouldn’t have finished on the podium, I think, if I tried, because I would have killed my tyres and I think Leclerc would have got me.”

Norris fell to third after Lewis Hamilton passed him, and took the chequered flag 1.8 seconds ahead of Leclerc.

McLaren’s director of strategy and sporting Randy Singh said opting for soft tyres had been a “really difficult decision.”

“The medium tyres would get us to the end fairly safely,” he explained, “but we only had the sets that came off the cars available, and there are always issues getting those back up to the optimum temperature in the time available. The soft tyres, in contrast, were already in the blankets and get up to temperature much more quickly

“Added to that, you don’t know how the race is going to restart until after the tyres are fitted. The soft tyres will have a better launch but, even with a rolling start, will perform better over the first few laps. So, really, the question was: do we want to take the benefit at the start and try to gain a position, but accept we may struggle at the end of the race – or do we want to stick with the medium compound?”

While Singh was convinced Hamilton “would have got past Lando irrespective of his tyre choice” the decision to take softs “is what delivered a podium to us – alongside Lando’s excellent stint managing the tyre but also managing the situation with cars behind.”

“We should not underestimate how good a job he’s done,” Singh continued. “When you get passed by a car in that kind of stint, it’s incredibly difficult to not let it cascade into letting the other cars get past. I think he drove with an enormous amount of maturity and skill to keep that third place.”