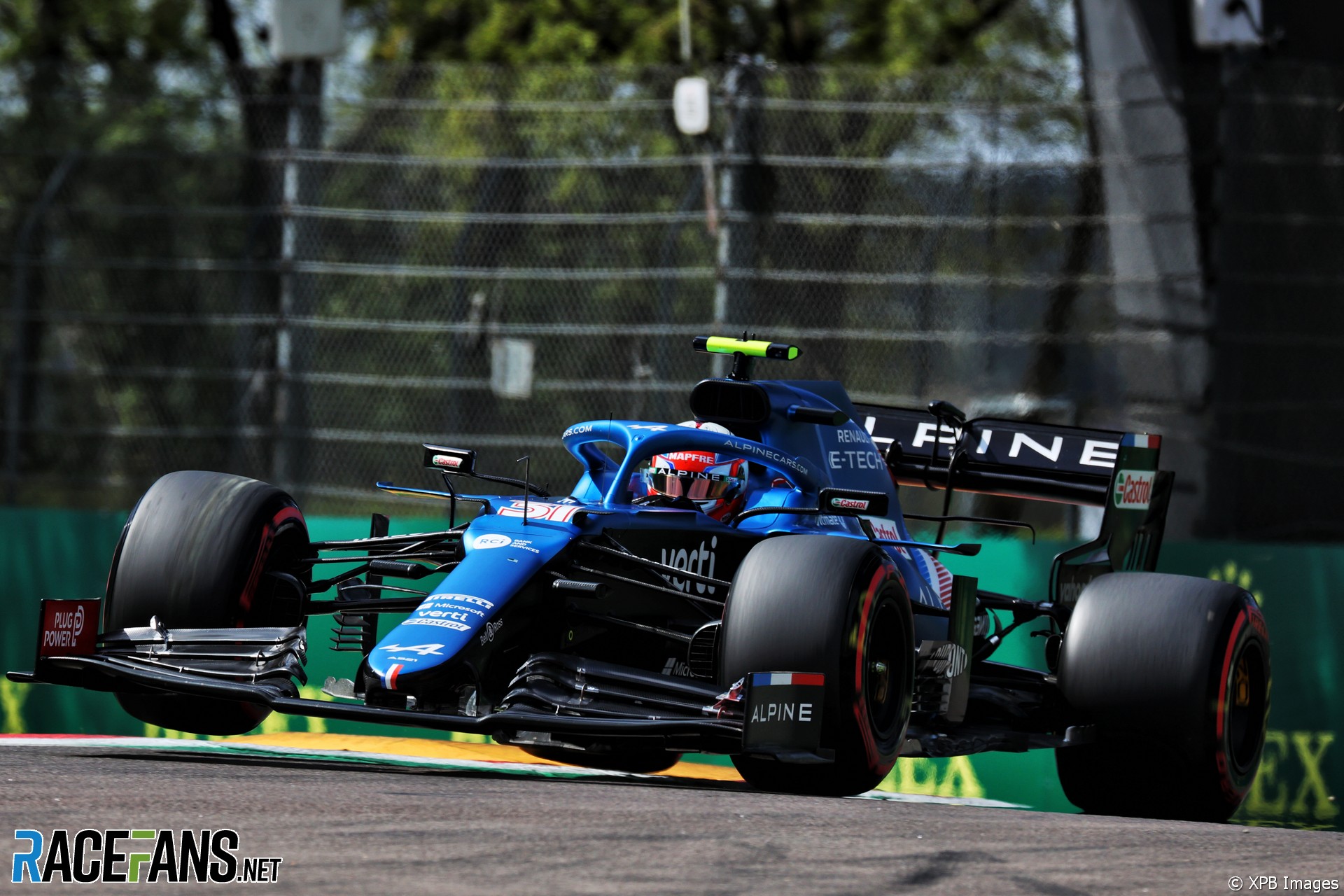 In the round-up: Esteban Ocon says Alpine’s upgrades for the Emilia-Romagna Grand Prix were a clear improvement from their Bahrain car but not the endpoint of the team’s development.

After the first race this season in Bahrain seemed to show them at a significant disadvantage, Alpine brought an upgrade package to the Emilia-Romagna grand prix. However Ocon said the team had the potential to perform better than they did.

“I think we have our spot in the top 10, that is clear today. Today hasn’t been a straightforward race like it has been the rest of the weekend. I think we had the potential to potentially be P7, P8, that the dry pace was was actually quite solid.

“We were quicker than the Sauber [Alfa Romeo] today. We are not where we want to be exactly, but we’ve made a step this weekend with the upgrades that we got and we felt good in the car driving it for myself and Fernando and, yeah, we want to score more points in the next race.”

Formula 3 testing resumed at Barcelona yesterday, with two days of running at the venue where they will join F1 as the support series for the Spanish Grand Prix next month.

The morning session started wet, with the track empty for a lot of the first part of the session due to continuing rainfall. However once cars were able to get out on track they moved relatively quickly to slicks and the times tumbled. American Red Bull junior Jak Crawford, new to the category, was quickest.

Victor Martins was able to top the faster, drier afternoon session with another Red Bull Junior, Jack Doohan, who finished 26th in F3 last year, just behind him. Martins is a rookie in F3 this year, having won last year’s Formula Renault Eurocup title.

A total of 106 laps at @autodromoimola for @ValtteriBottas today at the wheel of the @MercedesAMGF1. Underneath him? Pirelli’s new #fit4f1 18-inch 2022 tyres. The next 18-inch test for Mercedes will be on the wets at @PaulRicardTrack in France at the end of May. pic.twitter.com/PIIJyJ3FHF

106 laps today for VB on those 18-inchers 👊 Cheers @pirellisport, it's been fun! pic.twitter.com/vZhbNZZfqT

Formula 1′s expansion in the U.S. is in motion, now it needs a star American driver (CNBC)

Mario Andretti: "(Colton Herta's) showed in his rookie season in IndyCar, and he won some premium races like (in Austin)... beat two of the very best Indy has to offer. The entire race, he held off Will Power and Scott Dixon. This is one kid I’d love to see him get a break over there because to the U.S. colours again – Formula 1 is like the Olympics in a sense."

"Fans will attend the 105th Running of the Indianapolis 500, with up to 40 percent of venue capacity permitted, totalling approximately 135,000 fans."

"The fastest driver during testing was Oliver Bearman (15, Great Britain, Van Amersfoort Racing), who finished top in two of the six sessions. Bearman recorded a lap time of 1:23.525 minutes on Monday morning, which was still the best time when proceedings drew to a close."

"Both teams need both their drivers performing. If Bottas cannot up his game and start supporting Hamilton at the front and taking points off Verstappen and Red Bull, then perhaps Russell could find himself in a Mercedes a lot sooner than next season. Such ruthless steps are not uncommon in the Formula 1 paddock."

After the extended debate about whether this year’s regulations were unfairly affecting them, Adam says that Aston Martin risk quickly squandering goodwill with their reaction:

I wanted to like Aston Martin but they make it really hard to do so. This constant complaining about being hobbled by the regulations while having won with an illegal copy last year is really souring.

Obviously, they don’t have the money of Mercedes but that team’s managed to win a race with their low rake car so there’s clearly a solution to the problem that Aston Martin would know if they designed it. It just strikes me as sour grapes that their copied homework isn’t giving them instant success anymore.

Still not sure what the point of the team is other than bought prestige and an ego trip for Stroll. I get the feeling Red Bull would be happier to see AlphaTauri win a race than Mercedes would be if Aston Martin did.
@Rocketpanda