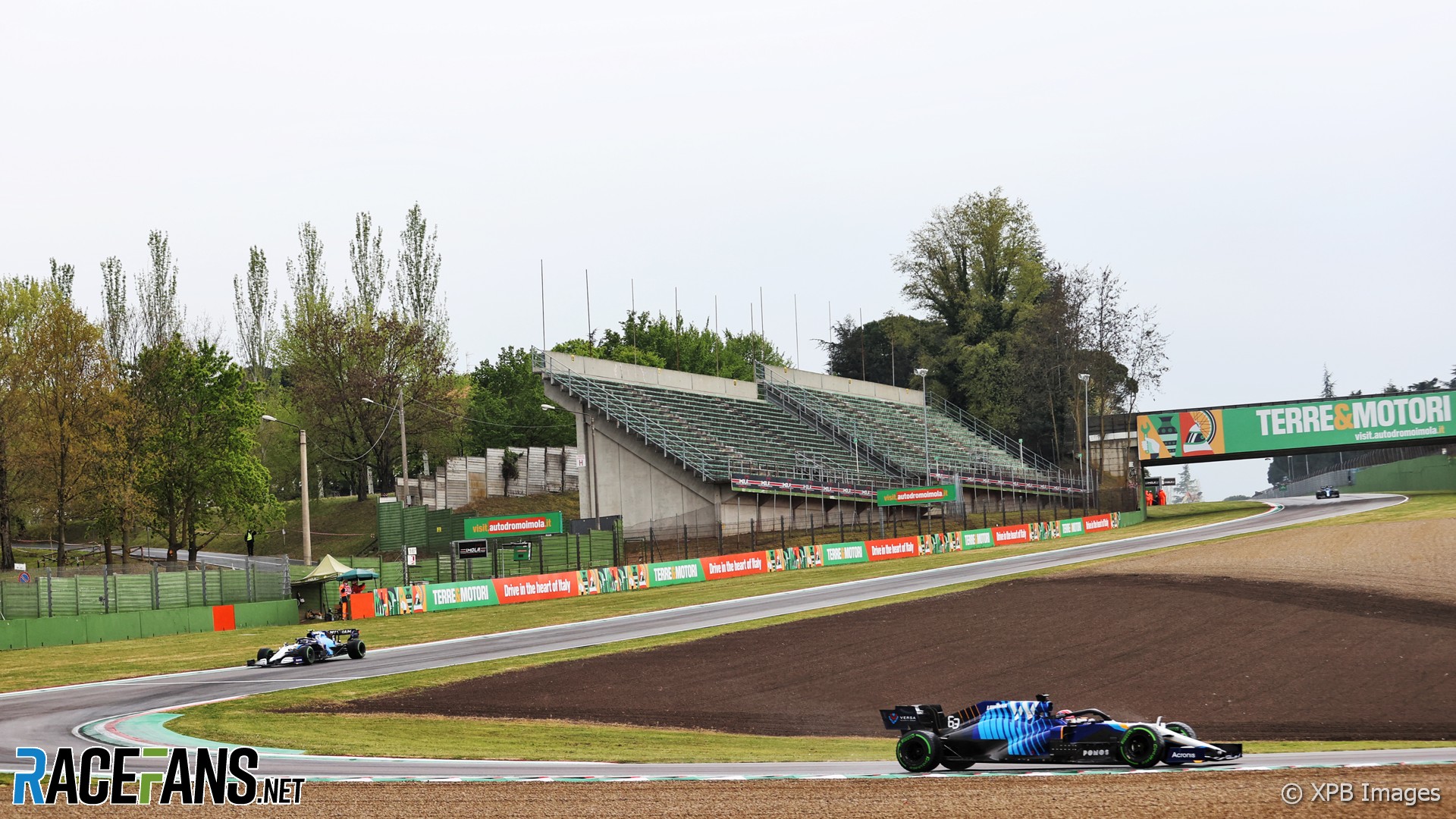 In the round-up: Williams has been working flat-out to replace the parts which were destroyed when both their drivers crashed out of the last race.

George Russell’s collision with Valtteri Bottas in the Emilia-Romagna Grand prix ended Williams’ involvement in the race, as Nicholas Latifi had already gone out in a first-lap collision with Nikita Mazepin.

“The result in Imola was disappointing and has required a big effort from the factory to recover our stock of parts” said the team’s head of vehicle performance Dave Robson. “Fortunately, there were a lot of good things from the weekend too and we are now in Portugal looking forward to building on the progress made last time out.”

Following an uncompetitive start to the season in Bahrain, Williams were encouraged to see both their drivers reach Q2 last weekend, a result they intend to build on this weekend.

“We hope that the FW43B will work well here, allowing us to build on the performance that we showed in Imola,” said Robson. “We have plenty of work to get through on Friday, primarily focussing on the tyres, but we are looking forward to the challenge.”

Mercedes had ‘Get out of Jail Free” card – Wolff

Mercedes team principal Toto Wolff said he feels fortunate the team is still ahead in the points standings after the problems they encountered at Imola. Bottas retired shortly after Lewis Hamilton lost a lap by skidding off the track, though the subsequent red flag allowed the world champion to unlap himself.

“Imola was a crazy race and the kind of grand prix that lives long in the memory,” said Wolff. “There were so many ups and downs and there were a few moments where it felt like we wouldn’t score any points at all. It was a rollercoaster of emotions, from the disappointment of Valtteri’s scary accident to the thrill of Lewis’ recovery drive.

“To come away leading both championships almost felt like a get out of jail free card, because our rivals didn’t maximise the opportunity we gave them. And it just proves what a challenging season we have ahead of us and how quickly things can turn around in Formula 1.”

Wolff believes the team may face competition from teams besides Red Bull this weekend. “We’re expecting another close fight with Red Bull, and both McLaren and Ferrari could also be in the mix too,” he said.

Not seeing a great number of people speaking up for Qualifying Sprint races who aren't employed either by F1 or an F1 broadcaster. But perhaps that's just my echo chamber?#F1

"There are health issues that we’re all aware of, whether it’s Montreal or the public health (departments) in Quebec City or Ottawa. So we’re trying to deal with that."

Dennis: 'We played our hand perfectly in Valencia. Nobody thought lights-to-flag win was possible' (Formula E)

"I really didn’t think it was going to work out, having to lead every single lap going into the race – leading was something nobody wanted to do and nobody thought it was possible. That’s just not the ideal strategy and we went into it hoping that Alex (Lynn) would overtake us but it became quite apparent that he definitely didn’t want to do that."

"Of course you do your due diligence, you look around at what is the talent, we have so much of that here based in the UK and Ben (Hodgkinson's) name absolutely came to the fore."

"Not only that, the three Fox Sports channels carry plenty of major sporting events such as Formula 1, Australian Open, US Open, and many more. As live sports have always been seen as a major crowd puller for pay-TV services in Malaysia, this would not bode well for both Astro and unifi TV."

"While the championship proper will commence with the Shannons Motorsport Australia Championships at Sandown Raceway in September, the S5000 International Triple Crown starts with S5000s return to the Formula 1 Rolex Australian Grand Prix in Melbourne, set for 18-21 November 2021."

"To celebrate the Beat The Pro competition we are giving away a Predator Gaming set-up worth £2,500, signed merchandise by Romain Grosjean and 100 Xbox Game Passes for PC. The competition is open to UK entries."

Mark Webber and Valtteri Bottas had the unenviable jobs of being team mates to multiple champions, but the Red Bull driver fared better, argues @Fer-no65:

My argument, fan-stuff aside, is that Webber pushed Vettel harder than Bottas pushes Hamilton. If we were to compare him with someone, I’d say he’s more of a Rosberg in his relationship with Hamilton: not as good, but managed to get in the way, and tried everything, whatever it cost, to beat him.

The difference with him and Rosberg is that Rosberg got lucky that his battles with Hamilton happened when no one else could even fight for wins. Webber fought during arguably the most competitive fields we’ve seen in the last two decades or so. Remember 2010 and 2012 the championships were incredibly tight, with Renault/Lotus, McLaren, Mercedes and Ferrari all battling Red Bull on merit, and sometimes beating them.
@Fer-no65