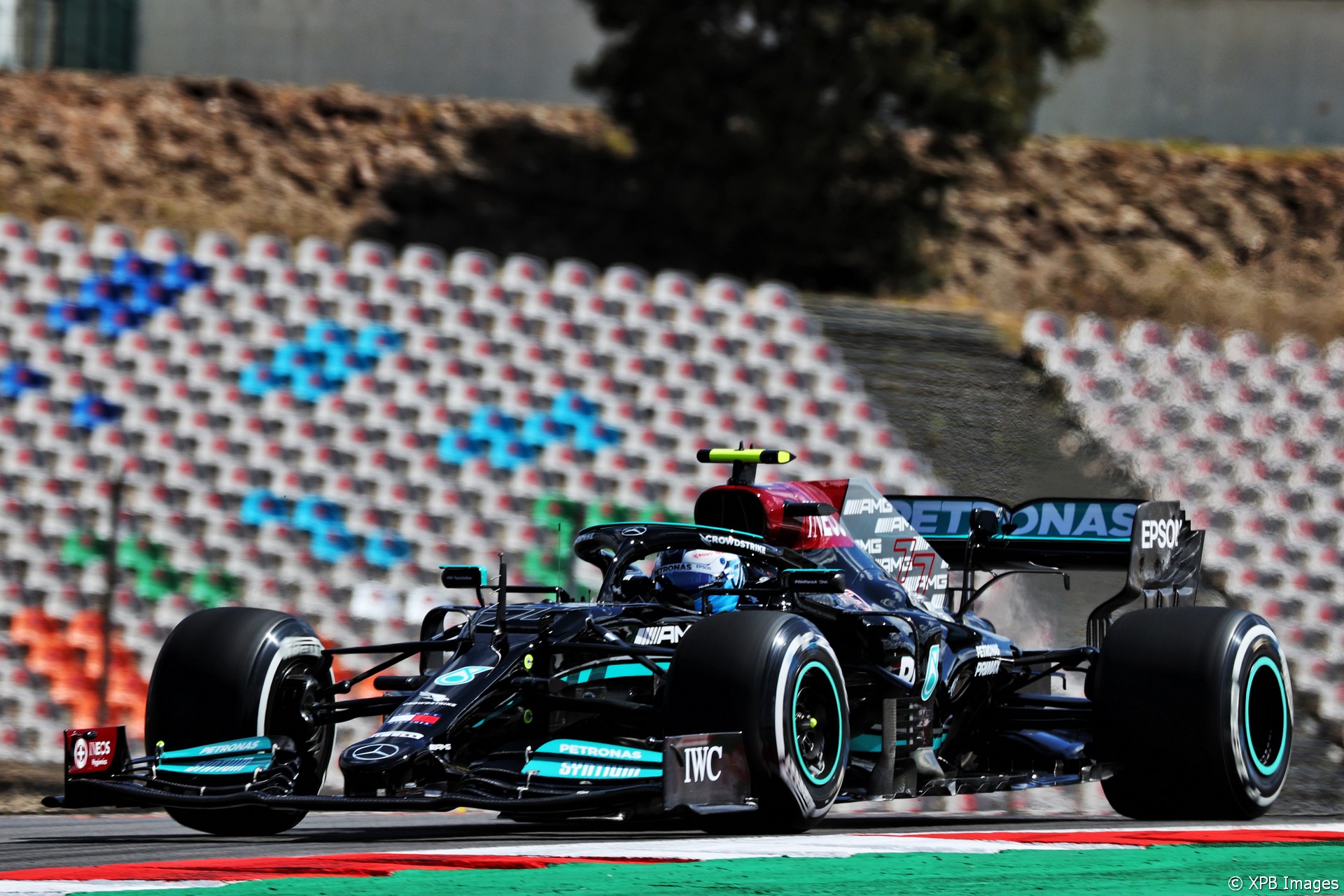 Valtteri Bottas led a close first practice session at the Autodromo do Algarve in Portugal, pipping Red Bull’s Max Verstappen by two-hundredths of a second.

Daniel Ricciardo took an early lead in the times, setting a 1’21.821 time on his eighth lap on hard tyres. Last year drivers found it took multiple laps to get tyres into an operating window, especially noticeable at the race start and that seems consistent again at this year’s Portuguese Grand Prix. A lot of teams opened practice with relatively long runs with the hard tyres, looking for that window.

The low-grip circuit was a particular issue for Lewis Hamilton, who radio’d early to call the car “pretty undriveable.” His team told him that it was due to low surface temperatures, calling him back into the pits for further work.

Hamilton finished the session fifth, behind Bottas, both Red Bulls and Charles Leclerc, who set a good time for Ferrari. He was only four-hundredths off Perez’ third-fastest time and nearly eight-tenths ahead of team mate Carlos Sainz Jnr, who finished the session ninth.

Max Verstappen also struggled with his set-up, on the soft tyres. Verstappen said vibrations in the car were so severe he couldn’t see after just eight laps. Pirelli have brought their hardest compounds to Portimao this year, so although he was using the softest tyre available, it’s constructed from the C3 compound – which was the medium tyre at Imola.

Sebastian Vettel erroneously pulled up to the McLaren pit box halfway through the session, forgetting he no longer drives for the third-placed team. Fortunately, his current team Aston Martin are only in the garage next along from McLaren, whereas had he gone all the way to Ferrari’s position this year it might have been harder to correct; he joked on the radio that it “had to happen sometime.”

Callum Ilott ran first practice for Alfa Romeo, in for Antonio Giovinazzi. He did 18 laps over the session, finishing 18th and four-tenths behind Kimi Raikkonen. This was Ilott’s second attempt at an FP1 session after he was due to run for Haas at last year’s Eifel Grand Prix but the session was never green-lit due to weather conditions.

Pierre Gasly did the most laps of the session, at 24. Bottas finished the session ahead, setting his best time on soft tyres of a 1:19.648, followed by Verstappen and Perez within two tenths.