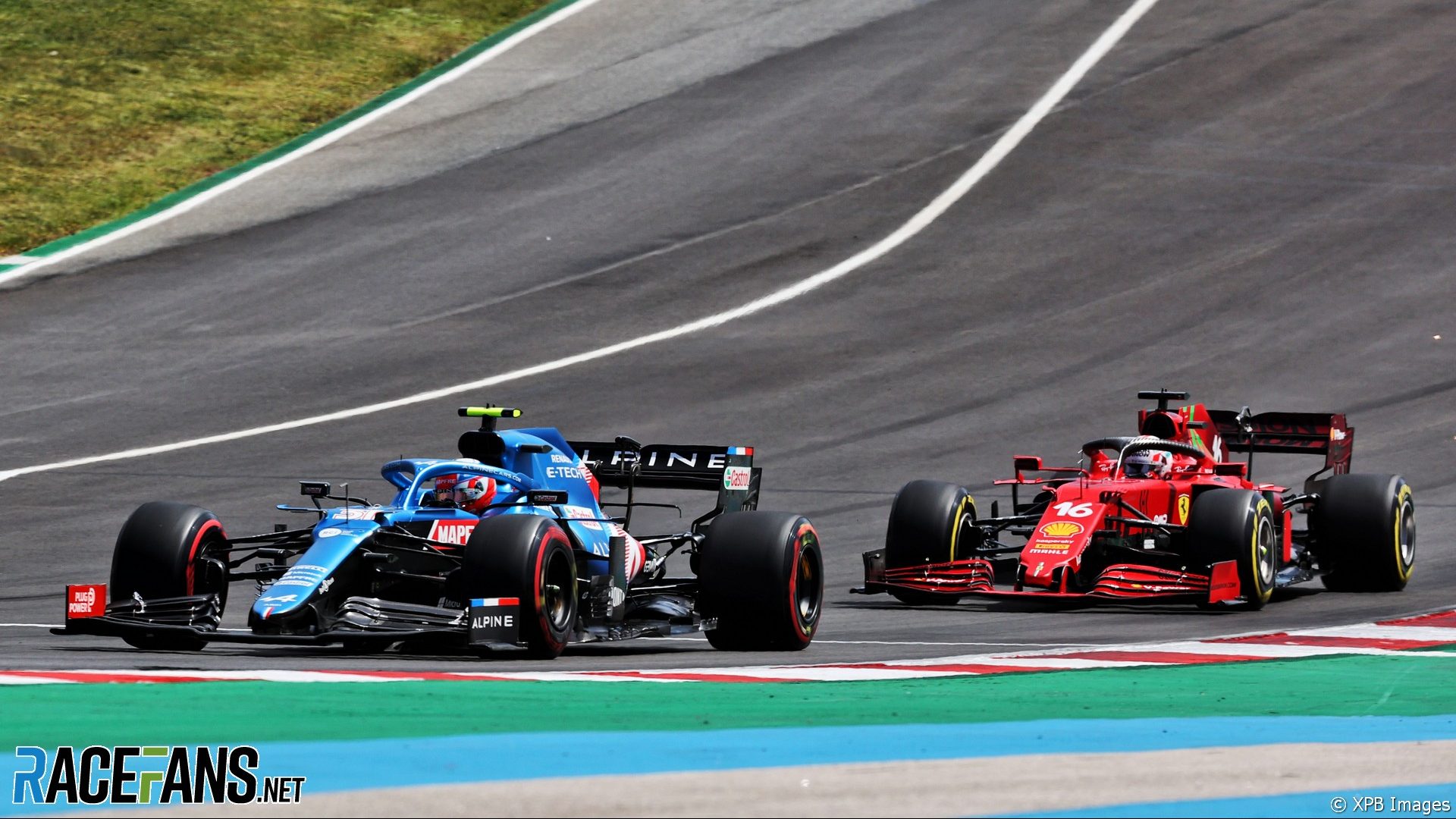 In the round-up: Esteban Ocon is encouraged by Alpine’s much-improved pace from last weekend.

Alpine’s improvements mean they can fight with McLaren, Ferrari

Alpine struggled for pace at the opening two races in Bahrain and Imola, but scored a strong double points finish yesterday.

At the end of the race, both cars were able to fight and finish ahead of the Ferrari of Carlos Sainz Jnr and Daniel Ricciardo’s McLaren, which Ocon said reflected on the scale of their improvement.

“It was a really fun race,” he said. “Definitely good to have some battles with the cars that were quicker than us in the first two races. It definitely feels good to have done such a step in terms of performance.”

Alpine pace too much for Alfa Romeo points hope

A resurgent Alpine was bad news for Alfa Romeo, who remain point-less after yesterdays race. It came as a disappointment to Antonio Giovinazzi after he beat the Aston Martins.

“It was just a clear race from my side,” he said. “I had some fun with Fernando in the beginning and some fun with Sebastian in the end. We started P12, today we were faster than Aston Martin, slower than Alpine. So it was not enough to be in the top 10.”

Tsunoda says respecting track limits had no effect on pace

Yuki Tsunoda was warned about respecting track limits during the Portuguese Grand Prix, his engineer telling him he could not go over at turn one again after two warnings. It was the second track limit warning Tsunoda has had since making his F1 debut, having been also warned in Imola.

Asked by RaceFans what he changed from then on in the race, Tsunoda said it had little effect. “To be honest, not much, I respected the track limits after that and I don’t think it affected the car performance.

“There’s a lot more space to make the car improve, to have more pace, so I don’t think the track limits were affecting it.”

So close once again (Alfa Romeo)

"It was a mixed Sunday for us: on the one hand, we lost one car through contact between team-mates, which is one of the worst things that can happen, in a sporting sense, to a team; on the other hand, Antonio did a really good job in the remaining car, keeping behind most of our direct rivals and finishing just outside the points."

"This result strengthened our hold on third position in the Constructors’ Championship, which is obviously very encouraging. It’s important we keep developing the car and delivering strong performances over the next few races – starting at the Circuit de Barcelona-Catalunya in less than five days’ time."

"Today’s result was not what we were expecting. We were unable to capitalise on the potential seen in qualifying and that cost us a lot of points in the Constructors’ classification."

"It was a weekend with progress. I know I keep on using the word progress, but that is what we need to make, and we’re doing it."

"The car has shown some good traits this weekend, but we are still lacking the stability that we need to be able to race in the pack. With the tyres hard to keep in their working window, once you start losing places, it is very difficult to recover."

" Jak Crawford (Motopark) will be taking part in Race 3. The American Red Bull Junior driver is turning 16 today, therefore taking delivery of his international licence. The Stewards have authorized his participation, although he could not take part in any session of this event, as he has extensively tested on this track with the Dallara 320 during the winter."

"Update 5 will also feature the complete livery set for the current season of for Formula E, all approved and licensed by each Formula E team."

What happened to NACAM F4's visit to Houston this weekend? (Formula Scout)

"Pictures were posted by the series from free practice and qualifying, then five hours later it declared that the event was now a pre-season test rather than the opening round. After much internal and online confusion, series CEO Flavio Abed then stated 'we start at Monterrey with four races per weekend', insinuating that the May 4-5 round at Texas’s Motorsport Ranch was now either also a pre-season test or cancelled entirely."

Lewis Hamilton took another win today – his 97th in his career – and iCarbs says there’s one obvious way to prevent him taking a 98th: competitors need to replicate Hamilton’s ability to recover from his own errors and capitalise his rivals’:

It’s very, very simple. You have to be near-perfect to stop Hamilton and Mercedes. Yep I expect probably more occasional mistakes from all the drivers, but Red bull have got to capitalise where Mercedes fall down, even if it’s a minor trip.

I don’t really care if Hamilton makes mistakes in all the races, for the rest of the season, in order for Verstappen to be a real contender and a worthy driver to take the mantle from Hamilton, beat him with the best tools you ever been given to take him on.
@icarby