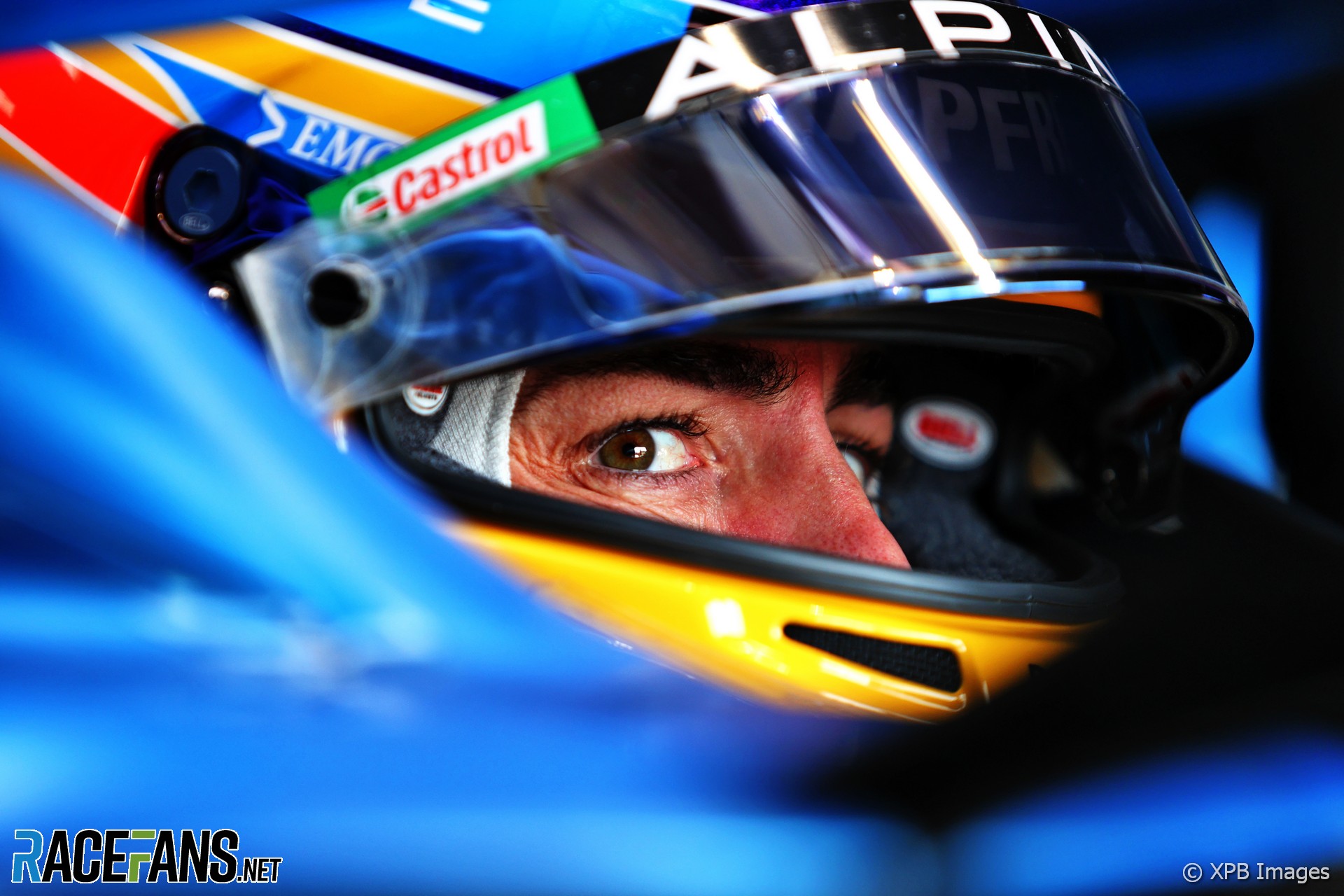 After two years away from Formula 1, two-times world champion Fernando Alonso is back.

He has a familiar look, too. The Alpine shade of blue may be a little deeper than his title-winning 2005 and 2006 Renaults, but mix in that bright yellow helmet and it’s hard not to think of the car-driver pairing which ended the dominance of Michaetl Schumacher and Ferrari some 15 years ago.

At the season opener in Bahrain it was if he had never been away. He took his A521 into Q3 and looked in good shape in the race, until he was sidelined by a technical problem.

Imola was trickier. As with several of his experienced peers at new teams this year – Sebastian Vettel at Aston Martin and Daniel Ricciardo at McLaren – he found it difficult to extract the maximum from a still-unfamiliar car at a track where the margin for error is slim.

That fact was demonstrated when rain pelted down on the reconnaissance lap and Alonso skidded into a barrier. He recovered to take his first point of the season, thanks in part to Kimi Raikkonen’s penalty, but he lagged behind his junior team mate Esteban Ocon all weekend.

The 39-year-old played down concerns over his comeback form when he spoke to select publications, including RaceFans, at Autodromo do Algarve ahead of the Portuguese Grand Prix. The media chatter around early concerns over his performance “is getting bigger than what it is”, he suggested.

“I was the first to admit that I was not a 100 percent in Imola and not comfortable and probably underperforming,” said Alonso. “But it was one race and in one race that with that underperformance, I finished two tenths of a second behind my team mate. So it cannot be a big thing.

“But in Bahrain I was happy and probably overperforming. In Imola, underperforming. But we need a couple of races to settle down everything.”

The two-week gap between the Emilia-Romagna Grand Prix and last week’s round in Portugal exacerbated the perception, he said. “I am at a point in my life where I feel good and I feel capable of driving better than ever. But that doesn’t mean that you don’t find difficulties while entering a new adventure or in this comeback.

“At the same time, I had one weekend where I was not totally comfortable in Imola and the problem that in Formula 1 there are a lot of media, a lot of articles and unfortunately two weeks between races, because if it was back to back from Imola to [Algarve], there would’ve been much less talk.”

Alonso’s words were vindicated later in the Algarve weekend. Though he again failed to accompany Ocon into Q3, he climbed to eighth in the race, scoring more points on what was a better weekend all round for Alpine. Even so, the team has begun 2021 at a lower level than it ended the previous season, as Renault.

“I’m aware it’s a challenge and it’s [especially] a challenge this year also, because the midfield has been always a challenge,” Alonso acknowledged. “Where your team or your position was quite defined, and a supreme weekend would be doing it at 105 percent but we can perform in 90 percent, normally you can be between ninth or eleventh.

“This year, with the midfield as it is, you can be seventh or 15th in two tenths [of a second] if you don’t perform perfectly. So we [must] go for that perfection every weekend.”

That heightened level of competition is part of what has drawn Alonso back to F1. During his two-year absence, he experimented with endurance racing in WEC and IMSA, oval single seaters in IndyCar and off-road rallying in Dakar.

As F1’s delayed 2020 season began, Alonso was encouraged by what he saw of the state of the competition. He put pen to paper just a month after F1 restarted racing last year.

It’s also clear what attracted him was the promise of a more competitive seat than the one he might have had in 2019.

“In 2018, when I left the sport, I was very honest with everybody, saying that I had better feelings or ideas elsewhere than Formula 1 and I had more attractive challenges in WEC or in Indy or in Dakar than what Formula 1 offered me at the time,” he explains.

“Now it’s exactly the same point; in 2020 when I made the decision to come back, there were other series on the table and I thought that Formula 1 was the best challenge in that moment and the best competition.”

Alonso feels F1 is in a more stable position out of the series available to him at the moment.

“Even with the pandemic, the teams are still very strong and in good health, economically and on the performance side to produce fantastic cars and a good show while some other series, maybe they’ve been more affected by the pandemic and by the sponsorship and by everything.”

“Obviously with IndyCar I did only one race, it felt good and it’s going to always be a nice championship. But maybe I was more attracted by F1. Dakar is still one thing that I can do in the future and has no problem of having more years in other categories. And WEC, I think is in a transition period at the moment with the Hypercar until all the manufacturers, they don’t come until 2023.

“So I thought that Formula 1 was the best thing on the table, like it was not in 2018. But this is obviously only a personal opinion and a personal motivation that drives you to choose the next challenge.”

Liberty Media can also take a share of the credit for Alonso’s return. He clearly approves of the direction the sport has taken since their takeover.

“From the arrival of Liberty Media the sport went into having a better knowledge of what the the fans needed, what the show means about the sport itself and the performance and the engineering war that is inside Formula 1,” he says.

“We need also to listen to fans and we need to put a good show on Sundays and I feel Liberty understood this from day one. They just needed a couple of years to settle down and to produce new ideas.

“I think the cost cap, the 2022 rules, the sprint [qualifying] races, they are all things that are there just to produce better racing and better entertainment for everybody. So I’m happy with all the things that I see in the sport.”

Alonso appears to be another of supporter of the Sprint Qualifying format who backs it more in the hope it may succeed than out of a conviction it will.

In more ways than one, Alonso views his first season back in the sport as an interim year. From the moment the deal was done he made no secret of the fact he wanted Alpine to prioritise developing their car for the 2022 F1 season and its new regulations, which were delayed by a year due to the pandemic.

“On the overall picture, yes, 2021 is a preparation year, it’s no doubt,” he said. “I think everybody on the grid, after the delay of the 2021 rules into 2022, we understood and we accepted that 2021 is preparation year, is a post-Covid season with more or less similar cars of last year.

“It’s a season to test things like the sprint races. It’s a test season in a way for many things.” There may be “a revolution in 2022”, he says, “and that’s what we will want in terms of fighting for the championship and other possibilities.”

Alonso arrived in Formula 1 with Minardi two decades ago. The superb and little-heralded performances he produced that year hinted at what was to follow in a career which at one stage looked like it might yield the kind of success drivers like Vettel and Lewis Hamilton subsequently enjoyed. As is often remarked of Alonso, had a few points gone the other way in 2007, 2010 or 2012 he realistically could have become a three, four or even five-times champion long before now.

He is utterly convinced he still has the speed within him to win another title. And with the benefit of experience, that speed is now allied to a superior understanding of how to draw on his team’s advice and expertise.

“I think you are maybe more mature now and you are working closer with your team,” he says of his development over the past 20 years. “When you come into Formula 1 and you are young you listen to everyone, yes, you try to understand what they are trying to tell you.

“But when it comes to your instinct of driving, when you close the visor, you are just racing hard. Because your background until that point was only karting and younger formulas that you have to survive by yourself only, you didn’t have that amount of people just helping you. So you are still driving and feeling like that.

“But then with time – you still rely on your instinct, yes – but you are driving as a part of the team and try to optimise things.

“So it’s not that you lose the speed, but you are driving in what you believe is the most efficient way of driving the car and maybe sometimes even against your instinct of what you will do if you were out on track. But eventually you understand and you believe and you trust that you are doing the best way for the overall performance.”

The difficulties experienced drivers have faced adapting to new teams is already one of the themes of the 2021 season. Alonso hasn’t been quite there on outright qualifying performance so far, but metronomic consistency in the races remains his indisputable trademark. In that tough midfield, he climbed five places in each of the last two races. Expect to see the blue car with the yellow helmet nearer the front soon.