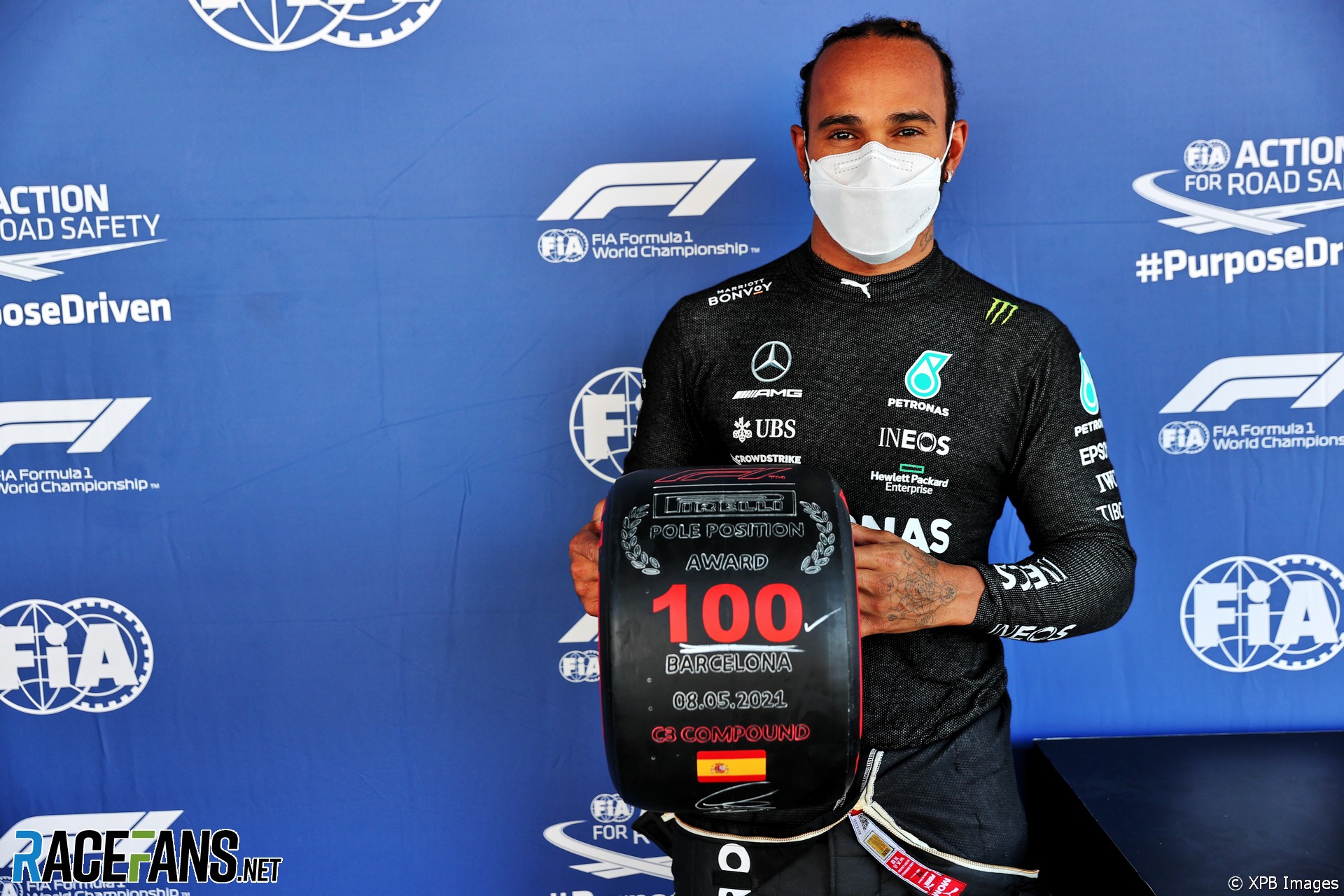 Lewis Hamilton took the 100th pole position of his career after beating championship rival Max Verstappen by only 0.036s.

As in last weekend’s Portuguese Grand Prix, none of the front runners was able to find time on their final runs in Q3, with Hamilton and Verstappen lining up ahead of Valtteri Bottas and Charles Leclerc.

Esteban Ocon will start fifth after Alpine’s best qualifying performance of the season so far. Sergio Perez will start in eighth on the grid after a spin in Q3.

The start of qualifying for the Spanish Grand Prix was delayed by 10 minutes to allow for repair work on barriers around the Circuit de Catalunya to be completed.
Both Red Bulls of Max Verstappen and Sergio Perez opted to take their first runs of qualifying on the soft tyres, as did the two Ferraris of Charles Leclerc and Carlos Sainz.

Mercedes chose instead to go on the medium tyres, with Valtteri Bottas going quickest of all and Hamilton sixth quickest behind Sainz and the two Red Bulls.

Lando Norris went quickest of all in the first sector on his first hot-lap of the day. But his effort was ruined when he came across a gaggle of cars at the chicane, all trying to make space ahead of their own laps. The stewards will investigate the incident after qualifying.

In the closing minutes of the session, Kimi Raikkonen was able to briefly jump into safety in 15th, before being knocked out by Lance Stroll and Alfa Romeo team mate Antonio Giovinazzi.

With George Russell and Sebastian Vettel also improving, Yuki Tsunoda was at risk of a surprise early elimination. Unfortunately for the AlphaTauri driver, he ran wide on the exit of turn 11 and went onto the gravel, meaning he could not improve and secured his elimination.

“I can’t [censored by FOM] believe this car!,” the rookie shouted over team radio.

As the chequered flag flew, Lando Norris’s final attempt was traffic-free and the McLaren driver took advantage to record a 1’17.821 – the fastest time of the session and quickest of the weekend up to that point.

The wind began to pick up as the second session of qualifying began. With the field so close, no team opted to take a risk and qualify on the medium tyres.

Valtteri Bottas was again faster than Hamilton as lap times began to fall deep into the 1’17s with Norris once again showing good pace by being faster than the two Ferrari team mates after his first attempt.

But Max Verstappen’s first lap was an ominous one for his Mercedes rivals, as he was the first to break into the 1’16s to go almost half a second faster than Bottas and seven tenths quicker than Hamilton.

George Russell – not for the first time – chose to wait until the track had cleared before making his first attempt in his Williams. His first time was only enough to move him to 14th, ahead of Antonio Giovinazzi.

With seconds ticking down, Sergio Perez put himself safely through into Q3 with a greatly improved lap, with Daniel Ricciardo also making his final lap count to move out of the drop zone.

By the time the session had ended, Lance Stroll was eliminated, with the AlphaTauri of Pierre Gasly also knocked out in 12th ahead of Sebastian Vettel in the second Aston Martin.

Antonio Giovinazzi improved to move ahead of George Russell, who will start 15th for tomorrow’s Spanish Grand Prix.

Just over a tenth of a second separated Fernando Alonso in tenth to Vettel in 13th.

Ocon was told by his engineer that Q3 would be a matter of “who jumps first” as the final shootout for pole position began. And when the Alpine driver went provisionally fastest ahead of both McLarens and both Ferraris on used soft tyres, it looked like an accurate prophecy.

But after Hamilton and Verstappen had completed their first runs, it was Hamilton who held the slightest of advantages, just 0.036s ahead of his main championship rival, with Bottas in third.

Sergio Perez ruined his first attempt by spinning his Red Bull on the approach to turn 12, bringing out the yellow flags but able to recover without compromising any of his rivals’ runs.

With just two minutes remaining, the field of ten cars all ventured out for the final run together. Verstappen was anxious not to miss out on starting his lap and passed a number of cars on the out-lap, including the two Ferraris, to ensure he would cross the line in time.

Despite Hamilton failing to improve on his own provisional pole time after running wide out of the chicane, neither Verstappen or Bottas would also be able to find time on their second runs, meaning that Lewis Hamilton would take pole position for the Spanish Grand Prix – his 100th pole in his F1 career.

Verstappen will line up behind his championship rival on the front row, with Bottas in third. Charles Leclerc will line up fourth for Ferrari, with Esteban Ocon securing Alpine’s best starting position of the season in fifth.

Carlos Sainz Jnr will start sixth in the second Ferrari, with Daniel Ricciardo in seventh after he failed to reach the chequered flag in time to start his final run. Sergio Perez could only manage eighth on the grid in the second Red Bull, with Lando Norris and Fernando Alonso rounding out the top ten.

114 comments on “Hamilton takes 100th pole by hundredths from Verstappen”