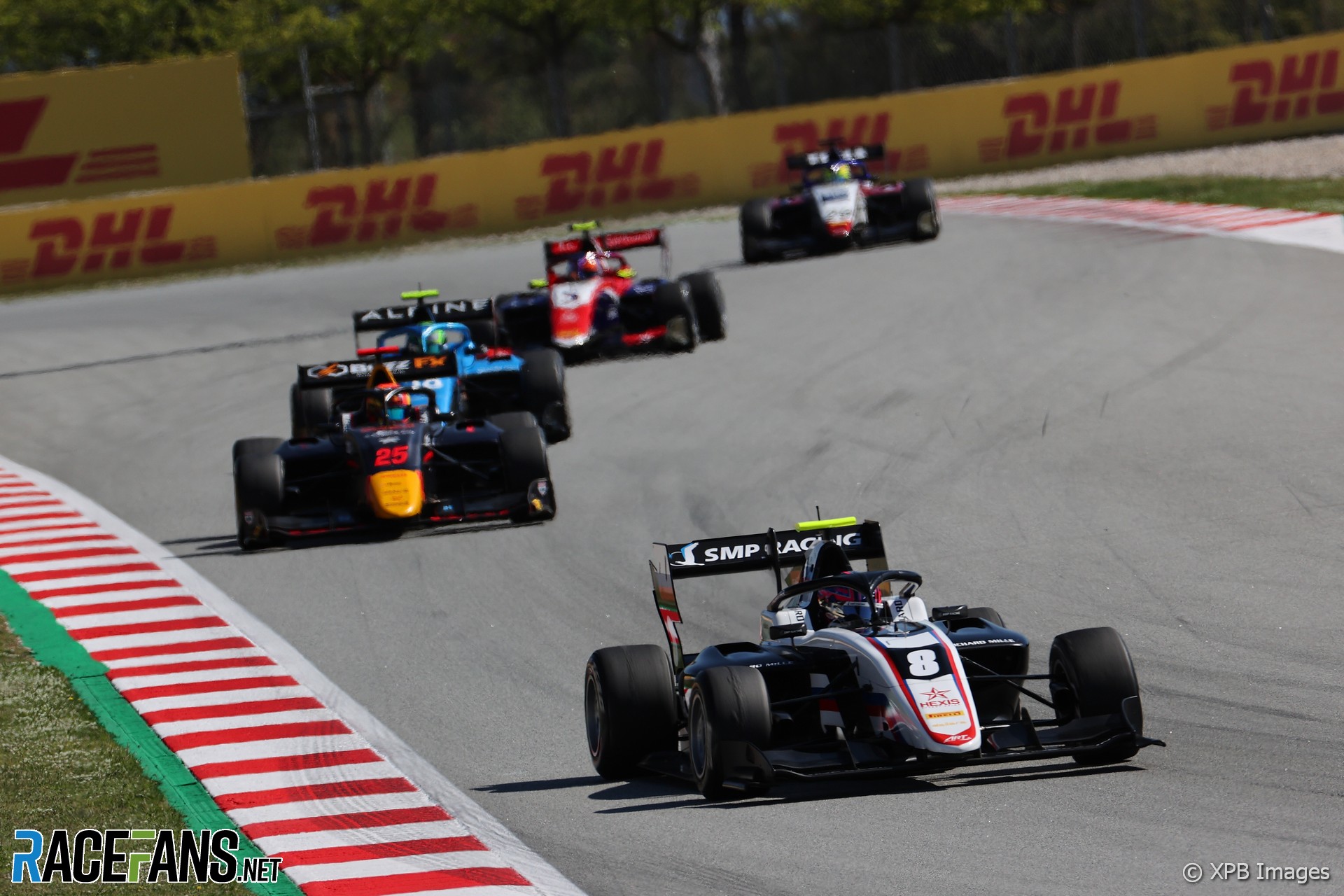 Aleksandr Smolyar began the Formula 3 season in strong form by winning the opening race of the F3 season in Barcelona having passed Jonny Edgar early in the race.

The ART driver finally made amends for his lost victory at Silverstone last year, where he received a a post-race penalty, and took his first F3 win. Clement Novalak climbed from sixth on the grid to finish second, with Caio Collet taking a podium on his debut with third.

As the field lined up on the grid for the start, Ido Cohen ground to a halt on the exit of the final corner, causing the start to be aborted and an extra formation lap ordered. Cohen’s Carlin was eventually recovered into the pit lane, allowing the race to finally get underway.

When the lights went out, the front three of Edgar, Smolyar and Collet led the field away in an orderly start where the field of 30 drivers successfully avoided any major mishaps.

After DRS was activated on lap three, second-placed Smolyar got a good run on the leading Edgar along the main straight at the beginning of the fourth lap, pulling alongside the Carlin and out-braking him into turn one to take the lead of the race.

Edgar unsuccessfully tried to return the favour the next time around. Despite getting within centimetres of contact with Smolyar’s rear wheel, he managed to avoid clipping his front wing against the ART, and remained in second.

As Smolyar slowly began to pull away at the front, Edgar was eventually caught by Novalak, who had passed Collet for third place. Novalak made good use of DRS along the main straight to sweep around the outside of Edgar into turn one and into second place. Edgar’s frustrations were compounded further when he was further demoted by Collett and then Logan Sargeant.

With Novalak in clear air, the Trident driver began making ground on the race leader. But his dreams of his first F3 victory were dashed when Oliver Rasmussen went off the circuit at the final corner after riding up onto the sausage kerb at the exit of the chicane, beaching his HWA in the gravel trap and prompting the Safety Car to be deployed with just over two laps to go.

With no time left for further green flag racing, Smolyar secured his first official F3 victory to start the season and also grabbed the bonus point for fastest lap. Novalak was forced to settle for second, with Collet rounding out the podium.

Logan Sargeant finished fourth for Charouz, with Edgar in fifth ahead of Olli Caldwell and Frederik Vesti. Dennis Hauger, who took pole position in yesterday’s qualifying session and will start there in race three tomorrow, crossed the line eighth. Victor Martins and Matteo Nannini – who is also racing in F2 this year – rounded out the points.

On his return to motorsport, Juan Manuel Correa finished a respectable 15th after running in the midfield throughout the race.

Arthur Leclerc’s debut in the series was ruined by a left rear puncture, forcing him to pit his Prema for another set of tyres and dropping him to the rear of the field.

Enzo Fittipaldi will start race two this afternoon from pole position after he finished in 12th place. He will be joined on the front row of the grid by David Schumacher, who came in 11th after fading from fourth on the grid in race one.