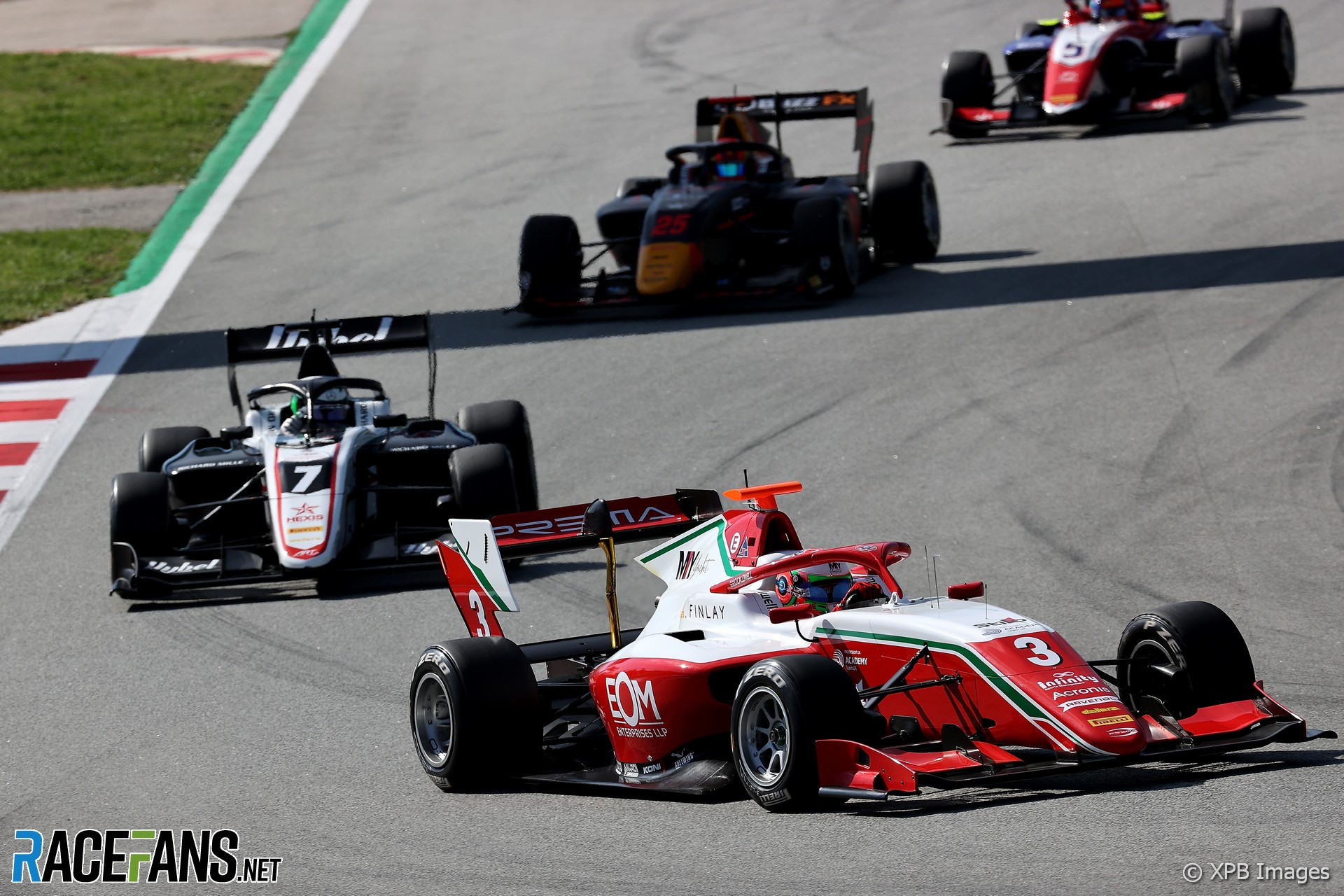 Collisions between two separate pairs of leading drivers opened the door for Olli Caldwell to win the second Formula 3 race of the day at Circuit de Catalunya.

In an incident-filled second race, Enzo Fittipaldi collided with David Schumacher as the pair fought over the early lead, before Matteo Nannini and Dennis Hauger also came together in a later batter for the top spot on the penultimate lap.

The accidents saw Caldwell inherit the lead and take his first F3 victory in his second race in the category. Victor Martins finished second for MP Motorsport with Frederik Vesti taking the final podium position in fourth.

An emotional Juan Manuel Correa claimed his first point in his second race since returning from severe leg injuries by finishing in tenth place.

At the start, Enzo Fittipaldi led away from pole position, resisting pressure from David Schumacher on the long run down to the first corner.

Race one winner Aleksandr Smolyar started from 12th on the partially reversed grid, and had slight contact from Clement Novalak’s front wing as the field navigated the first corner. Smolyar appeared to suffer a right rear puncture, losing control of his ART and skidding into Logan Sargeant, putting both cars into the gravel and out of the race.

The Safety Car was deployed while the two cars were cleared. The race resumed at the start of lap five, with Fittipaldi leading from Schumacher and Matteo Nannini. Schumacher had a speculative look around the outside into turn one, but Fittipaldi was easily able to defend the lead.

Schumacher stayed within reach of the leader and on the start of lap 12 picked up a strong slipstream along the main straight with DRS before diving up the inside of Fittipaldi under braking for turn one to take the lead.

Fittipaldi looked to take back the lead of the race from the Trident driver and used DRS to try a move around the outside of turn one. As the pair ran side-by-side through turn two, Fittipaldi ran onto the kerb and hit the side of Schumacher, sending the Trident into the barriers and out of the race.

The Safety Car was deployed for the second time as Schumacher’s car was recovered, with the incident under investigation by the stewards. But any potential race penalty for Fittipaldi was rendered moot when the Charouz driver slowed to a halt on the outside of turn four and joined Schumacher in retirement.

Nannini therefore inherited the race lead and held onto it when the race restarted on lap 18, despite pressure from Dennis Hauger on the run to the first corner. When Hauger got a better run down the pit straight two laps later, he looked to the inside of the leader but understeered into Nannini, sending the HWA spinning out and breaking his own front wing.

After the second collision between two different pairs of leaders, Caldwell was now in the lead of the race, while Hauger headed to the pits to replace his front wing.

Caldwell kept his cool and ticked off the handful of laps remaining to take the chequered flag first in just his second race in Formula 3. Victor Martins took second place, joined on the podium by ART’s Frederik Vesti.

Novalak finished fourth following his podium appearance in race one, with Caio Collet in fifth after he took third in the opening race. Jonny Edgar claimed sixth place for Carlin, with Ayumu Iawasa, Jack Doohan and Jak Crawford each taking their first points of the season.

Juan Manuel Correa claimed the final point of the race in tenth in only his second race since recovering from severe leg injuries sustained in the horrific F2 crash at Spa that claimed the life of Anthoine Hubert. An audibly emotional Correa was heard sobbing over team radio as he thanked his ART team for their efforts.