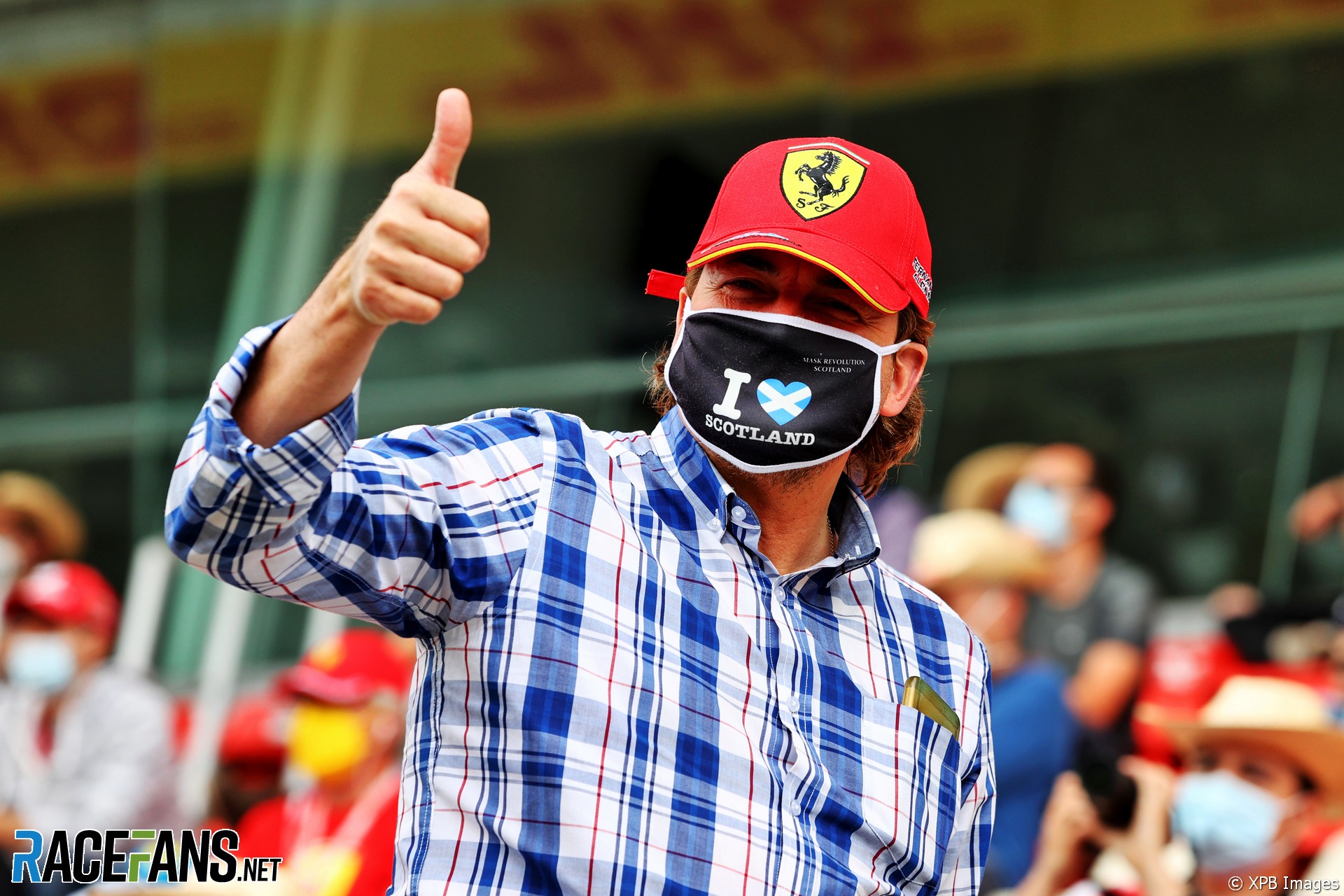 A late start to the day – final practice doesn’t begin until noon. As has become my habit this year, I head trackside for the session. En route I spy the Hungarian Grand Prix promoter, who confirms the August round will run to full spectator capacity (70,000) after the national government approved plans for both the UEFA final and the race. Separately, I’m told the Red Bull Ring is also eying full attendance.

In recent years the Spanish Grand Prix opened the European leg of the season. This year it’s third, and as such traditionally attracted race promoters. However, only said Hungarian promoter and USGP boss Bobby Epstein are present this year, so I vow to track the American down later to get the latest on his race

My mate Sandor and I start our walk from the access road alongside the pit lane exit, then head for turn one to enable us to appreciate the full spectrum of brutal acceleration, heavy braking and sharp turn-in. Thereafter we pop across the 100 metres to the turn five-six-seven complex where the flowing high-speed stuff is simply breath-taking. 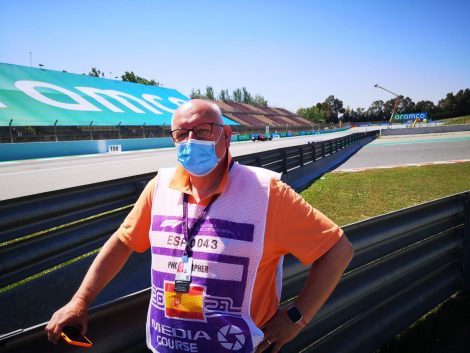 Through this sector Max Verstappen is visibly ‘on it’ while Lewis Hamilton looks planted; their respective team mates less so – and so it proves when we later check the times.

Lunch time – noodles and salad – and as wander back to the media centre I watch as teams go about pre-qualifying business. It’s fascinating to observe interactions between personnel from different teams: many are former colleagues, so I wonder what secrets are shared during such chats, particularly when folk from allied teams huddle. I remember when McLaren and Ferrari folk looked the other way as they passed…

Before qualifying I hang about the mixed zone perfectly situated alongside the main paddock entrance. A colleague took to social media to complain about being ignored by paddock posh, but I have no such problems. Indeed, precisely the opposite: Even if they don’t have time for in-depth chats, most greet or engage in small talk and many agree to return or call. F1 is a global sport, but it’s a small world.

I spy RTL Germany’s colourful Kai Ebel sporting a microphone and wonder what he is up to given the broadcaster lost the F1 rights to Sky Deutschland. It turns out Sky granted RTL the rights to four events after woeful ratings for the pay channel. The word is the deal could be extended further after 95% of the country’s population did not see Mick Schumacher make his debut in Bahrain, which caused a backlash.

After the usual round of post-qualifying interviews and Zoom calls it’s back to my hotel in Mataro, where I prepare for a (French) radio recording on Sunday morning about the chances of a South African Grand Prix. The continent needs to be represented in what is a world championship, but it begs the question: which event would it replace given that 23 is the maximum number of races the teams seem prepared to accept?

When Miami was announced for the 2022 F1 season the sport’s CEO Stefano Domenicali made the point that the race in Florida would replace an existing event – which I took to mean Spain’s race – and the same logic surely applies in the case of South Africa. So, which race will drop off if Kyalami’s bid is successful? France? Belgium? Possibly either Imola or Portimao do not return? That is the harsh reality of F1’s global expansion. 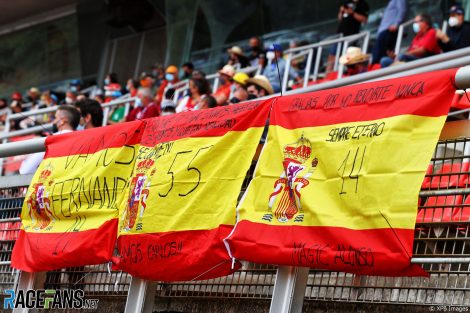 Check out of hotel and drive to circuit – and seems a bit like 2019: spectator cars are lined up at the gates after the promoters selected 1,000 fans by ballot. While the number is less than one per cent of capacity it points to a return to normality and it is heartening to see them dressed up in fan gear. True passion never dies.

I connect with Epstein by Whatsapp and he confirms that his race, too, will host spectators – a full house of 120,000, he says, after the Texan authorities approved his plans. Indeed, Bobby believes the USGP could be the largest weekend sporting event in the USA this year. Although the Indianapolis 500, the Super Bowl and Kentucky Derby may attract more spectators on a single day, he has the advantage of a three-day event. 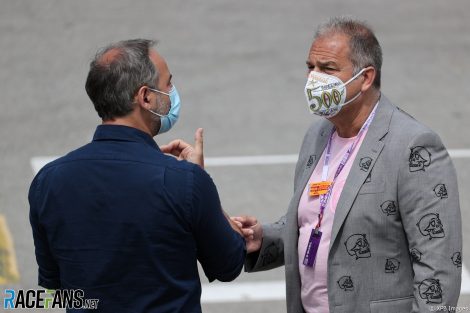 He says the Circuit of the Americas opened its ticket sales a fortnight ago and sold the full allocation of 30% within five days – a process that previously took two months. He puts the demand down to post-Covid appetite for F1, greater awareness in the USA due to the Netflix ‘Drive to Survive’ series and the draw card of the Saturday Billy Joel gig.

I mention that Andy Cichon, the band’s bass player is a hardcore F1 fan. He tells me that Elton John’s drummer Nigel Olsson – they played COTA in 2015 – is another devotee of the sport and we ponder an F1 supergroup given that the likes of Nick Mason (Pink Floyd) and Eric Clapton are also fans. Geri Halliwell – previously ‘Ginger Spice’, now wife to Red Bull CEO Christian Horner – could even be lead singer…

After our chat I head for a Covid test and on my return stop at the mixed zone, from where I spy Ebel being congratulated by Domenicali and presented with a pass. It turns out it is the broadcaster’s 500th grand prix – oh the irony that RTL no longer hold the full rights, yet he has honorary paddock access.

Jos Verstappen pops into the mixed zone and gives his read on the race ahead for his son. “The first corner will be key and thereafter it will be a matter of looking after tyres and strategy.” He also reckons the Mercedes is “slightly faster than the Red Bull” – illustrated by thumb and finger a millimetre apart – which is exactly how it pans out later.

I watch the race start from a balcony overlooking the line, situated opposite the main grandstand. During the build-up I realise just how much atmosphere fans – even if only 1,000 – contribute to an event. Their cheering and cat-calls truly add colour and I simply cannot wait for Monaco, which plans to host around 7,500 per day under strictly controlled circumstances.

Talk to you from there in a fortnight.