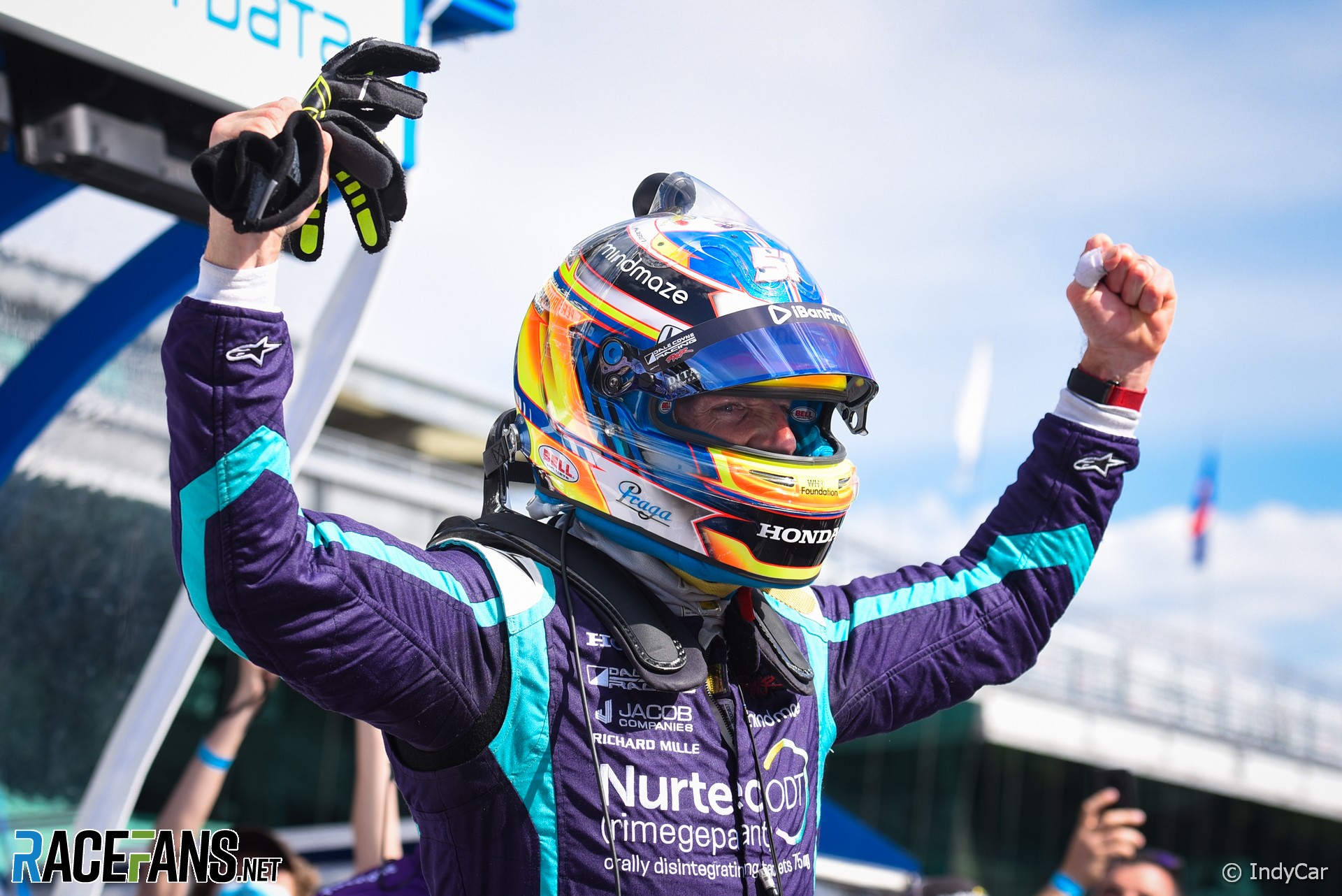 Romain Grosjean says he feels a new lease of life after taking his first pole position for 10 years.

The former Formula 1 driver will lead the field at the start of today’s IndyCar race at Indianapolis Motor Speedway. He scored his first pole position since the beginning of the 2011 GP2 season three races into his first IndyCar campaign.

“It’s like being alive again,” said the Coyne/Rick Ware driver.

Grosjean only started from the front row once in his Formula 1 career, at the Hungarian Grand Prix in 2012, his first full season in the championship.

“I was lucky early in my career to get a good Lotus and be in the front row, third spot quite a bit, which was great. But obviously there were the Red Bull of Sebastian Vettel at the time and just on another level.

“It feels really good to be in IndyCar on a field that everyone got a chance to go for it.”

After losing his Haas drive at the end of last year, Grosjean said he’s put Formula 1 behind him.

“A lot of people are asking how I felt watching the first race, the Formula 1 race of the season, and I wasn’t there. I said ‘guys, the chapter is closed for me’. I’ve had a good time, now I want something else. That’s what I came looking for.”

The Swiss-based driver is commuting to America for the road and street rounds of the championship this year, and evaluating whether to commit to the series for the long term.

“I love the atmosphere between the drivers, I love the tracks,” he said. “The cars are fun to drive, we can go for some good stuff. I’m really happy.

“Family-wise it’s a bit of a tough year because I’m away from them quite a bit. We knew what was going to happen this year before deciding for the future. I’m happier, I’ve said it for a few times, I’m happier than I’ve been for a very long time.”

Grosjean has made quick progress since his first IndyCar test three months ago. He took seventh on the grid for his debut at Barber Motorsport Park, another road course, but found the St Petersburg street track more of a challenge, lining up 18th.

He said the Indianapolis Motor Speedway grand prix course, which held F1 races between 2000 and 2007, is “the one that feels the most familiar” to the F1 tracks he has raced on.

“I can tell it was actually designed for Formula 1 the way the curves are, the layout and the corners. I knew I was going to feel okay on the track quite quickly, whereas St. Pete takes a little bit more time to learn. Barber, a few tricks here that you need to understand. Here for me it’s a bit more straightforward.”

Having taken his first pole position at his third attempt, Grosjean is optimistic more will follow. He is due to compete in at least nine further races this year, including the series’ return to the same track in August.

“The good thing about being on pole today is that it may not be the only one,” he said. “We have a chance when we race again to do more. It’s not like a one-off because it was dry for one or wet for the other.”

While Grosjean drew satisfaction from some results towards the end of his F1 career, he admitted he missed the excitement of competing at the sharp end.

“Even through the last few years that have been tough in terms of results, I take the example of Germany last year where I finished ninth, with the Haas car, that was quite special. I think Germany 2018 as well, we were like 12th after the last Safety Car. I came back finishing sixth or something in the last 10 laps. That was quite cool.

“Even though you’re not winning, you’ve got that feeling. Days that I completely forgot about is when you get to race weekend, you got those butterflies because you know if you do everything right, you may end up on pole or trying to win the race. That’s definitely something I had no chance to do over the last few years.”

Today’s race will be his third attempt at a rolling start in IndyCar, but this time he will be at the front of the field. “I’m just going to go through the rule book one more time before going to bed,” he admitted.