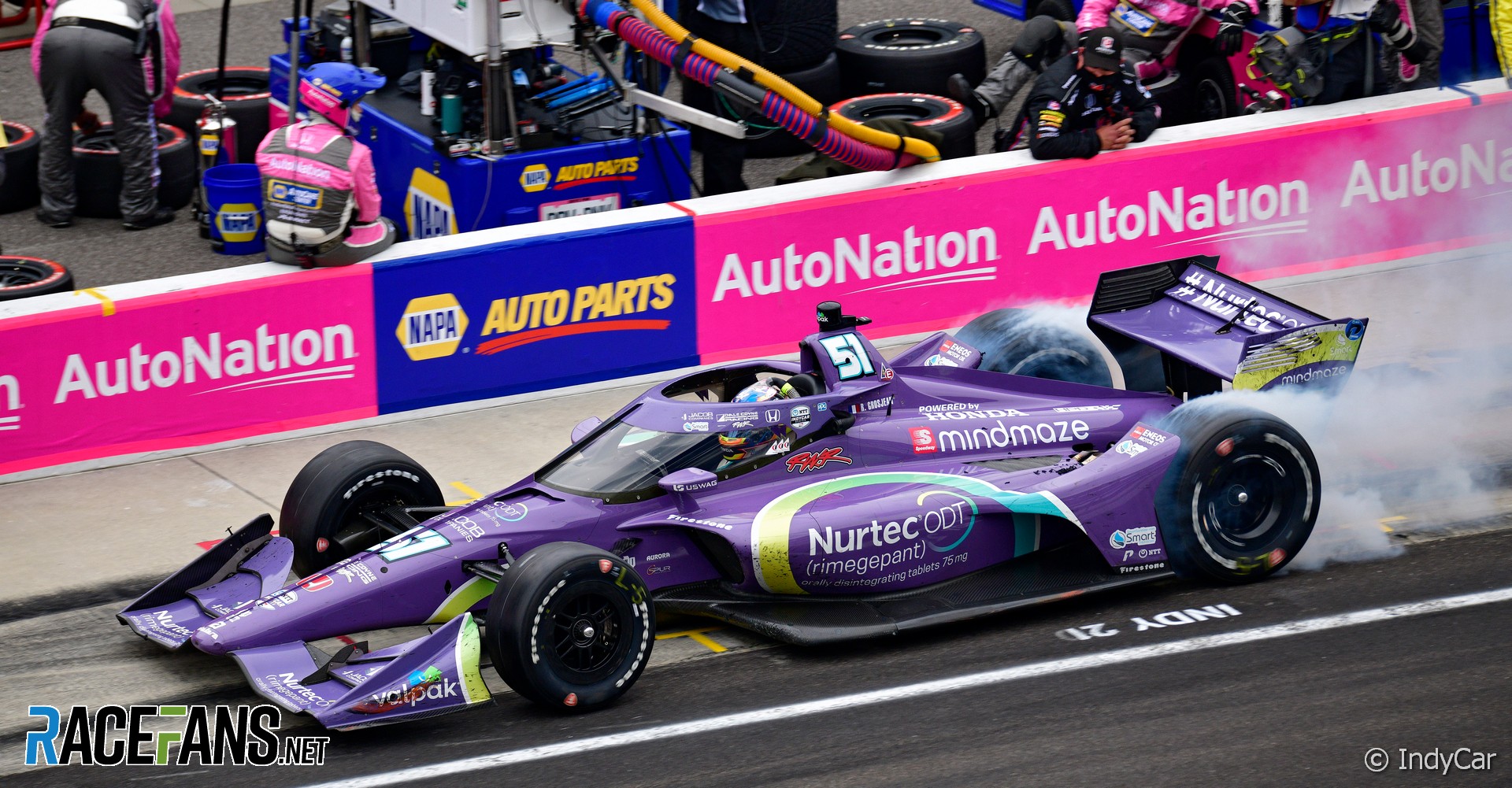 VeeKay came from seventh on the grid to beat pole-winner Grosjean to victory in Saturday’s Indianapolis Grand Prix.

Grosjean admitted his rival made better strategy choices during the race. But the Coyne/Rick Ware driver was pleased with his efforts after qualifying on pole position and taking second place in the race.

“We’ve had a strong car all weekend,” said Grosjean in the press conference following Saturday’s race. “We were leading the race quite easily in the first stint. We got a bit unlucky with traffic and back markers. I think that cost us a chance to go for the win, but also Rinus was quite fast on a different strategy. The right one, I guess.”

After taking his first pole position for 10 years, Grosjean capped off the weekend with his first single-seater podium since the 2015 Belgian Grand Prix.

“Yesterday I felt amazing in quali,” he said. “This morning in the warm-up we didn’t get quite it right and we made some changes for the race, and that worked well.”

He handled his first two-wide rolling start and restart as a race leader without difficulty, keeping his lead both times. “I think I did a pretty good job at the first rolling start leading the field, kept myself first through the first corner and then the restart felt a little bit more natural to me, so that was good, as well. And the car was very, very nice.”

Attacking IndyCar is a unique challenge for any driver, even one with 181 Formula 1 grand prix appearances under their belt. Grosjean said he’s learned a lot over the course of his first three races.

“What I learned from Barber, race one, was that from lap one to lap 85 or 100, wherever we’re going, you need to push every lap,” he said.

“In Formula 1 normally you do the race start, you push a few laps and then things settle down and you manage the fuel and your tyres, you look at the gap. Whereas here, different strategy, yellows, pit closing and so on, there could always be someone coming a little bit out of the blue.”

Grosjean led much of the first half of the race before Veekay emerged as his main threat for victory.

“Rinus was super fast in pre-practice one as well as in the warm-up in the cooler conditions so I knew he was going to be good,” said Grosjean. “He didn’t quite make it to the Fast Six, meaning he had some more [softer] red tyres available for the race, and he started on black.

“When I was catching the slower car, he pitted early from the blacks and then got on reds and gets him freer, and I knew they were under different strategy, and it was going to be tough.”

Had the strategy worked out to Grosjean’s advantage, he could have become the first Dale Coyne Racing driver to win since Sebastien Bourdais on the streets of St Petersburg in 2018.

While Grosjean’s jostling with Takuma Sato at the end of his second stint played out visibly on camera, and struggles on the black-sidewall primary compound tyres eventually cost him the lead at the start of the third stint, ironically it was time spent behind Bourdais during the fourth and final stint of the race that sealed his second-place result.

“We were a little bit less competitive on the blacks today, and also on the last stint I got stuck behind Sebastien Bourdais, [who] is a super good driver. He was on a new tyre, I was on old reds and I couldn’t pass him for a long time until he actually locked up and went straight into turn one. I kind of killed my tyres and I could see Rinus about four, five seconds ahead and didn’t get a chance to come back to him.”

“So that’s what I learned, you just have to push all the way. Even when you have seven- or eight-second lead on the first stint doesn’t mean you’re going to win the race.”

Grosjean will now hand his car to Pietro Fittipaldi for the Indianapolis 500 before returning to the cockpit at the double-header Detroit Grand Prix on June 12th-13th.

“I still think there is a few areas we can work and improve,” he said. “That’s what we’re going to do. Obviously everyone is going to be busy the next two weeks for the 500, but it’s a great way to start the month of May for Dale Coyne Racing by RWR and a great way for me to give the car to Pietro Fittipaldi, the 51 car, and for him to have a good month of May.”