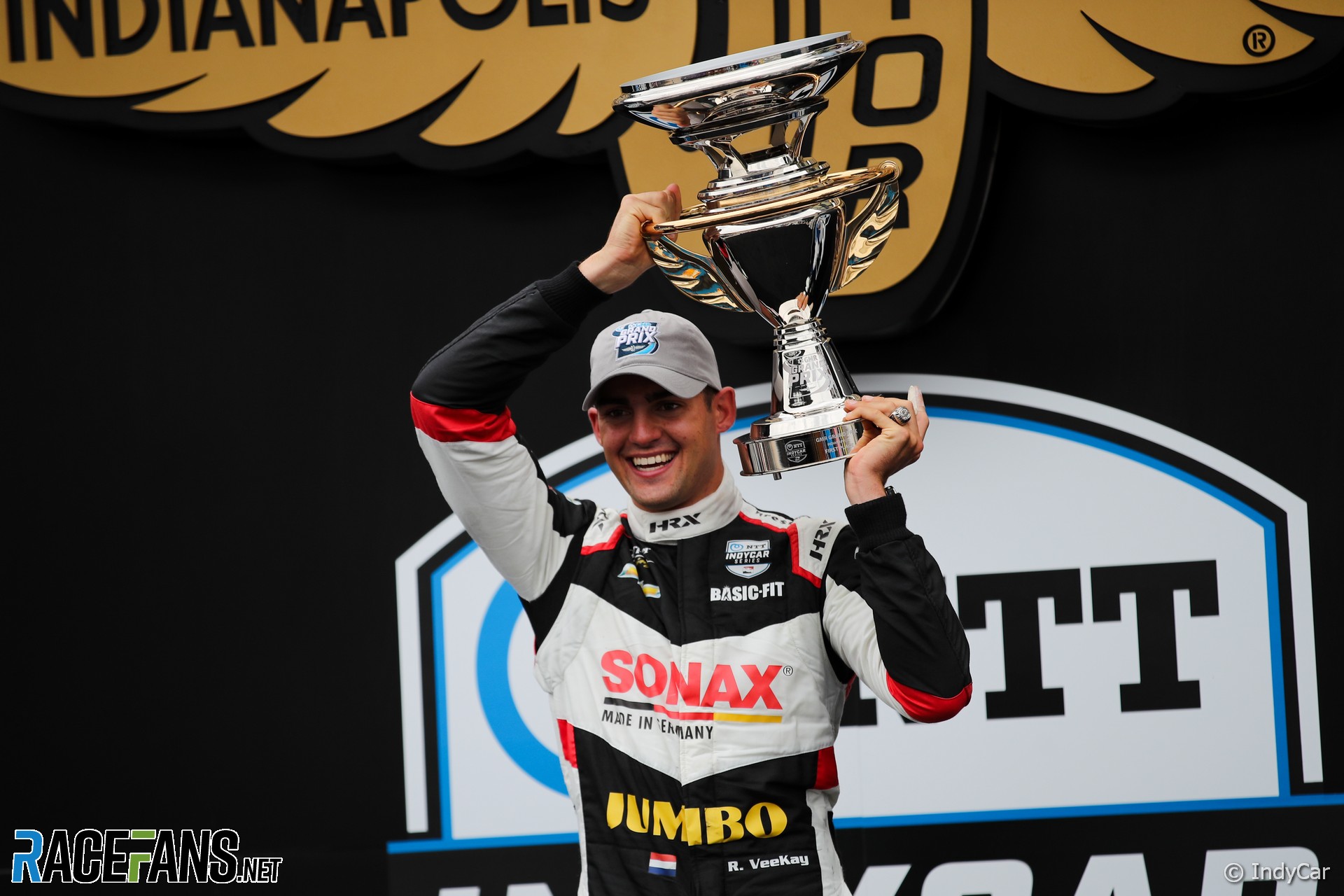 Rinus VeeKay became the third different first-time winner in the 2021 IndyCar Series yesterday, doing it in style with a commanding second-half performance in the Grand Prix of Indianapolis.

“It was an amazing day,” remarked the 20-year-old in a post-race press conference. “Definitely one I will remember for the rest of my life.

“We had an awesome start to the weekend. I knew we had the car, we were so fast. I’m so happy for the team, so thankful. I couldn’t have done it without them.”

VeeKay grew confident he would secure his first career victory during the third stint of the race, He’d already wrestled the lead away from pole-winner Romain Grosjean, undercutting his rival at the second round of pit stops, and gaining time as Grosjean lost several seconds trying to negotiate his way through traffic.

After the third round of pit stops, VeeKay was once again able to undercut Grosjean and take a lead of up to 10 seconds, as Grosjean found himself unable to clear the lapped car of Sebastien Bourdais.

“It felt like I could drive away from him,” said VeeKay. “I had a very, very nice gap to him so I kind of took it easy, tried to save a little bit of the tyres, even though it was hard to keep them going.

“We got there, saved some fuel at the end, and everything was awesome, like perfect down to the millimetre for the team. I don’t know how many times in a row they have given me a great strategy.”

That surge to the front may not have even been possible were it not for VeeKay’s daring overtake through the middle of Ganassi drivers Alex Palou and Jimmie Johnson on lap 41. By overtaking Palou for net second position at the time, it allowed him to start closing the margin to race leader Grosjean before his second scheduled pit stop.

“Well, I saw they were coming out of pit lane, but I knew they were team mates, so they had cold tyres,” explained VeeKay. “I knew I had to get by and kind of get a gap. Alex defended on the back straight. Jimmie drove the normal line. There was just about one car width space between them and I went for it.

“I knew there were a lot of marbles on track, so didn’t want to get the tyres too dirty, so I stuck it between there. I know Jimmie is a smart driver, same for Alex. [I] kind of hoped they would see me, and they did. I was very happy that I could stick that move, and definitely gave me a big adrenaline kick.”

VeeKay said his strategy and well-honed set-up aided his rise through the field. “We had awesome pace, which really helped make the strategy work,” he said. “Passing was easy because of the pace.

“Every time someone came in my path I could attack and go for it. That really put a few cars between me and Romain at the end, which gave me a lot of comfort. Definitely a nice way to win with a little bit of margin, and I could kind of breathe at the end, so that was very nice.”

A late, brief shower didn’t put VeeKay off his stride. “I could see the rain on the aeroscreen, but it didn’t seem like it would give a big impact. So I took it a little easy on the brake zones, but corner grip felt just how it should be. I’m very happy it stayed dry at least.”

For VeeKay’s team, Ed Carpenter Racing, a return to the top step of the podium has been a long time coming. It’s the team’s first since Josef Newgarden dominated proceedings at Iowa Speedway in 2016.

“Everyone knew at the team that they could win a race, that we could win a race,” said VeeKay. “But we just had to show it. Today was finally the day, and everyone in the world can see that Ed Carpenter Racing with Rinus VeeKay are race winners.”

VeeKay wants to channel that motivation towards a sweep of both the Grand Prix of Indianapolis and the Indianapolis 500, a feat accomplished two seasons ago by Simon Pagenaud.

“I’m very keen to try to sweep the month of May. That’s of course my goal. The mentality and everyone’s confidence is super-high at the team, so I think we can definitely go for that win. We’ve had an awesome car last year, and Ed Carpenter Racing has showed the last few years that they have the car to win the 500.

“Ed Carpenter Racing makes very, very good Indy 500 cars, and everyone is super motivated. It’s the biggest race of the year for them. To finish off the Indy Grand Prix just before with a win is a big, big confidence boost for everyone at the team.”